Mack vs. Donald, Fields is That Guy, McVay's Moment, and Other Bears Bullets Skip to content 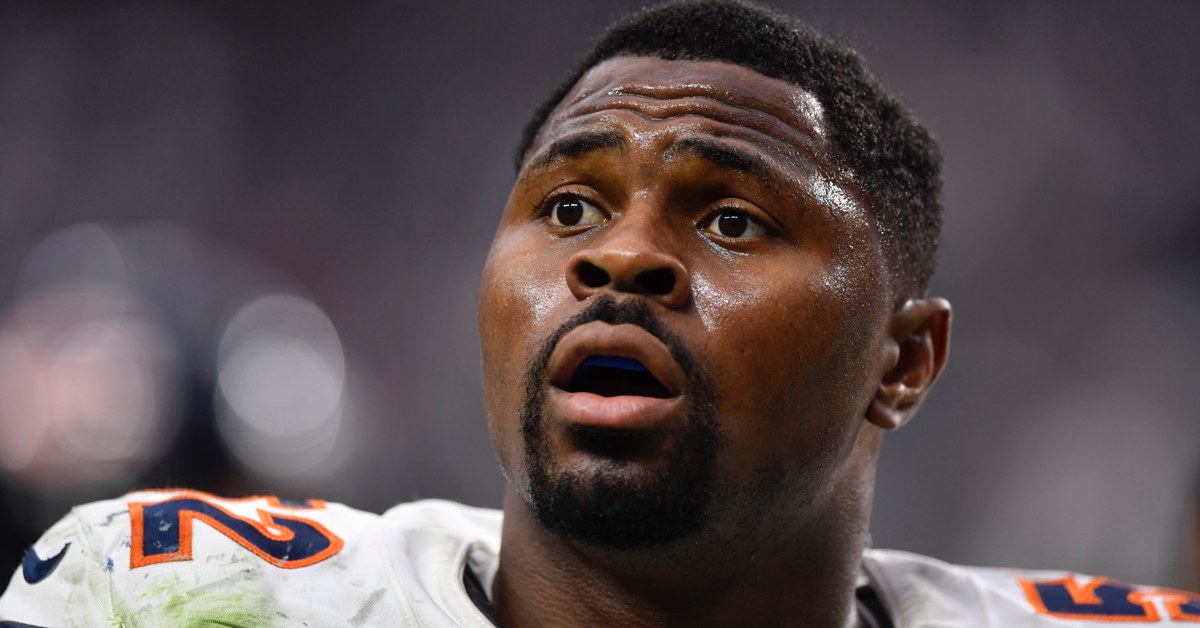 I’ve given the half-time show multiple watches since the Super Bowl came to an end. One thing I’m mad about is that I didn’t catch Dre on the piano keys briefly paying homage to Tupac. That looping of “I Ain’t Mad at Cha” before getting into Still D.R.E. as a finale was elite. What a moment for hip-hop finally getting its moment in the sun.

•   “As Rams’ Sean McVay outfoxes NFL, Bears’ Matt Eberflus opens tenure chasing him” is the headline accompanying this from Jason Lieser piece in the Sun-Times. And to me, it really captures the essence of the thing. It’s way too early to know if the Bears got the hire right or wrong. But the Bears zigging with a defensive-leaning head coach when an offensive-minded one just won the Super Bowl makes for a fascinating follow moving forward. Hope it works out for the Bears. Because, if it doesn’t, there will be plenty of I told you so… pieces raining down from the football writer-sphere.

•   It was pretty wild to see rumors about McVay and Aaron Donald stepping away from the NFL. And hours before the Super Bowl, no less. So while that chatter came to a halt when the game kicked off, it was only a matter of time before it kicked back up again:

If #Rams won't give McVay $20 million a year a network sure could says @ProFootballTalk Mike Florio — he knows how hard it is to win a #Superbowl and now he's done it. It's a REAL possibility

Sean McVay told me before the Super Bowl that he is committed to coaching. But at the least, this bears watching. https://t.co/J0EfDsiida

•   … but I am realizing how demanding it is for these coaches. Granted, they put plenty of added pressure on themselves by creating a work-life balance that pours far more into the work part than into the life part. Remember when the NFL instituted shut-downs at the start of the coronavirus pandemic, leaving coaches and GMs relaying how that unexpected downtime gave them opportunities to spend time with their families that otherwise would’ve been used on football activities? Maybe there is some newfound perspective here. Sure, there is a real chance that McVay could be using this as leverage to cash in with an extension after a championship-winning year. But let’s not lose sight of the human element in this. As Rapoport says above, this situation bears watching.

•   The Bears won’t play the Rams in 2022, which marks the first time since 2017 that these teams won’t be on each other’s schedule. After winning the first showdown in 2018, the Bears have lost the last three games — each by at least 10 points. Talk about trending in the wrong direction. What’s worse is that the Rams went from scoring 6 points in 2018 to 17 in 2019, 24 in 2020, and 34 in 2021. If you’re looking for an image representing two ships passing each other in the night, there it is in the previous two sentences. While the Rams were glowing up and improving with each season that passed, the Bears were regressing defensively while staying frustratingly stagnant on offense. That is not a winning combination.

•   I understand what Mark Potash is getting at, but this tweet ain’t it:

•   Potash is right. One team has gotten considerably more bang for their buck. Except Potash is looking at the wrong pile of money. Mack did his thing. Not at Donald’s level, but Mack has been putting it down. Check the work history, friends. Three Pro Bowls, a first-team All-Pro selection in 2018, a nod as the NFL’s third best player entering the 2019 season (and *DURING* the 2018 campaign), second-team All-Pro and top-20 player in football status in 2020, and recognition as the second-best defensive player in football before the 2021 season. It’s almost as if the Bears got what they paid for in Mack. But they can’t say the same about how they spent elsewhere.

•   And that’s where the difference lies. The Rams threw down on Jalen Ramsey, Robert Woods, Cooper Kupp, Matthew Stafford, and Andrew Whitworth to be playmakers and game-changers around Aaron Donald. Meanwhile, the Bears were unable to match those contributions with their transactions. Not even in the slightest. Simply put, Eddie Jackson, Allen Robinson, and Robert Quinn weren’t enough to elevate the Bears. It wasn’t even close. Spend better, spend smarter, invest more, and win championships. That’s what the Rams did. And it is what the Bears failed to do. It’s among the biggest reasons Ryan Pace is Chicago’s former general manager.

•   All that brings me back to a thought I had in the wake of the Super Bowl. What should make it even more frustrating is that the Rams are a model of what it should like when a team goes all-in. To heck with the cap situation. Win now. Forget about early round picks. Use those to get certified studs, then trade back to supplement those studs with depth via draft picks on rookie-scale contracts. Put ’em on the field. Let ’em play ball. See if your best can beat their best. And deal with cap issues and financial concerns later.

•   For better or worse, the NFL is a win-now league. It takes creativity, gumption, and a bit of luck to get where the Rams were able to finish the 2021 season. But these wholesale rebuilds in large markets don’t seem like something that will fly. Not with how the Bengals went from being one of the NFL’s worst teams to one drive away from potentially winning the Super Bowl. And definitely not with how the Rams were able to escape an all-time rough contract situation after the Jared Goff extension and win the Super Bowl within the same NFL calendar year.

•   This sounds about right to me:

•   Johnathan Wood has an ongoing series evaluating Justin Fields’ rookie season and piecing together what it could mean for his future. Wood does a remarkable job weaving in data to help explain what we’re seeing with our eyes. The first piece is an introduction to the series that also examines where Fields is throwing the ball. As a follow up, Wood focuses on Fields in  play action. There is plenty of good stuff in each post, so dig in.

For those people of there questioning if Justin Fields is the answer for the #Bears at QB, check out what @JuiceHerbert has to say about QB1. Watch the full interview tonight at 10:30pm on @GNSportsTV. @WGNNews #SBLVI #DaBears pic.twitter.com/toLy15RBYI

•   Do you think Patrick Kane put this tweet in the group thread today or nah?

On this day in 2015, Patrick Kane did this to MAF!
At least they can be friends now. #Blackhawks pic.twitter.com/7xqLhMQFQz

•   I don’t understand how MLB can come to the conclusion of less baseball being for the good of baseball, but that’s where it is at right now:

REPORT: MLB Seeking Ability to Dramatically Lower the Number of Minor League Players An Organization Can Have – https://t.co/hMHs7YEVYC pic.twitter.com/XEih3WD89O