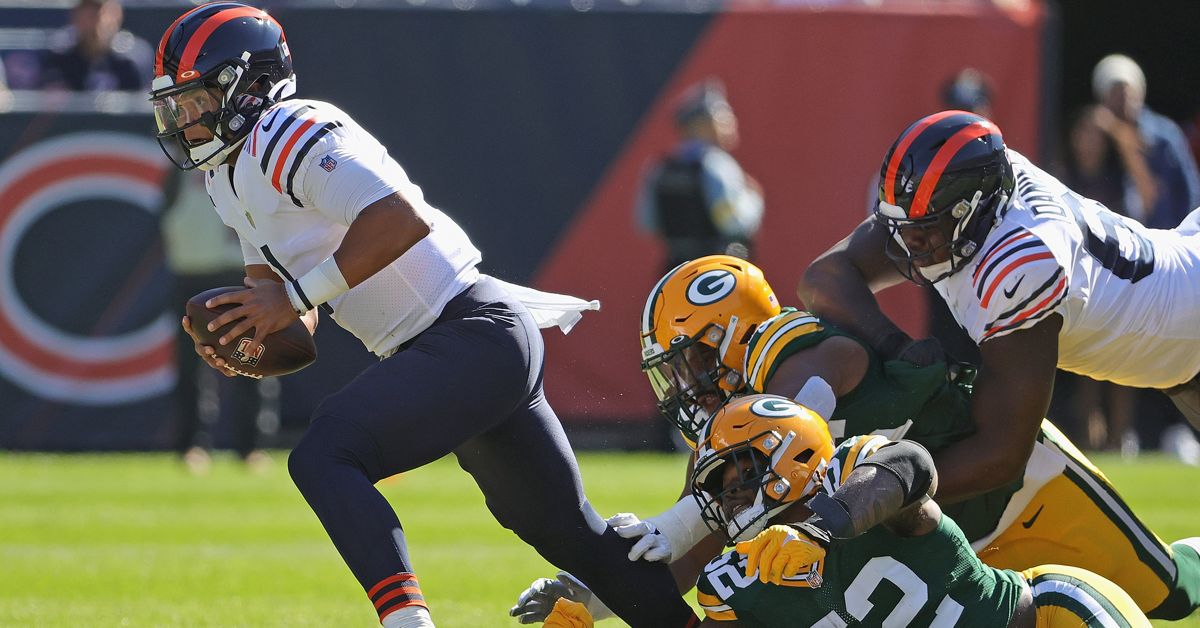 Taking a day trip to Wisconsin in February sounded better in my head before the term “snow squall” entered my lexicon.

•   Johnathan Wood (Da Bears Blog) explores Justin Fields’ explosive plays in his latest installment in a series focusing on the development of Chicago’s QB1 as a rookie. And if you’re looking for a sign it’s OK to dream on a better future, here it is. These two sentences say so much:

“With any QB other than Justin Fields, the Bears have been one of the NFL’s least explosive offenses over the last three seasons. When Justin Fields was playing, he was able to overcome a poor scheme and weak supporting cast to lead the NFL’s most explosive rushing attack and produce explosive passing plays at an above-average rate on a per-play basis.”

•   Fields isn’t polished as a quarterback. Assuming you experienced the highs and lows during his rookie season with us, then you already know that. Fields is far from a finished product. It’s almost as if you could understand why the previous regime was wanting to slow-play Fields’ development. But the tools (athleticism, arm strength, foot speed) are loud and undeniable. Plus, there is an uncanny ability to create splash plays out of seemingly nothing. There is so much to dream on, but still a ton of growing that must be done to reach the heights and lofty expectation set before him. Hopefully, a new vision and plan set forth by this new regime takes advantage of his skills better than his prior coaches.

•   Inject these 7 minutes, 33 seconds of Fields highlights straight into my veins:

•   Those highlights could’ve been twice as long if Fields had better and more consistent pass-catchers to throw to as a rookie. Why the Bears drafted a quarterback and teamed him with a receivers room full of volatility is beyond me. But at least the front office that put the group together is no longer in Chicago. With that in mind, Alyssa Barbieri (Bears Wire) has 10 receivers the Bears should target in free agency. I reckon the top two options (Davante Adams, Chris Godwin) won’t even make it to the market. And frankly, the same can be said for WR3 on the list (Mike Williams). But down the line, there are intriguing options beyond the ones we’ve been discussing to this point.

•   I can’t front: Part of me wonders what this Bears offense would’ve been looking like had they gone in a different direction than Anthony Miller when they executed the trade-up in 2018. Miller was the apple of the Bears’ eye in 2018 and the team took him with the 51st overall pick. But D.J. Clark went 61st to the Jaguars. Michael Gallup went 81st to the Cowboys. Both are possible free agent targets for these Bears this offseason. Stud Chiefs offensive tackle Orlando Brown Jr. went 83rd. Stellar tight end Mark Andrews was off the board with the 86th pick. I don’t want to play the what-if? game, but the Bears trading capital to move up and miss out on players who turn into solid pros is a trend that needs to stop if they want to turn this thing around.

•   Feels like a good year to need pass-catching targets:

•   Andre Dillard, a first-round pick in 2019, is someone Alex Ballentine (Bleacher Report) believes would make an ideal trade target this offseason. Dillard is becoming to the Bears what Brian Roberts was to the Cubs once upon a time in being that guy who is often connected to a team in a trade because of the sensible fit but nothing happens. I suppose things can change with Dillard, but he’s been thrown in as a possible trade option going on a year.

•   It appears as if the Bears are getting analytical:

Freid comes from the quality control / coaching side, not a straight “‘lytics” nerd per se…

But scouting opponent tendencies, self-scouting tendencies, researching trends within the game of football is the original ‘lytics and hugely important of course. Hopefully more to come https://t.co/XaqoQOwwmX

•   The Bears should be taking any and all opportunities to add football minds to their front office. All hands on deck, baby!

•   I love choose your own adventure games:

•   There are no wrong answers here. But what offense is scoring against Reggie White and Lawrence Taylor rushing the passer, Charles Woodson and Ed Reed lurking in the secondary, and Brian Urlacher ranging from sideline-to-sideline? Even The Greatest Show on Turf would struggle to gain yards against that collection of talent.

•   The headline accompanying this Rick Morrissey column in the Sun-Times hits hard: Can Aaron Rodgers please just leave us alone?

•   This has been an agonizing offseason for MLB fans:

That March 5 date is a clue: MLB is hoping a deal can be done by February 28, and then Offseason Part Two will be just a couple days. Literally. Guys have to report AND then be ready for games, so this is MLB saying, yeah, the second offseason is gonna be short or non-existent. https://t.co/bd47t6OV30

•   In the Blackhawks world, Jonathan Toews (concussion protocol) went on IR on Friday. That’s bad. But where some see crisis, others see opportunity. So where news of Toews going on IR stings, it also opens the door for rookie Lukas Reichel to return to The Show in a corresponding move. Go get ’em, rook!

Me every time I'm reminded where All-Star Weekend is: pic.twitter.com/LDEOlpxIRa