Cunningham and Poles Make the Rounds, Aggressive Blocking, and Other Bears Bullets Skip to content 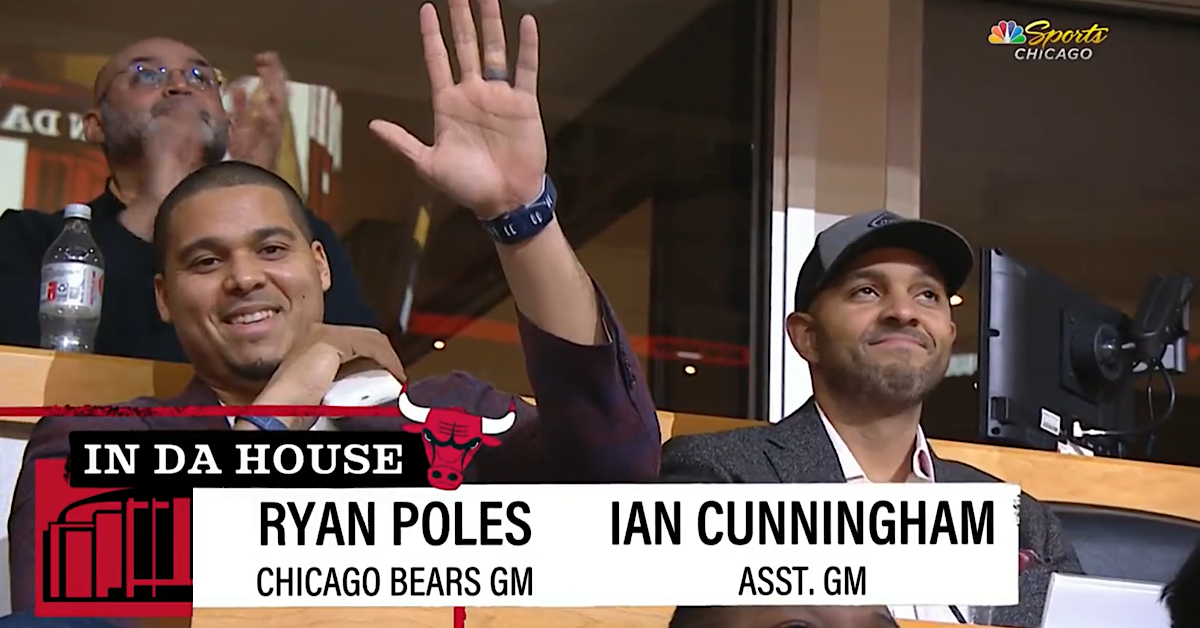 I don’t know what I did to deserve starting my week by taking the “L” on a Nike SNKRS shock drop, but I’d like to pay a penance for my actions. Sigh. I don’t want to feel this way again.

•   Eight days earlier, Poles and Cunningham were taking in a Bulls game together. I imagine suite seats are a perk of taking over the highest-ranking front office gigs in the Bears’ organization. But it is interesting to see these two out and about together. Poles and Cunningham must have a strong mutual admiration for each other to be doing public rounds, which is truly something when you consider they hadn’t previously worked together. After seven years of Ryan Pace essentially being off the radar, seeing the Bears’ leadership in public is refreshing.

•   As a side note, I wonder if these two are making their rounds to get a better feel for the city’s sports landscape. Nothing wrong with going around town and figuring out what works and what doesn’t. It is easy to lose perspective when one reaches a new level of the working world. However, it might be easier to gain new perspective (so long as you’re willing to allow yourself to see it) when given an opportunity to rise through the ranks. Hopefully, Poles and Cunningham can glean something useful from their endeavors.

•   The Poles-Cunningham tandem have a lot on their plate this offseason. You can check out a timeline of important dates for the 2022 NFL offseason and when to expect Bears happenings here.

•   We were recently discussing a potential Justin Fields-Chris Olave reunion because of a recent NFL mock draft, but this throws a bucket of water on that dream:

#Bears at 39 is probably too late. Sweet spot for Olave feels like that 22-28 range. https://t.co/MPWpCEI0uJ

•   On the one hand, Olave has long felt like a lock to go in the first round. And for what it’s worth, The Ringer and PFF both have Olave with a Round 1 projection in their most recent mocks. But this Ryan Wilson mock at CBS Sports doesn’t have Olave as one of the four receivers going in the first round. My early read here is that there is a glob of first-round caliber receiver prospects in this class, but not all of them will go on Day 1. There will be some slippage into Round 2, which could benefit the Bears on draft weekend. Maybe it won’t be Olave. But there is a real chance a player who is worthy of a first-round grade is available for Chicago at pick 39. So … let’s keep an eye on that as this pre-draft process develops.

•   Fittingly enough, the Bears end up with Boston College center/guard Zion Johnson in PFF’s mock draft. Johnson who has been garnering first-round buzz in some circles and could be a first-rounder if he tests well and grades out positively at the upcoming NFL Scouting Combine. Again, this is worth monitoring during this calm before the storm period.

•   I’m a bad liar, so I’ll leave it at this — I’m smitten with the idea of the Bears landing Johnson in this draft:

I Hope the Bears Paid Attention to Zion Johnson and the Rest of the Senior Bowl’s Stud Offensive Linemenhttps://t.co/87y6cldTXx pic.twitter.com/7Yp68idglL

•   Thirty years ago today, I imagine people were at their office water coolers discussing “Homer at the Bat” — arguably the greatest episode The Simpsons has ever put out. Of course, they probably didn’t know that just yet. That’s because on Feb. 20, 1992, the “Homer at the Bat” was released.

•   The Bulls, both past and present, were well-represented at last night’s NBA All-Star Game:

•   It was on Super Bowl Sunday when it hit me that I was finally in the age demographic where the halftime show was featuring my favorite artists. A week later, it was watching the Elam Ending of the NBA All-Star Game that had me realizing (and reflecting on) the evolution of basketball. The years pass and the game evolves. And in the end, we’ve gotta keep passing it on so the next generation can see it through as we did.