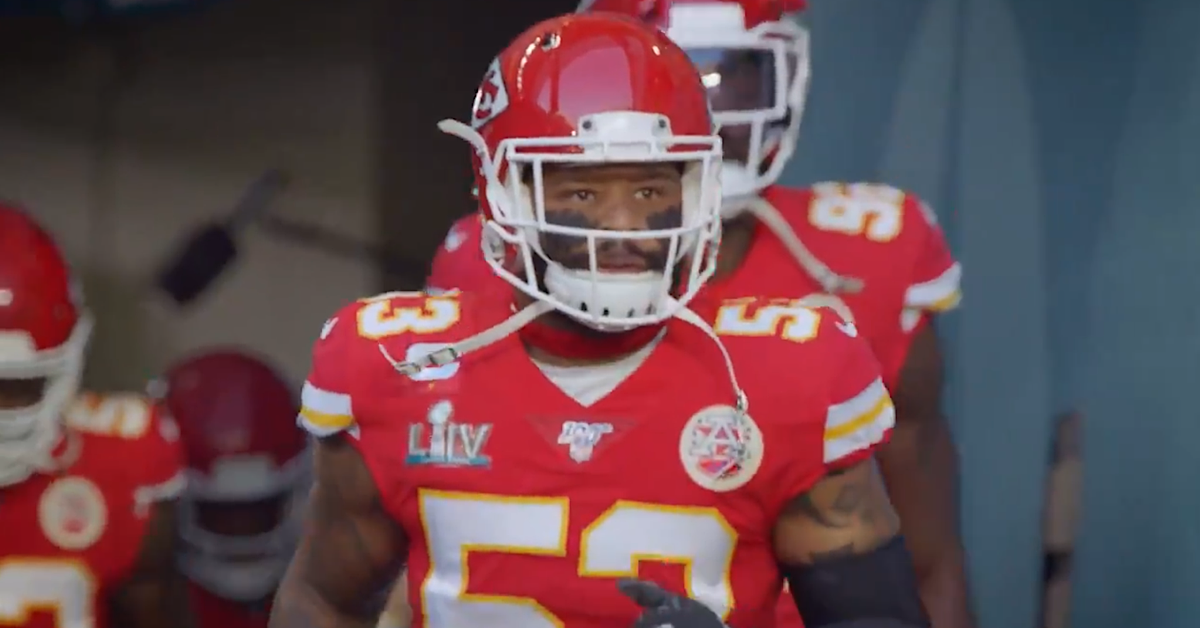 While there’s an obvious (and crucial) focus on fixing the offense this offseason, the Bears’ cannot allow that process to obscure the needs on defense. That’s especially true, when you consider the schematic change from a 3-4 to a 4-3. In other words, not only do the Bears have needs on that side of the ball, they have them at new positions that weren’t a priority for the last regime because it was running things differently.

Thankfully, a new transaction period is on the horizon. The 2022 NFL Draft is 65 days away and free agency opens up in earnest in a hair more than three weeks. However, before we get there, teams around the league will begin clearing the decks and creating salary cap space. And one cap casualty should already be on the Bears’ radar:

Anthony Hitchens, a starting linebacker during the Chiefs’ Super Bowl run, has been released. It’s a move that Jason Fitzgerald (OverTheCap) reports creates $8.44 million in cap space for Kansas City. With rising second-year player Nick Bolton set to take over on a full-time basis, the Hitchens cut shouldn’t come as a shock. But it should be on the Bears’ radar now that Hitchens is a free agent.

The easy connection to make is that Hitchens’ most recent stop was in Kansas City, which is where Ryan Poles was before becoming the Bears’ new GM. But that isn’t the only Bears connection worth noting. That’s because Hitchens was a fourth-round pick by the Cowboys in 2014. Hitchens spent four years in Dallas, all of which were spent being coached by Matt Eberflus. And in case you aren’t up to date, Eberflus is now the Bears’ head coach. While Hitchens was in Dallas, Eberflus held the titles of Linebackers Coach and Passing Game Coordinator. In other words, Eberflus and Hitchens should know each other very well. Same for Poles and Hitchens. With that in mind, maybe there is a fit in Chicago.

With Roquan Smith projecting to be in more of a Darius Leonard or Lance Briggs role in this new-look Bears defense, Poles and the front office need to re-work the linebackers room. If the plan is to shift Smith outside in a move that would fully take advantage of his unique skill set, the Bears would need to fill the middle linebacker spot. This is where Hitchens makes sense as a fit. Hitchens, who turns 30 in June, has 119 games (107 starts) under his belt. Moreover, he has playoff experience and a Super Bowl ring. On top of all that, Hitchens has experience in the style of defense the Bears figure to be running in 2022 and beyond. That isn’t inconsequential for a defense in the midst of a transition phase.

And it sure sounds like he’s got that leadership stuff down:

"All of our goals are still in front of us." @AnthonyHitchens pic.twitter.com/m9S8gyVS1z

Between his experience and history with this new Bears regime, the fit is a sensible one. Maybe Hitchens could be to these Bears what Danny Trevathan was for the previous regime. If you’ll recall, the Bears brought in Trevathan from the Broncos, where he crossed paths with John Fox. The combination of familiarity with Fox and a new role in Chicago was helpful in moving the Bears away from Mel Tucker’s defense and into the scheme Fox and Vic Fangio were running. So while we’re talking different regimes, there is precedent with this type of signing.

Hitchens might not be a long-term option. After all, soon-to-be-30-year-olds rarely are seen in that light. But that doesn’t mean Hitchens couldn’t be a useful piece of the puzzle. Hitchens could be the type of target who could hold down the fort and be a conduit who helps a scheme needing new pieces. At the end of the day, his name merits monitoring as the offseason rolls on.