2022 Offseason Outlook: Darnell Mooney and the Receivers Skip to content 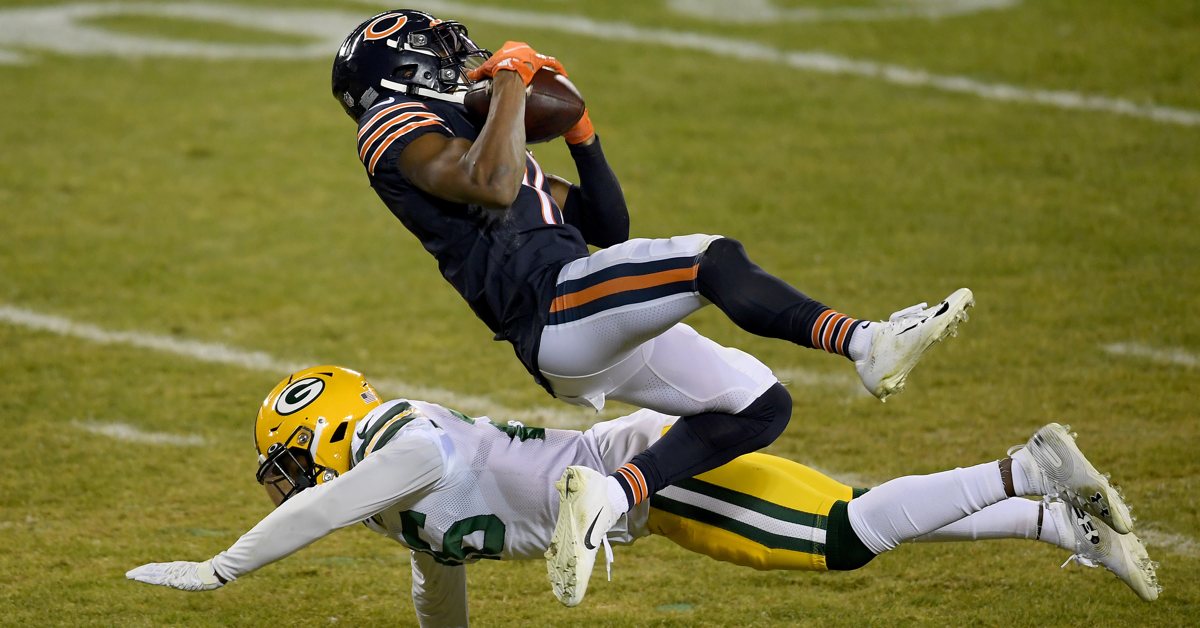 One bit of good news is that the Bears are bringing back their leading receiver from the 2021 season. Mooney had a breakout campaign as he set new career-bests with 81 catches and 1,055 receiving yards. But the bad news about the Bears receivers room is that he is the only one with ample experience returning in 2022. The only other Chicago pass-catcher under contract for ’22 is Newsome, a sixth-round pick in 2021 who didn’t make the team out of camp and had just two catches (five targets) in three games. And then there is Webster, who PFF has down for playing just one offensive snap in 2021. Laughable.

This position room might as well be a blank canvas.

Losing Robinson should sting more than it does. However, a lackluster season (38 catches, 410 yards, 1 TD) of production has done wonders to sink his free agency stock. As did this viral moment from the Bears’ loss to the Packers late in the season on Sunday Night Football. And even though a return can’t be ruled out, a clean break figures to be in line for Robinson and the Bears.

In theory, the Bears could cut Newsome and create $825,000 in cap space. Technically, parting ways with Mooney could create $824,488 in cap savings. Although, that would be on par with one of the most asinine things this new management could do. Maybe cutting Webster to save $965,000 would make sense if the Bears were really up against it. Otherwise, there’s nothing here.

Oh … and this guy could be available soon:

Wide receiver is a “top priority” for the Bears. Luckily for them, the free agent market is stacked with realistic options. My apologies if you were hoping to read about Davante Adams or Chris Godwin in this section. Those two are likely to remain with their respective teams. But it doesn’t mean there aren’t potential fits elsewhere.

In addition to the quintet above, the secondary and tertiary tiers of the receiver free agent market has any number of players who would represent clear upgrades from what Chicago had last year. Take your pick. JuJu Smith-Schuster could conceivably be had on a one-year “prove it” deal. And with a 1,400-yard receiving year under his belt, he is a free agent with a high ceiling. Will Fuller V is perennially one healthy season away from having a breakout. Russell Gage and Cedrick Wilson Jr. are players who could thrive with bigger roles on new teams.

There had been some chatter about Olave dipping into the second round, but this put an end to that:

But on the other hand, Purdue’s David Bell — who seems more likely to land as a Day 2 receiver — put on a clinic as a pass-catcher in drills at the Combine:

Living the dream. @DB3LL showing them how its done! pic.twitter.com/0BP1cbQ4IT

After seven years of watching Ryan Pace trying to cobble together a receivers room, I’m looking forward to seeing how a new general manager puts one together. In fact, there is nothing I look forward to more than seeing how differently new GM Ryan Poles goes about providing Justin Fields with targets to throw to on Sundays. Pace failed at surrounding Mitchell Trubisky with talent as a rookie in 2017, then did the exact same thing in 2021 before drafting Fields. Few things are as infuriating as watching the same regime make the same mistakes over and over again.

At least Poles has publicly acknowledged the need to get Fields one premier receiver.

Of course, how he goes about it is still to be determined.

For my money, I might be more willing to spread the wealth on multiple targets than to go for broke on one player. For example, Davante Adams projects to get $25 million per year on his next deal (which will more than likely come from the Packers). At that rate, the Bears could sign JuJu Smith-Schuster (1/$8M), Marquez Valdes-Scantling (2/$20M with a $10M AAV), and Cedrick Wilson Jr. (2/$12.5M, $6.25M AAV) for roughly $24 million.

Not that I want to go down the Pace rabbit hole again, but I’m not averse to giving credit where it is due. In the 2018 offseason, Pace executed an ideal plan by bringing in Allen Robinson II and Taylor Gabriel as free agents before adding Anthony Miller in that spring’s draft. Following a similar blueprint would go over well, especially if it comes with better results.