A David Montgomery Extension Is a "Strong Possibility," But What Level Makes Sense for the Bears? Skip to content 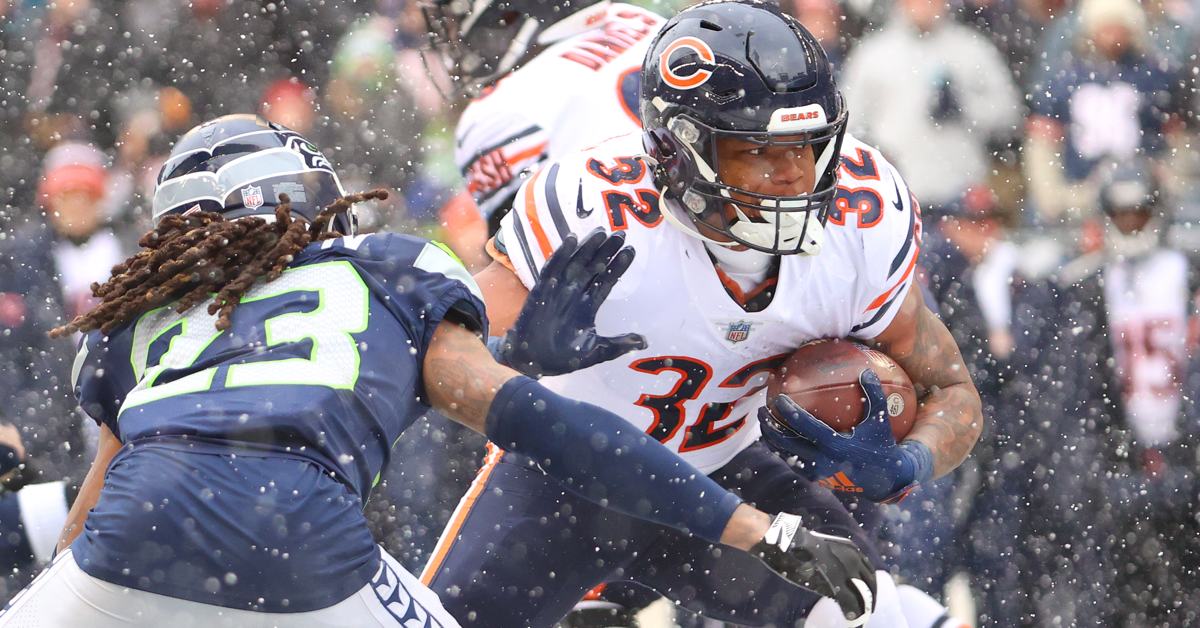 David Montgomery has been a key cog in the Bears overall plan-of-attack for the last several seasons. Even when things were sputtering offensively, the Bears could always lean on him. In fact, at times, Montgomery was Chicago’s entire offensive identity. But now that he’s about to enter his fourth year as a pro, Montgomery is eligible for an extension, and that leaves the Bears at a bit of crossroads.

Fortunately, Brad Spielberger, an authority on everything NFL cap-related, thinks a deal could happen. And is even able to take a guess at the range.

“We know he is a great locker room guy. He would eat glass if Ryan Poles asked him to eat glass. All those things, when you are trying to establish a culture, and trying to get a locker room to buy in, those reasons and rationales aren’t always smart, but I really do, I think he’s going to get extended. I think it’ll fall in the 10 to 12 million per year range, maybe even more frankly. How it ages? Probably won’t be great but I do think that is a strong possibility.”

That’s some mighty specific reporting on the potential financial framework for a deal ($10-$12M) and the likelihood of getting one done (“strong possibility”). Let’s dissect it a bit.

Technically speaking, the Bears DO have the cap space to get something done in this range. In fact, they have $25,329,726 in available space entering this offseason. And for reference, a deal in the $10-12M range annually lies among the bottom tier of the league’s top-10 highest paid backs. In other words, in isolation (and at these levels), an extension would not exactly break the bank or hamstring the Bears down the line.

By contrast, Packers RB Aaron Jones is in just his second year of an extension, and they’re already re-working his deal to clear space and kick some dead money down the road:

Per @FieldYates, Aaron Jones converted his $3.75M roster bonus & $100k of salary into signing bonus (+ two void years) that freed up over $3M of cap space for the #Packers.

Something to keep in mind … to avoid.

Like Jones in Green Bay when they gave him a new deal, the Bears do have an intriguing understudy behind Montgomery on the depth chart in Khalil Herbert. And he does need to be part of the conversation. Indeed, Herbert displayed flashes of brilliance during his rookie season, and that’s certainly made it easy to dream on a larger role for him down the line (remember that four-game stretch in October, when Herbert was averaging 19.5 carries, 86 yards, and 22 touches per game?).

And, of course, we’re no stranger to the increasingly common practice of teams churning and burning through backs like nobody’s business in the modern NFL. But that doesn’t quite tell the whole story for the Bears.

Montgomery is a leader on this team and in the locker room. And when that’s the case, it’s a little tougher to push the eject button, especially when the entire organization is already going through massive amounts of change. So any reluctance to slowly transition away from Montgomery that you’re registering here from me is rooted in more than simple loyalty or fandom. There’s actual, legitimate strategic concern (it’s a problem the Bears have dealt with in the past, with respect to then-GM Phil Emery and Brian Urlacher, in the transition post-Lovie Smith).

But again, that’s just one of many variables. So … where does that leave the Bears and Montgomery?

Essentially, Poles and the front office must try to thread the needle. If this group feels strongly about retaining Montgomery, they should do so. But they shouldn’t over-extend (pun-intended) the length of the deal. Nor should they piece together a deal that could be damaging to the Bears’ cap situation down the line. In other words, it probably needs to be a pretty clear win for the organization (though that’s obviously easier said than done). Poles can look north towards Green Bay for what to avoid when it comes to dealing with running backs.

As one might expect, it is challenging to find the balance in a contract that (1) rewards a home-grown player and team leader while (2) fitting comfortably within cap restraints.

Nyheim Hines’ extension with the Colts has the makings of a potentially comparable deal. The three-year pact came together in September 2021 and is worth $18.6 million (including $12M in guarantees). Those AAV and total value numbers put Hines as the 11th highest-paid back in the league. And from the team perspective, it is worth underscoring how Indy can get out from under the deal in 2023. Doing so would create $3.29 million in cap space with a modest $3 million dead money hit.

Perhaps Montgomery could ask for a hair more just to get into the top-10 in both. Remember, Spielberger projects a $10-12M AAV to come with a possible Montgomery extension. But I struggle to see comparisons that could net him a deal in that range. Three years into his career and Montgomery has just one 1,000-yard rushing season. And he has eclipsed 10 total touchdowns just once. It’s just not enough of a track record to merit a hefty extension, no matter how much we like him and value his leadership.