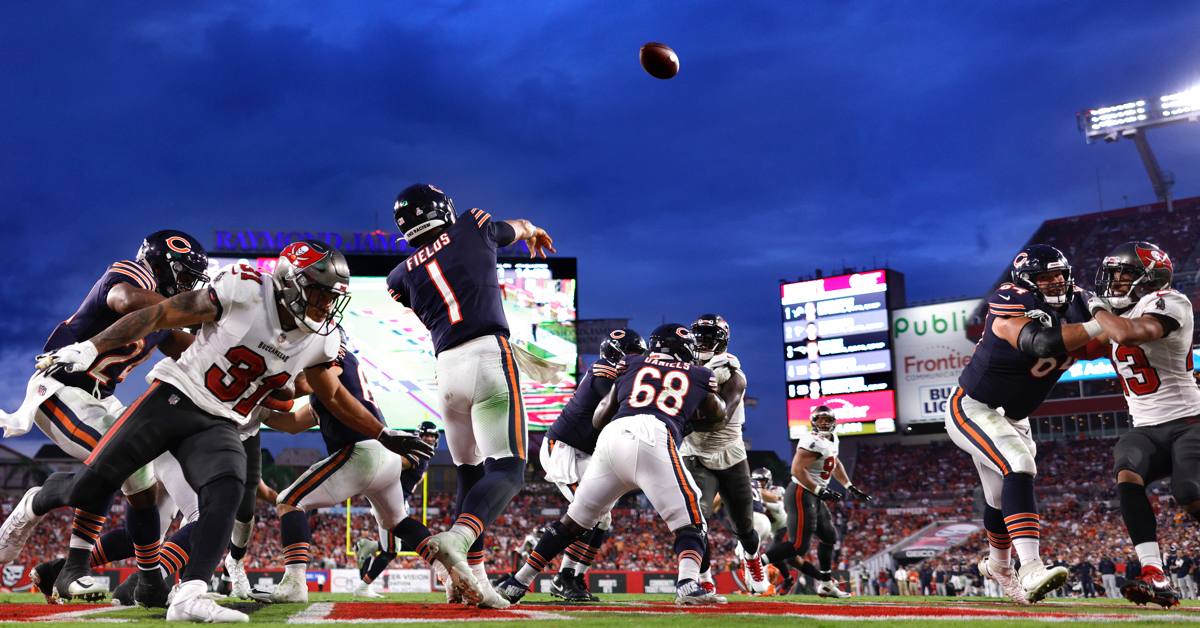 March Madness ended before it could really get started for my Salukis. But at least I got to see some old friends along the way. Onward.

•   Today is Justin Fields’ 23rd birthday, which is reason enough to share some highlights in celebration:

•   It was an up-and-down season for Fields, to be sure. But it was more entertaining than the 7 TD-10 INT ratio would otherwise suggest. Fields had flashes. There were moments in which he was able to display his high-end athleticism and incredible arm strength. But between limited practice reps with the first unit, inconsistency along the offensive line, and Fields’ own issues with ball security, the steady hand you’d want from a quarterback wasn’t always there. All that before we even begin discussing the role of shoddy coaching and game-planning. The future remains bright for Fields. And if you need evidence as to why that is the case, just check out the highlights above.

•   Did you know that CBS has 14 receivers among its top-100 NFL Draft-eligible prospects? PFF has 16 in its top-100. Not that we needed to share this reminder, but this feels like a good time to get Fields some receiver help.

From NFL Now: The #Cowboys will try to trade WR Amari Cooper, and they've had discussions with receiver-needy teams. If not, they'll move on and try to keep their own FA WRs. pic.twitter.com/ROHQU8DLoc

•   The Cowboys are reportedly “likely” to release Cooper, whose departure from Dallas would create $16 million in cap savings. But before they cross that bridge, the Cowboys find themselves shopping Cooper to see if they can recoup some draft capital before letting a productive pass-catcher leave. It isn’t that there aren’t receiver-needy teams. Certainly, the Bears would be wise to have an interest in the asking price. But it is difficult to pull the trigger on a trade for a player you know is about to hit the free agent market. Why trade for someone you know will cost you just money in a few days?

•   Heads up Illinois! Mobile sportsbook registration is finally back TODAY! So if you want to get the best Illinois launch promos, make sure you hit up that link! Thank you for allowing this #ad!

•   And then there is this: Waiting out the Cooper market makes sense because of the compensatory draft pick formula. Signing a player like Cooper (who gets cut) will not count against that formula. But players who are becoming unrestricted free agents because their contracts run out when the new league year begins do count. The Bears have 25 unrestricted free agents. They could play the compensatory pick game well if they play their cards right. There will be a competitive market for Cooper, but the juice could be worth the squeeze to (1) help Fields by giving him a stud to throw to and (2) aiding the team’s long-term future by angling to net some future contemporary draft picks.

•   One last thing — If no team trades for Cooper, it can be taken as a sign that there isn’t a team willing to pay a $20 million per-year price tag. At minimum, it shows that teams aren’t willing to trade to take on a contract that pays a receiver $20 million a year. With that in mind, we should re-adjust what our expectations for a Cooper deal could be. Using Pro Football Focus’ contract projections, perhaps Cooper’s next deal is in the range of Chris Godwin (4/$65M,  $16.25M AAV) or Mike Williams (4/$68M, $17M AAV).

•   But as Alex Shapiro (NBC Sports Chicago) points out, the Bears might have enough reasons as to not target Cooper in free agency.

•   In any case, there are reasons to want to a high-profile receiver with a knack for making big plays:

IT'S HERE: The 2021-22 Deep Ball Project is finally out. See how accurate your quarterback was throwing the ball downfield! https://t.co/N8pEINPcww pic.twitter.com/dqUqLysPJ4

•   Fields has the third best accuracy percentage on deep-ball throws. What I like most about this breakdown is that it looks at it doesn’t punish the quarterback for good throws that weren’t completed due to things out of the thrower’s control. On the other hand, what I like least about this statistic is that it serves as a reminder of how little the Bears did to give Fields receivers who could haul in his deep passes.

•   One receiver with deep threat ability who won’t be hitting the market soon is Tyreek Hill, who NFL reporter Aaron Wilson reports is in extension talks with the Chiefs.

•   Imagine being a college student who has to go to Fargo, N.D. to cover THIS GUY:

Former #NDSU wide receiver Christian Watson hits the field for the NFL Combine this afternoon. This is just a snippet of what he did for the Bison. pic.twitter.com/fO8uYHLr8P

•   Not that we didn’t already know, but this receiver class is deep as heck. Teaming a prospect who has upside and a free agent who is already an established target could do wonders for this Bears offense.

•   This is certainly a noteworthy nugget from Jack Soble, a Mizzou football reporter, who shares that the Bears met with cornerback Akayleb Evans at the Senior Bowl:

For Chicago fans – Akayleb Evans met with the #Bears at the Senior Bowl. He said that it, like all his other meetings, went well.

•    Some might see the Missouri football connection with Matt Eberflus having been a long-time defensive coordinator for the Tigers before launching his pro coaching career. But that isn’t the only notable nugget from this. For starters, there were 106 Senior Bowl players who ere drafted last year. In other words, getting an invite to Mobile was a launching point. But more specific for our conversations is that Evans checks in as PFF’s 154th overall prospect. The Bears currently own the 147th and 149th selections in the upcoming NFL Draft, which would put Evans in a range where the team could conceivably draft him. And considering their needs at cornerback, it doesn’t take much of a stretch to see a fit.

•   All right, so we’re getting some changes to that MNF booth:

Former Monday Night Football analyst Brian Griese is leaving ESPN to become the Quarterbacks Coach for the 49ers, sources tell @SethWickersham and me. Griese and Kyle Shanahan have known each other for years; Griese played QB in Tampa when Shanahan was on the Bucs coaching staff.

With a chance of goals 😎 pic.twitter.com/wW9Z7kFaXi

•   The NHL Trade Deadline is gonna be something else:

The Blackhawks are in desperate need of an infusion of young talent. The acquisition phase should start with the impending trade deadline. #Blackhawks https://t.co/hZilJTTi8f

•   El Professor finds a place to get some work in while MLB continues to lock out its players:

Kyle Hendricks Found Himself a Place to Throw a Bullpen, Surrounded By Youth Games – https://t.co/CN0x861DwC pic.twitter.com/N1Gcy1LKjP

Vladimir Guerrero Sr. Not Only Can Still Crush It, But He Will Admire His Work Like No Other
https://t.co/ZEV5IWZ39O pic.twitter.com/6sriAP3w2B

•   No, the Bulls didn’t beat the Bucks. And, no, Grayson Allen was not locked up for his crimes against Alex Caruso. But this was cool:

•   Here is everything you need to know about sports betting in Illinois now that mobile sports book registration is FINALLY back in Illinois.

Mobile registration is finally back in Illinois! https://t.co/hHpALXuG0D

•   And, as always, a reminder to wager in a safe and responsible manner.