What Should the Bears Do About James Daniels? Skip to content 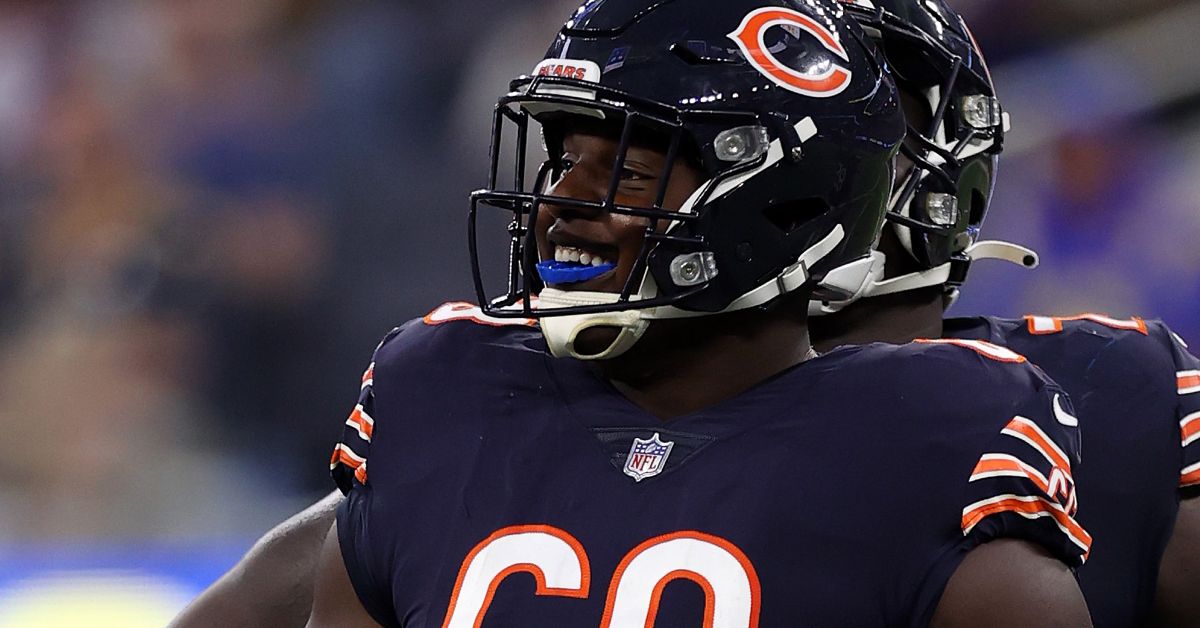 Building an offensive line in front of Justin Fields is the top priority for the Chicago Bears this offseason. Or at least, it should be. And getting off to a good start doesn’t take too creativity. For instance, the Bears could begin by retaining free-agent-to-be James Daniels.

While Daniels is expected to at least test free agency this offseason, that wouldn’t necessarily preclude him from returning to the Bears in 2022. Daniels has earned the right to explore his options, and we have no problem with that process. But if there is any mutual interest between these two sides, then Chicago’s new front office should try hard to do what its predecessors couldn’t: re-sign a home-grown draft pick and extend his stay with the Bears.

Good news on that front, as The Athletic’s Adam Jahns predicts Daniels will re-sign with Chicago this offseason. Bad news on that front, there isn’t exactly a consensus forming around that opinion. So I thought we could work through some of the Bears theoretical questions and options with respect to Daniels, to see how right the fit might be.

Would You Target Daniels If He Wasn’t a Bear?

In short, yes: If Daniels, 24, was on some other team before hitting free agency this summer, it wouldn’t take much to see the potential/fit.

A second-round pick in 2018, Daniels has been able to establish himself as a solid contributor at three different positions along the interior of the line. And while his best efforts were at guard, let’s not overlook his work at center, an experiment that was cut short essentially because of Mitchell Trubisky’s higher level of comfort with Cody Whitehair. Sometimes, I wonder if Daniels could’ve grown into the position had he been given time to develop in one place.

Of course, we could probably say that about either guard spot, too. Who knew starting a player at a different position on the line in three consecutive years would mess with their development?

The Franchise tag is probably a non-starter, with the projected number for offensive linemen being $16.698 million this offseason. However, I wonder if a Transition Tag could make some sense.

I suppose GM Ryan Poles could deploy a Transition Tag on Daniels in a way similar to what former GM Ryan Pace did with Kyle Fuller. Placing that tag on Fuller to reach out elsewhere, check out the market, and let another team set the price. If you’ll recall, it was the Packers who made the offer sheet for Fuller. And you might remember the Bears were quick to match. Chicago really let Green Bay do all the hard work to keep Fuller with the Bears. No messy negotiations. And the Bears got to keep their guy. Both parties were seemingly pleased with how the situation unfolded. Maybe there is another happy ending to be had with Daniels. The blueprint should be somewhere in a cabinet somewhere in Pace’s old office. I’m sure Poles could find it if he cares to do so.

Sometimes, re-signing a pending free agent before they hit the open market can be an option folks forget about. But re-signing Daniels before he can taste the fresh air of free agency could be one way to kick start the offensive line.

Daniels is PFF’s fifth-highest-ranking free agent interior offensive linemen this offseason. The site projects him to net a five-year deal that includes $24 million in guarantees and could be worth up to $10 million per year. That feels like fair market value for a good player, who could sign a multi-year contract and get a second free agent contract while still in the prime of his career.

I also don’t hate the message it sends to any other impending free agents (Hey, listen, this front office still values players, even if they were brought in by the old regime). Making it known that being part of the old guard doesn’t automatically put you on the chopping block would be a nice message to send.

To be clear, there might be a case for allowing Daniels to test free agency, even if the plan is to re-sign him. If Poles and Daniels’ representation can establish a good faith agreement to allow for a right to match an offer, then that could work like the Transition Tag without having to explicitly use the tag. Letting Daniels explore his options wouldn’t be the worst thing for him.

Oof. This is my least-favorite option, it exists.

Letting homegrown draft picks walk away at age 24 isn’t ideal. Few things bug me like drafting and developing a player, only to watch them thrive after leaving. Daniels is still young and his best ball could still be ahead of him. Because of what Daniels has already established and the untapped potential that remains, watching him walk away would sting.

But on the other hand, letting Daniels go could allow the Bears to spend significant dollars elsewhere. Splitting that money into other positions of need is a reasonable idea. For instance, using PFF’s projections, the $24 million in guarantees for Daniels could go to plugging holes at WR (JuJu Smith-Schuster on a 1-year deal worth $6.5M in guarantees?) and LT (Duane Brown projects to get $14.5M in guarantees on a 2-year deal at $10M AAV). You could fill in different player names and positions with any number of different options. And it would still leave $3 million to play with elsewhere. Just saying…

Rome wasn’t built in a day. And the Bears’ next Super Bowl champion won’t be either. But because of his age and accomplishments, Daniels is a the kind of player who fits the short-term plans, while not damaging the big picture.

At the end of the day, the Bears should build around Fields while he is on his rookie deal. That much we know. And considering the issues that complicated Fields’ development as a rookie, perhaps spending along the offensive line makes for a good place to start. But before exploring what could be on the market, checking in with Daniels is a sensible place to start.