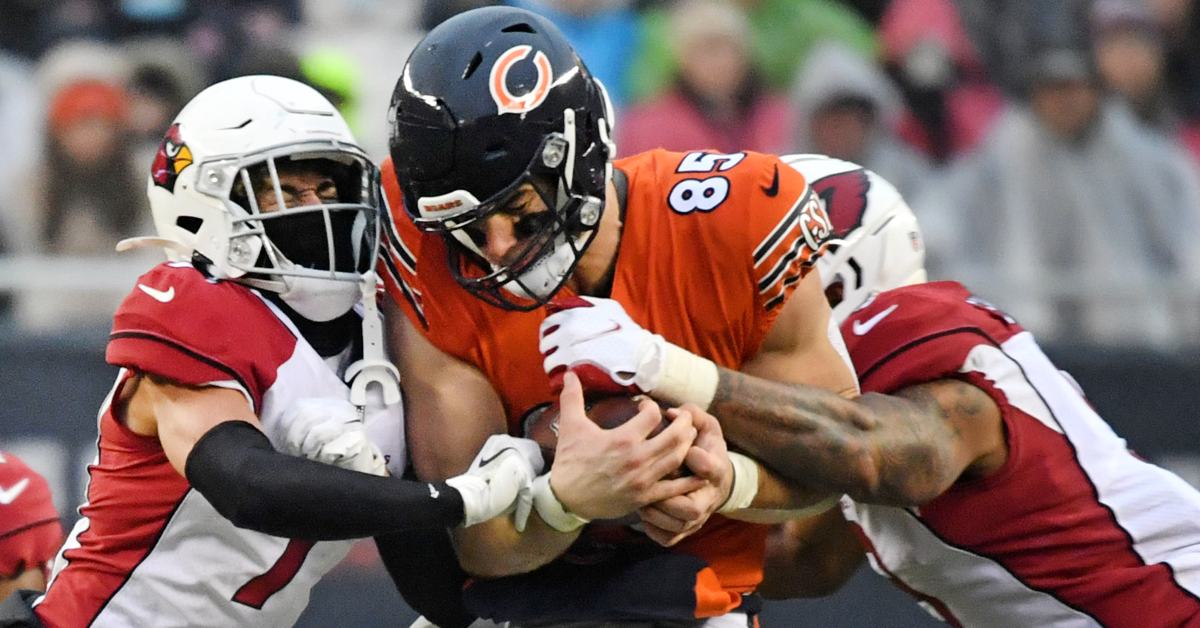 I’m almost embarrassed to admit this, but I will.

Yours truly does not have a Bulls jersey in his closet. Not one.

That will change soon:

Heads up! The DeMar City Edition is in stock AND on sale at Fanatics right now. Not sure how long these will last, so if you're interested, here you go: https://t.co/SXOh792DRV pic.twitter.com/wRCCVtjQdx

Someone who had a bunch of Jordan jerseys, that black-with-red-pin-stripes Rodman 91, Rose, and Gordon should’ve had someone from this group. But I didn’t. Thankfully, Eli dropped this in the group chat and it will help me go from not having a Bulls jersey to having one that I absolutely love. Thanks, buddy.

•   Less than 24 hours ago, I was opining about how the silence around the Bears was bugging me. It isn’t as if I was expecting them to be major players at this point of the offseason. They weren’t trading for a quarterback. Or bludgeoning their roster with cap-saving cuts. And they don’t have a first-round pick. So I suppose there are enough reasons as to why there is a hush around the team. Frankly, the Bears aren’t the only team that doesn’t have much shaking publicly. But I’d bet on that changing soon.

•   In fact, I think it is already underway with stuff surfacing about new cuts around the league and players being informed they are aren’t being brought back. We already chopped it up about Eric Fisher, who would make an intriguing left tackle option for the Bears. Fisher’s name is one of many names you probably already are familiar with who happen to be on the cusp of free agency. Safety Landon Cooper (Rapoport), guard Roger Saffold (Schefter), and a trio of linebackers — Bobby Wagner (Schefter), Jordan Hicks (Schefty), Troy Reeder (RapSheet) — come to mind.

•   Side note: I have an appreciation for a new regime coming in and not being a leaky faucet. Don’t get me wrong. I love the rumor chasing more than the next guy. But from an organizational health perspective, it is good that your business isn’t being thrown out all wily nilly. In due time, the rumors will fly and we’ll have a laugh about me mentioning anything about the quiet before the storm.

•  Considering the lack of trade capital, Alex Shapiro (NBC Sports Chicago) is right to note that trading for an explosive Seahawks receiver is tough to envision. Nevertheless, it is still a conversation worth having. If another team is shaking things up, every team should be doing its due diligence in trying to get whatever worthwhile talent that could become available. Just because the road looks to be treacherous doesn’t mean it isn’t manageable. Even still … free agency and the upcoming NFL Draft are the Bears’ best bets.

•   Kmet put up a career best 60 catches and 612 receiving yards in his age 22 season. He didn’t score a touchdown this past season. Then again, not too many Bears players were able to find pay dirt this season. The round numbers are nice, but I wish they came with something more inspiring than a 36.0 yards per game average. But on the other hand, it is hard to boost your stats if you’re not getting proper usage within the scheme. Considering Allen Robinson II’s decline, the Bears trailing often, and the uptick in usage (83% snap share), Kmet’s numbers should’ve been better. However, the game scripts, scheme designs, route concepts, and play calls were so bad, I can’t blame a player for not putting up better numbers. It is almost a miracle they performed as they did.

•   ESPN’s Adam Schefter provides an update to the Washington-Wentz trade, noting that the Colts are tacking on a 2022 seventh-round pick on top of sending their former starting quarterback a second-rounder. In the end, the Colts are getting a second- and third-round picks, and a conditional choice laterto not play Carson Wentz. Cool?

•   All one has to do to write a decent telenovela is to take Dallas Cowboys off-the-field stories and change the names:

My latest for ESPN: Woman sues Jerry Jones, alleges he's her father and that her mother signed a confidentiality agreement on her behalf when she was one year old: https://t.co/HD7IgtwsNX

If There is a Deal Today – Bite Your Tongue! – Free Agency Could Open Back Up As Soon As Tonight – https://t.co/EPE1PG1YF3 pic.twitter.com/F1GXvmOT4a