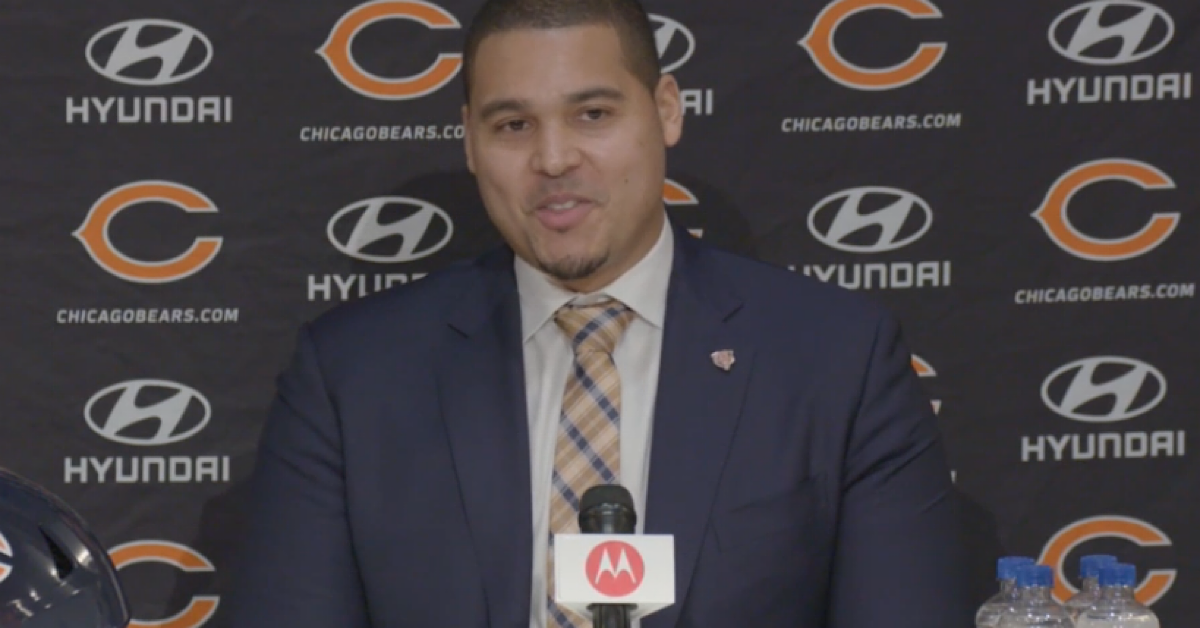 When is it too late to have breakfast food as your first meal of the day? Asking for a friend.

•   Things got really weird for the Bears yesterday. And from jump street, no less. Defensive tackle Larry Ogunjobi went from splash free agent signing to failing his physical and not joining the team. The immediate fallout was Chicago pivoting to defensive tackle Justin Jones and defensive end Al-Quadin Muhammad. Essentially, the Bears took Ogunjobi’s money and spread it to two different areas of need. In the grand scheme of things, this might be better for the Bears to spread some cash over two positions and with two players on the younger side of things. But the optics don’t look good.

•   There is no denying it is a rough look for first-year GM Ryan Poles to see his first big signing nullified by a failed physical. At some point, I’d like to hear Poles give a more expansive explanation. But sometimes, actions speak louder than words. And Poles’ actions essentially were an admission of a mistake, resulting in quick and necessary fixes. Does it look clumsy? Sure, I guess. But you know what looks worse? Sticking it through with a player because you hope he will be as healthy as you want them to be, only to find out they’ll never be that healthy. Frankly, I’d rather have a GM admit the misstep in the manner Poles did before it became too damaging for the bigger picture.

•   So … what’s it like to have your contract go up in smoke after failing a physical? Brad Biggs (Tribune) recalls Roberto Garza’s saga with the Baltimore Ravens, revealing some anecdotes that were unbeknownst to me at the time when it went down. For instance, I didn’t realize that Garza took it so personally with the Ravens after the deal fell through. That he felt that strongly is understandable, too. I’d bet Ogunjobi has some hard feelings over this. Hopefully, he gets healthy and a rewarding deal from another team.

•   Here is one thing worth pointing out on Poles’ behalf: His process to this point has been an extreme departure from what Ryan Pace was doing in the last few seasons. And because process is everything, there are underlying encouraging feelings within me. Think about Chicago’s recent offseason additions. Jimmy Graham, Robert Quinn, Andy Dalton, Nick Foles, Desmond Trufant, Marquise Goodwin, and Ted Ginn Jr. were among the 30somethings Pace brought in to round out his roster. Meanwhile, the Bears have brought in Muhammad (26), Jones (25), Lucas Patrick (28), Byron Pringle (25), and Equanemious St. Brown (25) to beef up around the edges.

•   Now, to be fair, I imagine Pace was doing this because he was in a win-now state-of-mind. But that he failed in identifying younger players on more cap-friendly numbers who could do the same gigs is why Poles is in his current situation. Then again, this change of direction bodes well for the Bears’ long-term plans. Getting some young players on short-term bridge deals helps with the roster turnover, but also has the potential to raise the floor from where this team was last year.

•   Am I bugged that the Bears haven’t addressed some of my offseason concerns with bigger splashes? A little. Not that I was expecting splashy moves out of the gate from the new GM. However, that the wide receivers room still doesn’t have someone who will make defenses think twice about funneling their coverages toward Darnell Mooney eats at me. Seeing the tight ends room feature just Cole Kmet and Jesper Horsted makes me think something should happen in that space. Lucas Patrick’s signing is nice, as it helps bring some solid versatility to the middle of the line. But there is still a gaping hole at right guard that still needs filling. In the end, I remind myself that no team fills all its offseason needs in the first week. And teams that win that first week of free agency often flounder downtime road. Perspective is key.

As of right now, the Bears list 49 players on their active roster. By May, they'll have 90. Save maybe 15-ish spots roughly for draft weekend and, yeah, these latter waves of free agency are going to be real busy.

•   As a reminder, next month’s NFL Draft will provide the Bears another opportunity to do good stuff in the player acquisition process. Bleacher Report’s Gary Davenport shares updated needs for Chicago’s football team and the NFL’s other 31 teams. As you might expect, offensive line and wide receiver needs are still at the top of the shopping list.

•   Hope for the future, especially if you own Justin Fields fantasy stock:

•   We love popular ex-Bears getting to play in situations that allow them to thrive:

The #Falcons have agreed to terms with WR/RB/S Cordarrelle Patterson for the do-everything guy to return to Atlanta, source says.

•   The football world lost an icon yesterday. May John Clayton rest in peace. And may his family and friends find strength as they deal with the passing of a loved one. In the meantime, let’s enjoy some memories and tributes:

John Clayton, one of our NFL insiders who expertly covered the league for more than 20 years at ESPN, died Friday at 67 after a brief illness.

We all learned something from "The Professor" over the years and we will miss him dearly. pic.twitter.com/bfiPCPUYZo

John Clayton was a treat on TV, inside the huddle, & had the best Sportscenter commercial.
He also helped grow @ESPN1000.
His hits w/ MJH were can’t miss.
1st seg news. 2nd seg questions from fans.
And then was a part of the show w/ @TWaddle87 & me for yrs. #RIP to a great man.

From one Hall-of-Famer to another, @mortreport’s touching tribute to John Clayton: pic.twitter.com/zrO7zkAONY

The PFWA mourns the passing of John Clayton. John was the PFWA's 19th president (1999-2000) and the organization's 2007 Bill Nunn Jr. Award recipient. "The Professor" was a friend to so many in our business. Our condolences to his wife Pat, family, colleagues and his many friends pic.twitter.com/66XLBeAXYF

•   Carlos Correa going to THE TWINS isn’t something I saw coming. Huh? Make it make sense:

•   A mixed bag of Bulls news on the health front:

We Could See Patrick Williams as Soon as Monday, News Less Great for Lonzo Ballhttps://t.co/49cnS3T5tC

•   The Brandon Hagel deal could be a big one for the Blackhawks:

The details of the full trade between the Blackhawks and Lightning are in! https://t.co/bVw8AzUyUk