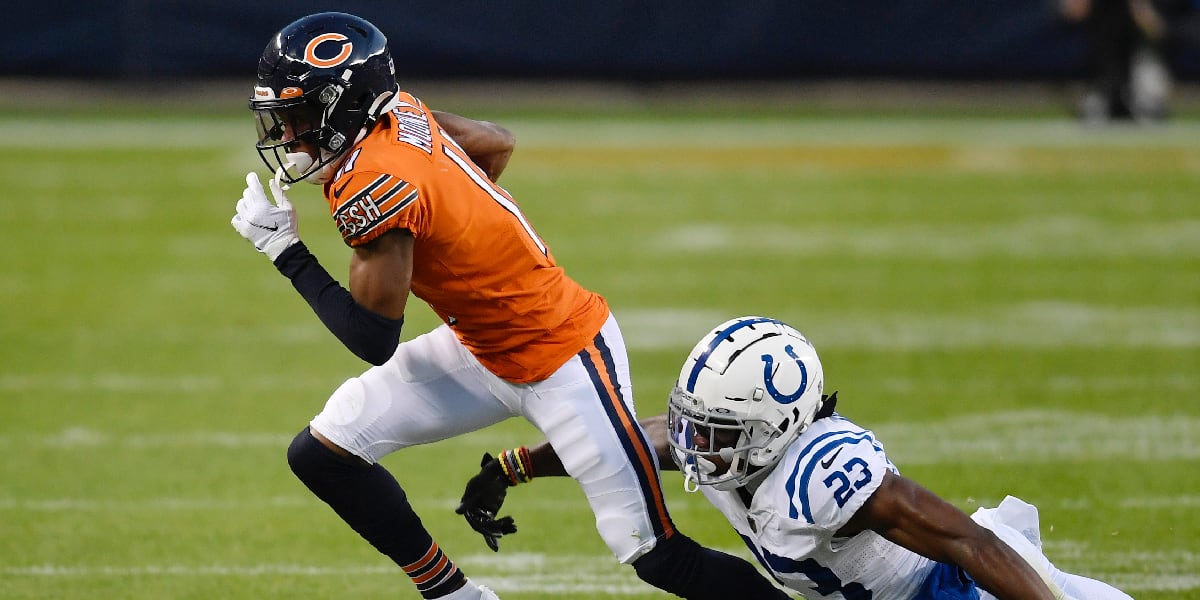 You couldn’t fool me on the foolingest day of your life, if you had an electrified fooling machine.

And even if you could, I wouldn’t try it today.

•   Has this Bears offseason gone as planned? No. But every time I see video of Justin Fields working out with Darnell Mooney, my optimism grows:

•   I was told there would be no math when I became a writer. Hence, this tweet was an eye-opener:

•   Considering the Bears’ current collection of targets, 168 targets is the bare minimum Mooney should be getting from Fields this upcoming season. And not only because he is the most accomplished receiver in the room at this time. It is clear that Mooney and Fields have a football thing going on between the lines. Once a QB builds a connection with a WR, things tend to sync up nicely (provided both players stay healthy). That they are continuing to build on what began last season during this offseason is one of the most encouraging developments to happen since the 2021 campaign closed its doors.

•   At minimum, working together now should help Fields and Mooney erase the ugly numbers Fields had when targeting Mooney lat year. Fields was 35/65 (53.8%) for 523 yards, 2 TD, and 6 INT. That’s just not gonna cut it when you’re throwing to your WR1.

•   Darnell Mooney has the elusively of that friend who owes you a six-pack of your favorite adult beverage after they lost a wager they were certain they’d win:

t-7th among WRs in that span 🔥 pic.twitter.com/NpN8u9MyWQ

•   I like to consider myself open to all sorts of different possibilities when it comes to NFL Draft weekend. But this scenario – however implausible it may seem – would cause me to rip whatever hair from my head:

Ryan Poles' conservative approach to free agency has me thinking he won't be aggressive in the #NFLDraft, but if Zion Johnson slips into the final five picks of the first round, don't be surprised if Poles tries to package both 2nd-rounders to move up and get him. #Bears

•   Are we so conditioned by Ryan Pace’s hijinks that we’d even allow ourselves to think this as possible? Breaking away from the Pace mindset has its challenges. But after GM Ryan Poles came come out publicly stating he wants more picks, I struggle to even think this could happen. I suppose it *COULD* happen. But as an old college pal once told me: “Anything is possible, but not everything is probable.”

•   There are 26 offensive linemen ranked between 32 and 150 on Pro Football Focus’ big board. I offer this up because five of the Bears’ picks come in this range. In other words, there is no need to trade up when there is a real chance that a solid value pick could fall in the Bears’ laps at any number of spots on draft weekend. Heck … maybe the Bears should trade back and collect more picks? Having a volume of selections could be valuable for a team that has as many needs as these Bears do right now.

•   I’m looking forward to listening to this:

As a former defensive coordinator, what would scare Bears coach Matt Eberflus the most about his new quarterback Justin Fields?

The play after the play.

Former Seahawks’ Pro-Bowl linebacker Bobby Wagner is signing a five-year, $50 million deal worth up to $65 million with the Los Angeles Rams, per league sources. Wagner is staying in the NFC West.

•   In case you’re curious, the Bears are at $16,129,133 under the cap. Gives them plenty of wiggle room should they choose to do something with it.

•   Adam Schefter isn’t going anywhere. Even though his contract was set to expire in a summer where he, Won, and Shams were high-profile news-breaking free agents in their respective fields, the long-time ESPN NFL insider has an extension with the Worldwide Leader in Sports, the company announced on Thursday. Good for him. Now, announce the Bears signing a new offensive line and receiving corps.

The Congressional committee investigating potential financial improprieties in the Washington Commanders organization specifically is exploring whether the team used two sets of books, via @byajperez. https://t.co/JCSbIyQgNX

•   One thousand games in a Blackhawks sweater for Jonathan Toews is a lot of ice time. Anyone want to add up the minutes?

•   The Bulls’ come-from-behind win against the Clippers was super wild. And it would’ve never happened without DeMar DeRozan, who fittingly enough signed with the Bulls while the Clippers were in pursuit to recruit him:

LOL: The Bulls Absolutely Mobbed DeRozan in the Locker Room After His 50-Point Gamehttps://t.co/y2HcspArnE pic.twitter.com/TMUHglNnM5

MLB Umpires Will Be Mic’d Up to Explain Replay Reviews This Season – https://t.co/c8B5JYxO4b pic.twitter.com/qPCHLZXCx9