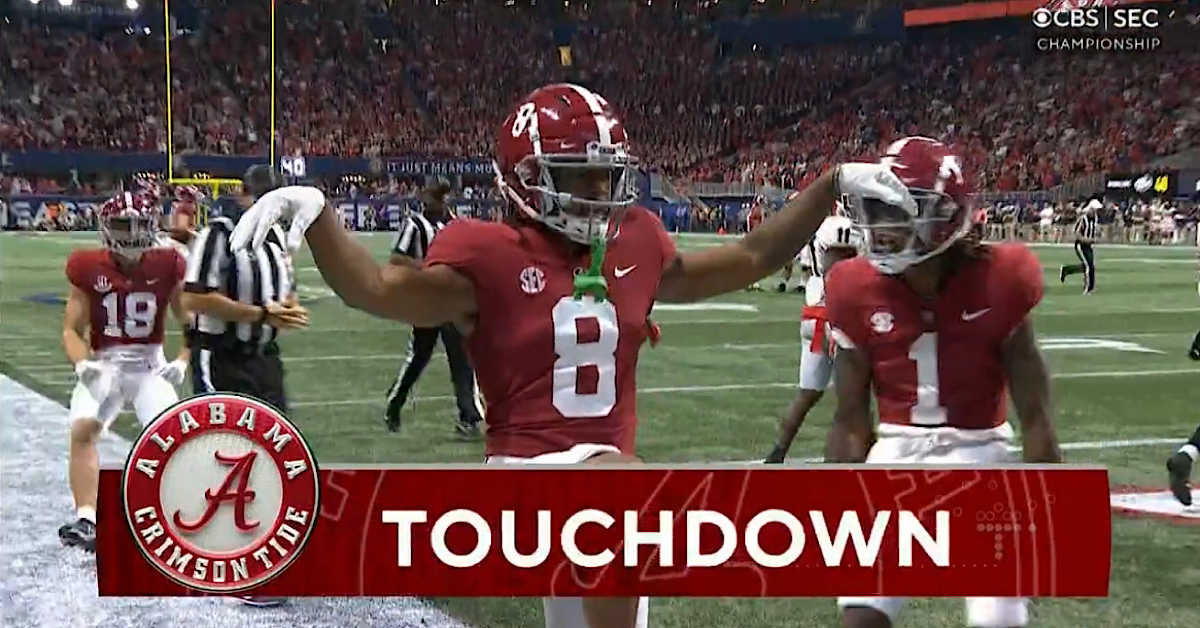 The NFL Draft is 24 days away and Chicago’s front office has more holes on the roster to fill than picks in the draft at their disposal. But that doesn’t mean the team can’t be aggressive in attacking their big picture needs. As Brad Biggs reminds us at the Chicago Tribune, GM Ryan Poles can help himself with two top-50 picks (even if they both come in the second round).

Biggs’ first mock draft sends Alabama cornerback Josh Jobe to the Bears with the 39th overall pick. He then doubles down with another Crimson Tide standout, putting wide receiver John Metchie III in the Bears’ crosshairs at pick 48. Not only are these picks intriguing, I think this type of selection (if not these specific players) could give us an inking as to the Bears’ long-term vision.

John Metchie III may be Biggs’ second mock choice for the Bears in Round 2, but he’s also the more intriguing prospect.

Metchie came up with 96 catches, 1,142 receiving yards, and 8 touchdowns before his knee injury in the SEC title game. Surely, Justin Fields would like a receiver to throw to who can put up those gaudy numbers. The 5-11, 187-pound receiver was a menace in the open field:

And he plays with a certain edge to his game, too:

Alabama WR John Metchie on why he takes so much pride in run blocking. He says Julio Jones is his favorite WR to watch and he has met with the #Titans pic.twitter.com/HEQGTYzL6A

All right, so where do I sign the Bears up for some of that?

If not for an ACL injury during the SEC Championship Game, Metchie wouldn’t even be on our radar as a second-round option because he’d be a virtual lock to go in Round 1.

But the ACL injury has knocked Metchie down a few pegs on draft boards. And with other prospects rising up the boards, it could very likely push Metchie into a place where the Bears are picking. If that is how the cookie crumbles, then targeting someone like Metchie makes sense. Rolling the dice on a player who might not be able to contribute right away, but projects to do so when given a full-go and a clean bill of health is something a team with its eyes on 2023 — think Eddie Jackson in the 2017 NFL Draft — should be open to doing.

Picking Josh Jobe with the 39th overall pick might ruffle some feathers. CBS ranks Jobe as its 10th best corner in the upcoming NFL Draft. ESPN ranks him 11th. Pro Football Focus has him as the CB16. In other words, taking Jobe 39th overall would look like a major reach. And, frankly, that would be a tough look for this front office. Then again, team rankings are always starkly different than what draftniks put out there. So maybe it shouldn’t be a surprise.

Between being a four-star recruit out of high school and his play while at Alabama, Jobe’s profile is intriguing. Few programs develop pro DBs like Nick Sabam and the Crimson Tide:

Wrote down ‘boundary bouncer’ beside #Alabama CB Josh Jobe in my notes. ‘Physicality’ is the one word that will repeatedly be at the top of his draft resume. WRs to the boundary side have to come with their hands ready. If not, he will throw you out of bounds. pic.twitter.com/2oDHXOopgD

.@AlabamaFTBL had only 2 defensive players drafted this year but that number will spike in 2022. Josh Jobe (@JoshuaMJobe) is the next early-round DB. Efficient in recovery & rarely panics. Competitive finisher routinely makes late-in-catch-process PBUs. #TheDraftStartsInMOBILE pic.twitter.com/PYf2FsVmfR

We are 28 days away from Alabama football!

Watch #28 Josh Jobe kick off the 2021 Rose Bowl with a HUGE hit:#RollTide pic.twitter.com/Rjkf7q8isP

So … what’s the rub as to why Jobe isn’t higher on rankings?

Well, for starters, Biggs writes Jobe is coming off a down year. On top of that, Jobe’s 2021 season was one in which he was playing through a foot injury. Even still, an AFC Scout told NFL.com’s Lance Zierlein that – even though Jobe gets credit for playing through the “busted foot” – it wasn’t enough to make up for a rough year. It is possible that the foot injury directly caused a slip in Jobe’s play. And to that end, the Bears could see Jobe as a value play with the 39th pick. But still … that would be a tough sell for some who would’ve rather seen the Bears go elsewhere. For the sake of that conversation, it is noteworthy that Tulsa OT Tyler Smith, Chattanooga G Cole Strange, and Memphis G Dylan Parham are still on the board and are ultimately passed by the Bears in this Biggs mock draft. As are defensive backs Jalen Pitre (Baylor safety) and Roger McCreary (Auburn cornerback). Just sharing that for additional context to go along with this mock.

What a Draft Like This Could Mean for the Bears…

Taking players with injury risk might not be something this administration is into doing at the outset. However, doing so could suggest how the new-look front office is positioning things to focus on the long-term future more than whatever short-term goals are right now. And maybe that is what the Bears want in the first place. Envisioning the 2022 season as a competitive one gets tougher with each day that passes without the Bears making an impact move that would essentially declare their intent to be in that hunt.

In the end, if the Bears come away with multiple future impact starters in Round 2, then their efforts will be applauded. Yes, patience will required in order to properly see this through. But the juice could be worth the squeeze in the end, even if picks get ridiculed initially in some corners.

All in all, this mock is a doozy. So I’d encourage you to check it out in its entirety.:

The #Bears have plenty of needs and are without a 1st round draft pick.

They can find some help with two 2nd round picks.