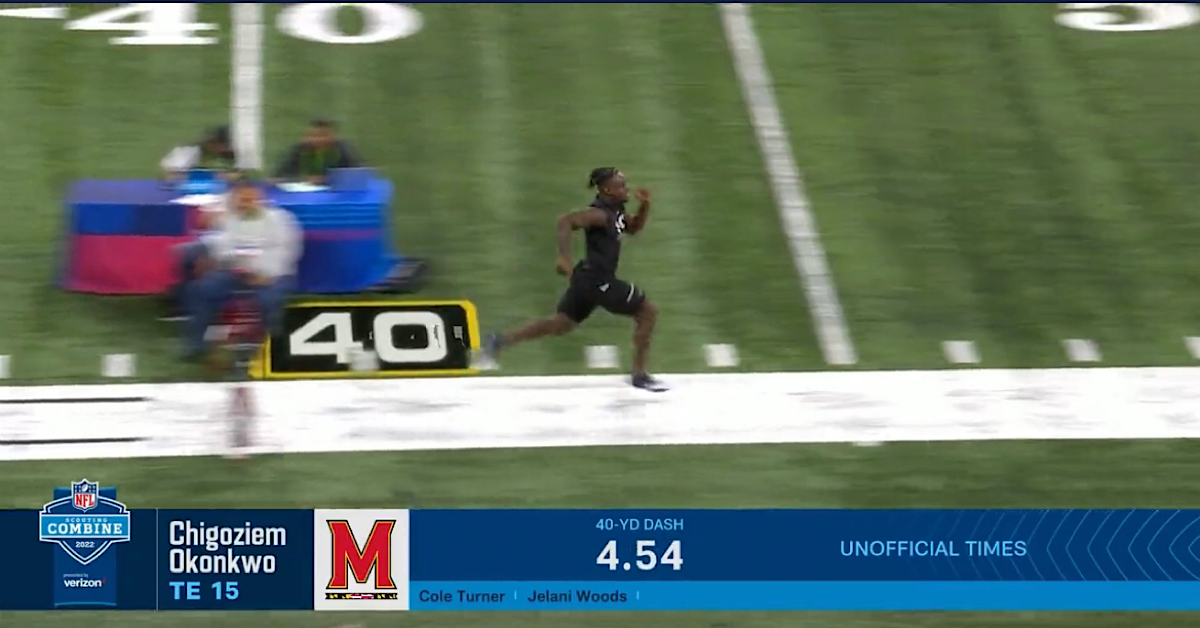 The Matt Nagy years had us obsessing over the tight end position.

Could you blame us?

Trey Burton, Adam Shaheen, Bradley Sowell, Dion Sims, Ben Braunecker, J.P. Holtz, Jesper Horsted, Jimmy Graham, Cole Kmet, Demetrius Harris, and Jesse James were among the many who lined up in hopes of filling what has mostly been a revolving door of disappointment from 2018-21. For what it’s worth, Kmet has shown some growth in his first two seasons in the pros. Perhaps better usage in Year 3 will unlock the potential the previous regime saw in Kmet to make him their first selection in the 2020 NFL Draft. And let’s not forget about Horsted, who is a receiver by trade but became a forgotten man in the offense because Nagy and the prior offensive staff had no idea how to properly deploy their tight ends.

Even still … even more help could be on its way via the upcoming NFL Draft. Perhaps in the form of Maryland tight end prospect Chigoziem Okonkwo, who paid a visit to the Bears:

Ahhhh, yes. The famed hallway of goosebumps that GM Ryan Poles spoke so highly of in March. That walk will give you chills.

And maybe the feeling is similar from the Bears’ perspective when it comes to Okonkwo. After all, this front office must feel something about Okonkwo to use one of its 30 visits on the intriguing tight end prospect from Maryland.

Then again, I’d feel some type of way about a prospect if they r2an the fastest 40-yard dash time for a tight end at the NFL Scouting Combine:

The fastest tight end at the NFL Combine is University of Maryland Terrapin Chigoziem Okonkwo. pic.twitter.com/t7WLWcKj7K

Okonkwo showed out at the Combine in Indy. In addition to running a blazing 40 time (by tight end standards), Okonkwo also put up an eye-opening 35.5-inch vertical jump. But it’s not as if Okonkwo is just a workout champ. The Terrapins’ top tight end put up numbers in his final season in College Park.

Okonkwo is coming off a 2021 season in which he earned honorable mention All-Big Ten honors after putting up career bests in catches (52), receiving yards (447), and touchdowns (5) in 13 games. A top-10 tight end recruit coming out of high school, Okonkwo comes with a unique prospect pedigree to go along with a recent run of success playing in a college football power conference.

At 6-2 1/2 and 238 pounds, Okonkwo might be undersized by traditional tight end standards. That could help explain why CBS has Okonkwo as its TE9, PFF ranks him as TE11, and ESPN lists him as TE17 on the big board.  But his other measurables, timed speed, and the heights he reached with his vertical leap serve as a reminder that it is OK if a prospect doesn’t fit a certain positional box. Can those traits translate to them playing football? If so, consider me interested. Especially if he ends up as a potential value pick on Day 3 of the NFL Draft if he remains on the board.