Rebuilding the "D" From the Back End, Respect Peters, HBD Roquan, and Other Bears Bullets Skip to content 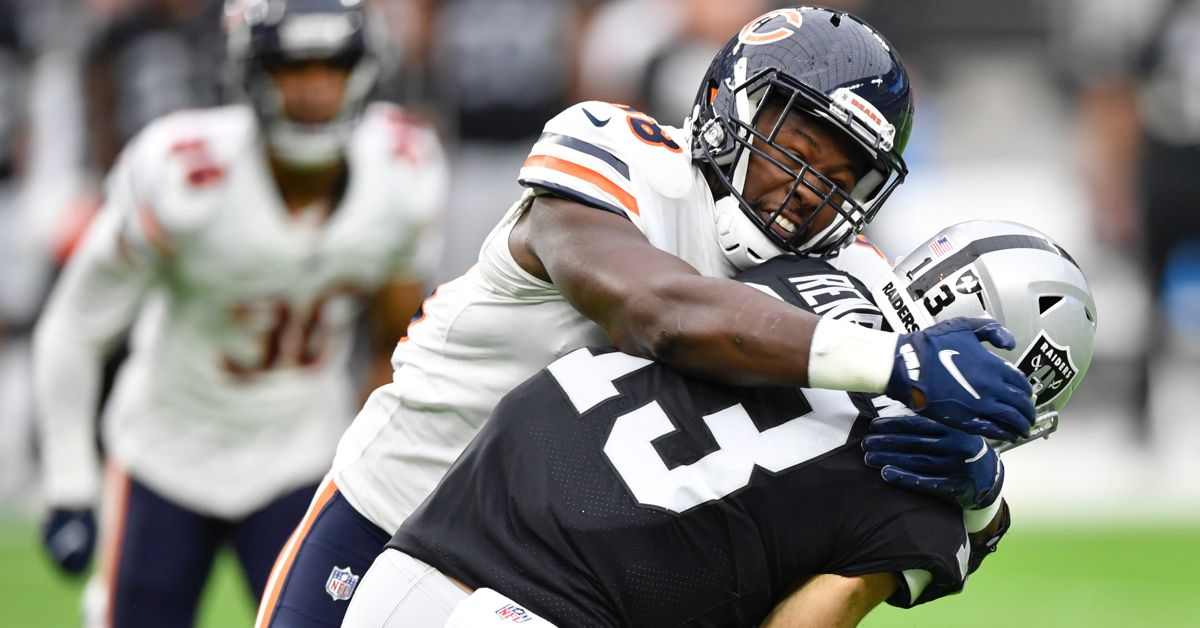 I don’t have great expectations for the 2022 Chicago Cubs, but that won’t stop me from trying to have as much fun as I did yesterday each time I go to the park. Simply put, once you realize that life is a collection of fleeting moments, enjoying the fun ones to their fullest extent is a great use of your energy.

Why can’t every day be Opening Day?

•   While the Cubs were putting in work beating a team from Wisconsin that always proves to be a thorn in my side, the Bears were tinkering with their roster. We went over the reported signings of cornerback Tavon Young and tight end Ryan Griffin (it’s official!) earlier this morning. In case you missed it, you’ll want to run it back with those posts at your convenience. These aren’t the splashiest signings, but they do give us an idea of how the Bears will round out their team with free agents in the days, weeks, and months to follow.

•   Young gives off Bryce Callahan vibes, in that he is a talented slot corner with a high floor and top-tier skills at an important (yet, still somehow underrated) position that has yet to fully reach their potential due to injuries. Ironically, the Bears tried replacing Callahan in 2019 with a more durable player in Buster Skrine, only to have injuries cut his time short with the Bears. Signing Young is a calculated risk, much like re-siging Callahan would’ve been back in 2019. But the one-year “prove it” nature of this deal makes this a potential win-win for both parties if things take some fortuitous bounces.

•   If Young and the Bears catch some good breaks, we could be comparing this signing to the team’s addition of Prince Amukamara in 2017. If you’ll recall, Amukamara came in on a one-year “prove it” deal of his own in Ryan Pace’s attempt to fortify the secondary. Amukamara, like Young, had injury concerns when he came to town. But, when healthy, had enough tape to prove that he could bring it. Amukamara put up a healthy season in 2017, then was able to parlay it into a multi-year deal with the Bears. And at almost the same age, too. Ryan Poles could very well be angling to pull off something like that, especially if Young can make it through another 17-game season.

•   I’m really digging the versatility the new-look Bears secondary has to offer:

•   Having a handful of defenders who can play different spots could be important in building this defense. Sure, it’s gonna look different without Khalil Mack and Akiem Hicks up front. But loading up on versatility on the back end is a nice way to rebuild this defense moving forward. And there is no arguing that Chicago couldn’t use better play in its secondary after seeing how things went in 2021.

•   It will also be helpful that Roquan Smith is back in the thick of it. The Pro Bowl snub is celebrating a birthday today. And that’s reason enough to share a highlight package:

•   Not only did Smith play in all 17 games last year, it took just 16 games for him to set his new career-bests in total tackles. Earning second-team All-Pro recognition was a feather in his cap, but breaking through and getting first-team honors is at the top of the to-do list as Smith enters his fifth year with the Bears. And to think, he’ll be playing in just his age 25 season. Smith is entering his prime and could be to this defense what Darius Leonard was for the Colts while Matt Eberflus was in Indianapolis.

•   Well, dang. NFL Network insider Ian Rapoport reports the Chargers are signing return specialist/receiver DeAndre Carter to a free-agent contract. The Bears, who employed Carter in 2020, hosted DeAndre Carter for a visit recently, and could have been targeting him for a role similar to that of Jakeem Grant. Carter has excellent punt and kick return skills, but could also see time as a gadget player catching passes, taking jet sweeps, and other things of that nature. Because I’m in a mood to find silver linings, part of me wonders if missing out on signing Carter could lead the Bears to pivot and give Dazz Newsome a shot in that role.

•   I don’t think everyone appreciates what Jason Peters did in a pinch last year:

•   Let’s give that number some perspective. Peters’ 77.5 grade from PFF put him at 21st among the 83 tackles who played enough snaps to qualify for the leaderboard. That is solid placement, to say the least. Moreover, tha trade was better than Terron Armstead (75.9) and Orlando Brown Jr. (75.3). Armstead signed a huge deal with the Dolphins, while Brown will play under a Franchise Tag unless he gets a multi-year deal of his own. In other words, Peters was in good company when it came to holding it down at the tackle position.

•   Some notable tackles who remain on the free agent market include Eric Fisher (PFF’s 46th ranked tackle last season) and Riley Reiff (PFF’s OT49). Larry Borom (61.4) was 65th among the 83 tackles, which isn’t all that inspiring. But that’s still not bad for a rookie who was swinging between two positions. Teven Jenkins, who didn’t play enough snaps to qualify, had a 47.5 grade. But I won’t be too hard on him for that, especially since we know the injury issues he overcame just to make it on the field in the first place. The future remains bright for the Bears’ 2021 second-round pick.

•   Marian Hossa, one of my favorite Blackhawks ever, had himself quite a night:

Marian Hossa Was Overwhelmed by the Support of Blackhawks Fans on His Big Nighthttps://t.co/Zb5kboVvH1 pic.twitter.com/OOSrc4QEAn

•   And some key Bears were there to soak it all in:

Justin Fields and the Chicago Bears are in the house. #Blackhawks pic.twitter.com/iwgB8m27cm

Justin Fields gets booed for coming up empty during the shoot the puck contest. Chicago, you’re a tough crowd. pic.twitter.com/LnuyZvKjsd

•   They weren’t booing, they were chanting “Stick to fooooootball!” because it’s clear that shooting hockey pucks isn’t in Justin Fields’ bag.

•   As a reminder, this is what Fields can do in a more familiar setting:

•   Despite their recent struggles, the United Center’s *OTHER* tenants have stepped their game up over the last year:

With Playoffs Clinched, the Bulls Organization Has Taken a Massive Step Forwardhttps://t.co/V1BCFaHO6Z pic.twitter.com/OMbttfTeGJ

•   Yesterday was an absolute treat:

Oh, Yeah: Kyle Hendricks Had It All Workin’ on Opening Day – https://t.co/THBprQ26Yq pic.twitter.com/FZ4h3nFUp6