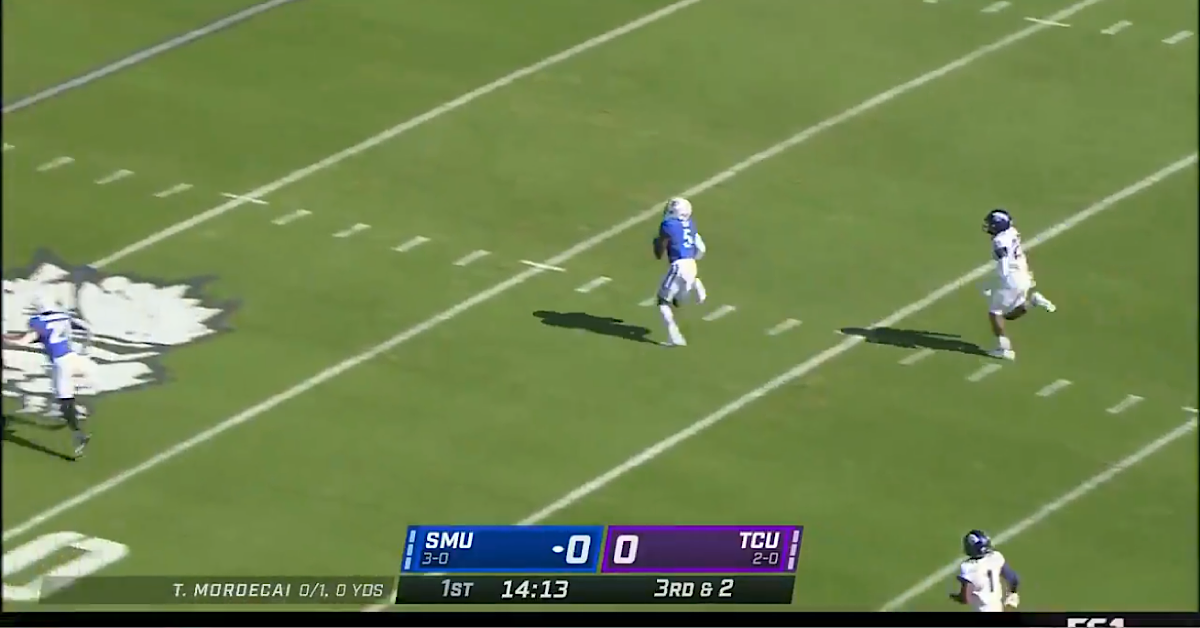 When Ryan Poles joined the Bears, he underscored the goal of building a team with “young, fast, and physical” football players. And while it feels like every GM says that at one point or another, that has been a notable theme among the receivers who’ve enjoyed pre-draft meetings with the Bears.

SMU’s Danny Gray is only the latest:

The Bears reportedly had a virtual meeting with wide receiver Danny Gray, his second with Chicago. And that’s an eye-opener for me.

As Melo notes, Gray is coming off a strong season for the SMU Mustangs during which he put up 803 yards and 8 touchdowns to go along with his 49 catches. If those numbers and a 16.4 yards per reception average aren’t catching your eye, then running a 4.33 40-yard dash at the NFL Scouting Combine certainly will. And when you put all of those things together and couple it with the Bears’ need at the position, then the idea of drafting Gray should be all the more enticing.

But, if that doesn’t do it, then perhaps this favorable comparison from The Athletic’s Dane Brugler might:

If there is a Darnell Mooney in this draft (day 3 speedster who will outplay draft spot), #SMU WR Danny Gray is who I'm looking at.

The Bears landed an absolute steal in 2020 when they were got Darnell Mooney in the fifth round. And while I’ll never expect lightning to strike twice, Gray’s skills, traits, and blazing open-field speed are the types of things Chicago’s scouts should be trying to identify in their attempts to unearth a late-round gem. Because there are staffers who are holdovers from the old regime who were around when the Bears picked Mooney, maybe they can get together and find another one.

These clips sure are dazzling:

Danny Gray hauls in the pass and keeps his feet inbounds for the @SMU_Football TD. pic.twitter.com/lvkOihTCEm

.@SMU_Football showing off their horse power early on as Danny Gray takes it 62-yards to the house. #AmericanPow6r | @CBSSportsNet pic.twitter.com/VnurgucwMX

#Mustangs WR Danny Gray (#5) shows off his hand-to-eye coordination on this busted play.

He miraculously catches this tipped pass and turns on the jets for a big SMU TD! pic.twitter.com/yREwVYLPp5

The NFL is looking for explosive playmakers and @SMU_Football WR Danny Gray is getting scouts’ attention with plays like this. @DGray_5 has that extra gear to bust angles and score from anywhere on the field. 🚀 #TheDraftStartsInMOBILE™️#BestoftheBest https://t.co/XtL1XUxXg1 pic.twitter.com/IQ0QEFBinK

Gray doesn’t check in among the top-20 receiver prospects at CBS Sports, ESPN, or Pro Football Focus. But to me, this signifies the type of late-round value Gray could be if he remains on the board when Day 3 of the NFL Draft kicks off. And with the Bears having put in two visits with Gray, his name is worth keeping in your memory banks for draft weekend.