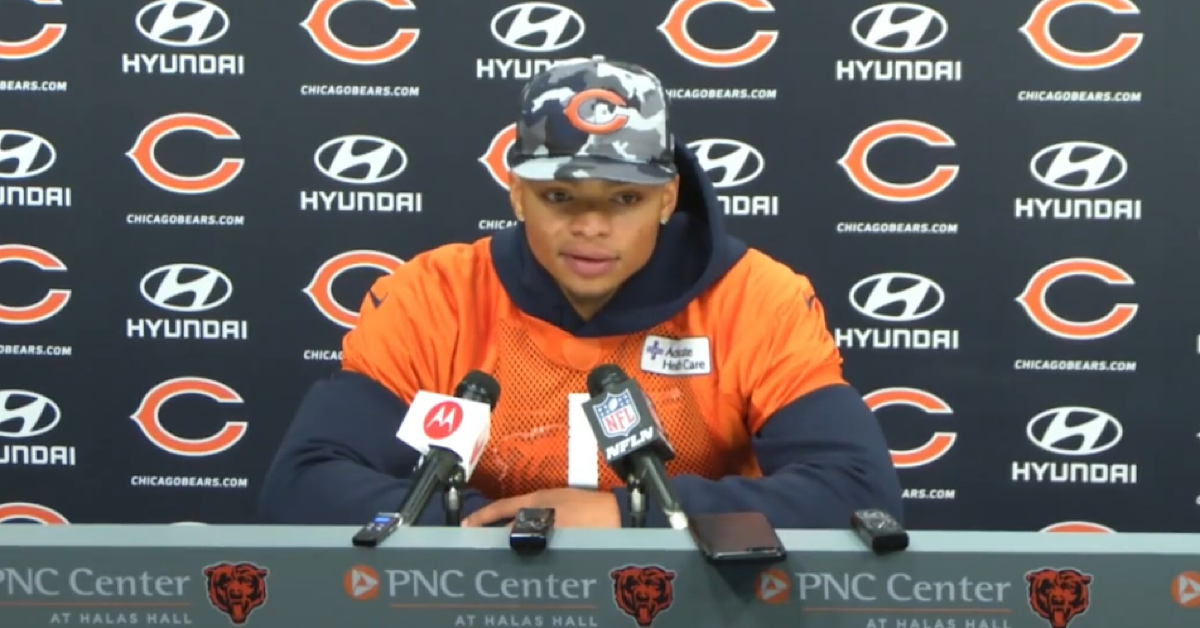 So much has changed around Justin Fields since he last took a snap in a NFL game.

The Bears have a new general manager, Ryan Poles, who hired a new head coach, Matt Eberflus. And together, they’ve put together a new coaching staff, which features a new lead play-caller, Luke Getsy, as well as a slew of other fresh faces among the positional coaches. And to think, more new guys will be jumping on board next week when the NFL Draft opens its doors.

Fields weighed in on a bunch of topics during his press availability at the start of voluntary minicamps going on at Halas Hall. We’ve plucked some highlights and added some commentary for depth and context. Enjoy!

Of Course Fields Has Eyes on the Draft-Eligible WR Prospects

When asked if he had eyes on receiver prospects in this upcoming draft, Fields said that he did. Not surprising, but notable.

#Bears QB Justin Fields on Chris Olave: "He's probably one of the best deep-ball trackers I've ever played with in my life."

If it was up to me, I’d be finding a way for the Bears to put Olave and Fields together again. Alas. It’s not. And many other teams pick before the Bears. Anyway, of course Fields has eyes on draft-eligible targets. He’s only human. And there is nothing wrong with doing some scouting on possible future teammates. Maybe he even has a suggestion on whom he likes after watching tape. Surely, his general manager is covering all the bases here. But a little extra help never hurt anyone.

As for things Fields can control, he made a noteworthy mention of a change in his mechanics:

It might seem like a small tweak, but it is heady to get as many reps as possible to get the muscle memory to a place where it becomes natural. Timing is everything, both in life *AND* quarterbacking.

A tip of the cap to new Offensive Coordinator Luke Getsy, who is doing the obvious thing out of the gate:

Gosh! The bar is on the floor after the Nagy-Pace era. It won’t be there for long, but … ugh. Those two did a number on us the last few years.

To be clear, I’m not preparing to throw a parade for Getsy doing this small thing. Heck, I’m not even thinking about getting the balloons and streamers from the closet. It’s too early for that stuff. HOWEVA, after watching Matt Nagy and Bill Lazor decline to run an offense that best suits their players, it is refreshing to hear that Getsy’s offense will tailor plays to Fields’ skill set. We shouldn’t take this stuff for granted, folks. After all, we know what it looks like when teams don’t do the bare minimum. And it ain’t pretty.

•   Sometimes, a non-answer tells you everything you need to know:

Justin Fields was asked if he was put in the best position to succeed last year.

•   Fields confirmed he was working out with Cole Kmet and Darnell Mooney recently in Atlanta. As it stands right now, things are lining up for Mooney and Kmet to be Fields’ primary targets. Hence, the importance of these off-campus workouts featuring these three amigos. We saw a bit of what Fields and Mooney could do in spots last year, but it sure would be nice if Kmet could make a similar leap in 2022.

•   Speaking of workouts, Fields also weighed in on his time working out with Colin Kaepernick. The free agent quarterback who remains on the comeback trail looked good, according to Fields. Kaepernick recently said he is willing to be a backup quarterback if a NFL team gives him a shot. I almost wish he would have been more vocal with this stance sooner, as it would have been easy for me to make a pitch for Kaepernick to be a QB2 behind Fields. Both are strong-armed quarterbacks with mobility that makes things tough on defenses. At minimum, Kaepernick could share secrets on what it’s like to beat the Packers.

•   Some words from Fields on his new general manager and head coach:

Justin Fields said he's maintained a dialogue with Ryan Poles during the course of this first offseason working together: "As time goes along, our relationship will naturally grow and naturally get stronger."

Justin Fields talked about building his relationship with Matt Eberflus and getting to know him as a person. Said Eberflus sits in on offensive meetings a lot and that "he loves this game and he really wants us to be great. He has a plan and we're going to follow after his lead."

•   I’m digging that Eberflus, a defensive-leaning head coach, is in on offensive meetings. Surely, there is much that Fields can learn from the perspective Eberflus brings to the table. After all, Fields said as much himself earlier in the offseason.

•   This is essentially what I say to myself when I try to start eating right after big holiday meals:

•   For more from Fields, you can watch the entirety of his press conference below: