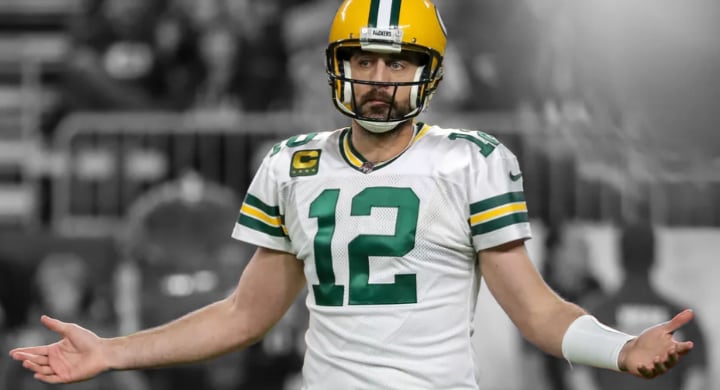 When Aaron Rodgers signed his mega-deal to return to the Packers, there was a grand assumption that Green Bay would run it back with the team that won enough to earn the NFC’s top overall seed.

But you know what happens when you assume.

As it turns out, those assumptions haven’t come close to being accurate.

It began with the surprising Davante Adams trade. In some circles, it was pushed as a mutual parting of two sides who had gotten to the end of the line. But it sure doesn’t sound like Rodgers saw it that way:

"When I made my decision I was thinking Davante would be back but I have so much love for him & I wish him the best" ~@AaronRodgers12#PMSSeatGeekSpectacular125k pic.twitter.com/WuoNnPvnMP

Aaron Rodgers on losing Davante Adams: "I thought based on the number we offered Davante and being able to play with me for a few more years would definitely make a difference, but in the end he was ready to move on."

*play with me for a few more years* seems noteworthy

Conventional thinking that followed was essentially that while they had to part ways with an All-Pro receiver, netting a first-round pick in the deal would go a long way toward finding Adams’ replacement. After all, it was reportedly a draft class full of stud pass-catchers. And seeing that the league has been infiltrated by rookie receivers who make immediate impacts, things were lining up for the Packers to do right by Rodgers and draft a first-round receiver for the first time in a long time.

Heck, it sounds like Rodgers even had a preferred choice:

"The word I got was that Treylon Burks was the guy Aaron Rodgers wanted & he went early to Tennessee" ~@RapSheet#PMSLive pic.twitter.com/hTGOGYJe9H

And then the first round of the 2022 NFL Draft happened.

Six receivers went off the board with the first 19 picks. Trade-ups were happening so general managers could land their preferred prospects. Heck, we even saw two established receivers get dealt to new teams. Certainly, the Pack were bound to strike back. Right?

Well, not so much.

Mel Kiper Jr., the long-time ESPN draft guru, was downright befuddled by the Packers’ draft-night choices as they took two *DEFENSIVE* players with their first-round selections.

•   On picking LB Quay Walker: If you watch the Georgia film closely, you’d really struggle to understand why Walker was drafted before his teammate Nakobe Dean. … He has some talent, but I didn’t see him put it all together in college. I have Walker at No. 43 overall on my Big Board, so this was a reach.

•   On selecting DL Devonte Wyatt over a WR: Wyatt is a nice player, but Green Bay passed up North Dakota State wide receiver Christian Watson, which must mean the franchise thinks it can upgrade with a veteran for Aaron Rodgers to target. I thought Watson would have been a great fit.

Strong words from the longest-running draftnik, to be sure. But not as harsh as this headline:

The Green Bay Packers Failed Miserably On Day One Of The NFL Draft https://t.co/HIb2S7JTQ9 pic.twitter.com/omnNiwJe6d

Green Bay really ended up with two first-round picks, two defensive players, and an “A” grade from Reuter in the same write-up in which he gave the Bears an “A” for their efforts (seriously). And the Packers were STILL dragged for not giving Aaron Rodgers what he wants. Tough break.

Burks went a few picks before the Packers could go on the clock, with the Eagles scooping up the Arkansas receiver with the 18th pick. Green Bay didn’t go on the clock until No. 22, and while no other receivers were taken after Burks, that the team continues to not take first-round receivers is one of the NFL’s longest-running comedic bits. The Packers are about to lean heavily on Rodgers being other worldly (again). Why not? I mean, he is coming off consecutive MVP awards. And while we’ve seen him beat the odds before, there are only so many times this football villain can slip away without punishment. Right? RIGHT!?