"Toughh" to Watch WRs Go, Day 2 Optimism, How to Fill the Gaps, Packers Fail? And Other Bears Bullets Skip to content 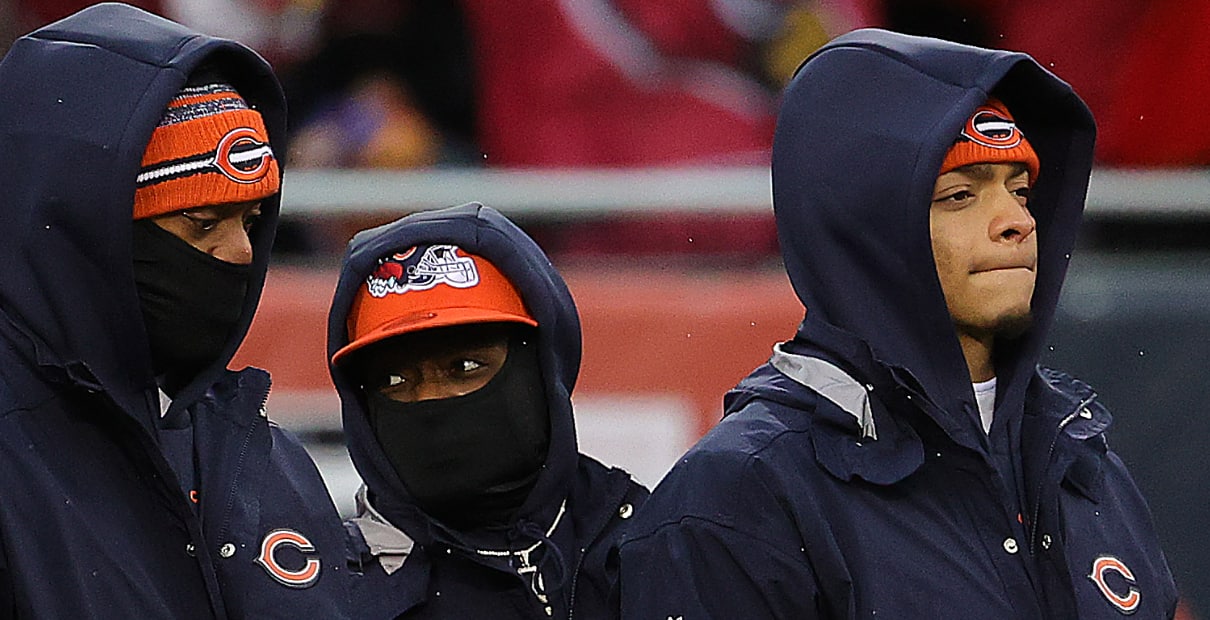 When you see an artist’s live show multiple times and they are great each time (and for different reasons!), that is when you know you are in the presence of a great one. John Mayer slayed at United Center on Thursday night. Just as he did last time I saw him in 2019. And the time before that in 2017.

Shout out to Patrick for holding down the fort while I was gone. If you’re not already following him on Twitter, you should change that ASAP.

•   In that moment, Justin Fields was all of us. Although, his usage of “toughh” and ours was a bit different. Because  “toughh” is how I’d describe last night coming back from the show seeing six wide receivers go in the first round. And then playing catchup and seeing two stud receivers get sent to new teams in trades.

•   No one saw these deals coming:

Trade! The Ravens have traded WR Marquise Brown to the Cardinals!

•   Quarterback reactions after these trades were as you would expect:

•   …But the cost of doing business in an extension lost to the value of trading a player for future value in a draft pick. It’s a risky endeavor, but one the Titans front office was willing to make. Albeit one that didn’t seem to go over well with the coach:

This was Mike Vrabel’s reaction to the AJ Brown trade 💀 pic.twitter.com/CYOOwcdcJt

•   To this point we’ve seen A.J. Brown, Marquise “Hollywood” Brown, Amari Cooper, Davante Adams, and Tyreek Hill change teams via trade. We’ve also witnessed Chris Godwin, Mike Williams, and Michael Gallup stay put. On top of that, the likes of JuJu Smith-Schuster, Christian Kirk, D.J. Chark, Marquez Valdes-Scantling, Russell Gage, and Cedrick Wilson Jr. leave their former teams for greener pastures in free agency. Throw in the six receivers who went off the board in Round 1 on Thursday, and suddenly an offseason that went from “you can get receiver help in so many different ways turned into “you better hope there is help available on the second or third days of the draft.” WHO COULD’VE PREDICTED THIS!?

This has long been my fear after watching the Bears miss out on every worthwhile free agent and trade option. And if you’ve been reading this space since free agency in March, I’ve been warning about the reality that played out last night going on two months. Teams creating WR needs to be filled on draft weekend because of their trades and only one quarterback going on Thursday has put any Bears plans to snag a first-round value in Round 2 to bed.

•   It has been a truly frustrating offseason for the Bears to this point. It’s not just last night’s run on receivers or offensive linemen that is bugging me. Instead, it is that the team’s two biggest needs went mostly ignored by the front office. Whether it was a misread of the markets or by designed, it simply doesn’t look good — let alone fun or entertaining. Depending on how the rest of this draft shakes out for the Bears, this is going to be a tough sell for this new regime. Because the optics make it seem like the Bears are angling to tank to rebuild this thing from the top of next year’s draft while simultaneously hoping Fields becomes great. I realize the NFL Draft is in Vegas this year, but this is a wild gamble on the new administration’s part.

•   As of now, their offensive changes amount to (1) changing the offensive play caller (hi, Luke Getsy) and playbook, (2) signing a stop-gap interior lineman (sup, Lucas Patrick) on a modest two-year deal that might as well be a one-year pact with a buyout option after this season, (3) flipping Larry Borom to left tackle and Teven Jenkins to the right side, (4) taking a flier on an ex-Packers receiver familiar with the new system (I’ll admit, it’s cool typing out Equanimeous St. Brown’s name), and (4) signing a receiver (who was recently arrested for reckless driving). Tack on losing out on free agent offensive lineman Ryan Bates because the Bills were able to match the Bears’ offer sheet, and this offseason was as successful as a Hail Mary wave at the bar while Semisonic’s “Closing Time” plays on the speakers as the lights go on.

Just completed a quick Unit Grade sweep. Here is a look at each NFL team's roster strength through Round 1 of the draft: pic.twitter.com/1NrsE4NQR0

•   As Bears fans, we like blue. It’s in our blood. But that’s wayyy too much blue for this team on the chart.

The Green Bay Packers Failed Miserably On Day One Of The NFL Draft https://t.co/HIb2S7JTQ9 pic.twitter.com/omnNiwJe6d

•   Even if the Packers didn’t address their receiver needs, they still landed a pair of first-round talents with their picks. So “failing miserably” feels a bit out of touch with what went down. Even still … judging by the current compositions of the Bears and Packers rosters, Green Bay-Chicago battles this Fall will be kin to rock fights. Nothing like watching the Packers beef up their D-line and linebackers group to counter the Bears always powerful ground game.

•   Uhh … are the Lions a quarterback away from being dangerous?

•   If you didn’t fully understand why Ryan Pace was operating the way he did while in Chicago, the organization he began his career with made some very Pace-y moves:

•   Give credit where it’s due. As Jason Lieser (Sun-Times) points out, the Bears did well in standing pat and not desperately trading into the first round. It was quite likely that a trade-up would’ve done more harm than good to the franchise’s grand plan. But beware, there is a fine line separating patience and inactivity. Proceed cautiously, gang.

•   Over at Da Bears Blog, Johnathan Wood uses trends over the years in an attempt to explore what the Bears’ draft approach will be this year. If we let the trends be our guide, the second round could be where the Bears can hit bullseye at wide receiver and at cornerback. This team could use starters at both. And, traditionally, a top-50 pick is a place where that help can be found. The Bears have *TWO* top-50 picks. This is where we win.

•   What are the odds that the two Patriots users of the 783,000 who did PFF mock drafts were Bill Belichick and his dog:

Two Patriots users picked Cole Strange in the first round of the @PFF mock draft simulator.

Patriots fans had a total of 783k mock drafts.

•   How can you not be romantic about baseball?

•   The Blackhawks poaching the Cubs front office for a new Associate GM hire: