Taking Swings on Saturday, Grade With an Emoji, and Other Bears Bullets Skip to content 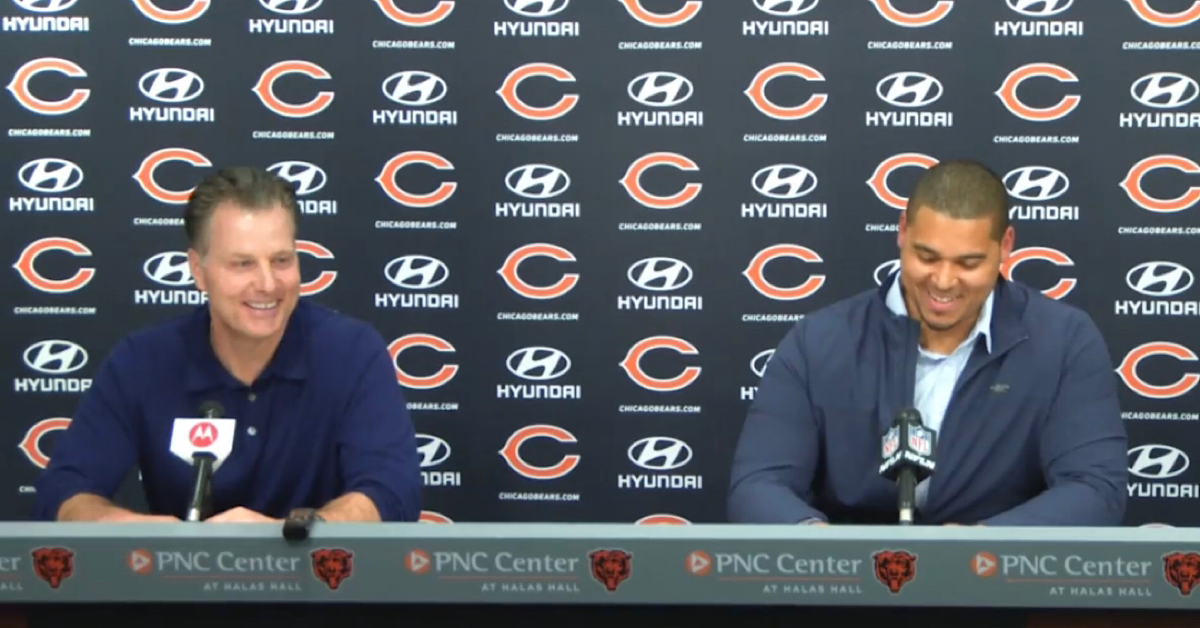 •   The 2022 NFL Draft is over, Chicago’s football team has made all its picks, I’ve gotten a full(ish) night of sleep, and the first thing I want to know is:

•   I’m curious to see how the results of this poll shake out. Things would’ve looked different had I asked Friday, I’m sure. The vibes weren’t great after GM Ryan Poles (1) was unable to trade down and add picks like he said he wanted and (2) drafted a pair of defensive backs with top-50 picks in what was a class supposedly loaded with offensive line and wide receiver talent. But when Poles was wheeling-and-dealing his way to 8 picks on Day 3, then using 4 of those selections on offensive linemen, I felt the a shift in the conversation about how things were going.

•   Don’t get me wrong. The Bears didn’t check every box on the needs list with this draft class. But Poles’ ability to turn a weekend that began with Chicago having just 6 picks and ending up with 11 (including eight on the lat day) was impressive. If that’s what the future holds for the Bears, then I’m excited to see future draft classes with 10+ picks. The more swings you take, the better the chances you’ll get a hit. It’s that simple, even if making the picks isn’t that easy.

•   From 2015-2021, Ryan Pace drafted eight offensive lineman. On Saturday afternoon, Ryan Poles drafted four. That puts some things in perspective in terms of organizational philosophy moving forward. But it also does this: When Poles said there was depth in the later rounds when it came to offensive linemen before the draft, it was easy to brush it off as GM-speak because that’s what we’ve grown accustomed to over the years. Instead, Poles ended up acting upon it by drafting four late-round linemen. Is this what transparency is?

•   Poles didn’t draft a bunch of household names when picking big boys in the trenches, but I’m really into the type of offensive linemen he brought into the mix. For example, Ja’Tyre Carter is an intriguing fit and potential project for new OL Coach Chris Morgan to get his hands on. This thread from Jacob Infante does a solid job using clips to explain why we should be into him:

Carter is a four-year starter at left tackle, but I project him best as a guard.

Carter has mitts for hands, as his power in his upper body is commendable on tape.

He blocks well on the move and does a good job of latching onto opposing defenders. #Bears pic.twitter.com/J2GqubMNaZ

•   Maybe Carter’s best fit moving forward is at guard. But a four-year starter at left tackle, who was dominant at his level of competition, and has an athletic background as a high school basketball standout in Louisiana makes for an intriguing profile. There is a lot to work with here.

•   The other offensive linemen are intriguing fits for a new-look offense, too. Braxton Jones (6-5, 310 pounds, 35-3/8″ arms) has the traditional profile of a starting caliber left tackle. He’ll need to clean up some technique issues and play with some consistency before he makes it to that place. However, his frame plus athletic profile could make him a proficient swing tackle. Zachary Taylor, yet another linemen chosen by the Bears on Saturday, has starting experience at both tackle spots and at guard. We shouldn’t be taking this potential versatility for granted. If Luke Getsy’s offense is to be similar to that of the Packers, then it’s worth pointing out how players like Billy Turner and Lucas Patrick were starters at multiple positions in Green Bay. Clearly, those types of players have added value in this scheme.

•   It’ll be interesting to see how things work out for Doug Kramer. The fourth offensive lineman of the bunch is a center by trade and figures to be one at the NFL level. Can he do enough in rookie minicamps to position himself as someone who can fight for a starting job and move Lucas Patrick off center to right guard? Or does Kramer try to pick up extra reps as a guard at some point down the line to increase his versatility and potential value? There are questions to answer, but I’m glad we’ll have normal offseason training programs to get these players up to speed so they can be firing away when training camp opens this summer.

•   Did you ever play the EA Sports College Football video game? If you did, and you’re reading this, there is a real chance you were like me and into recruiting ATH prospects and putting athletic freaks at key positions and developing them over five years. Anyway, that’s what Miami (Ohio) edge defender Dominique Robinson’s profile feels like to me. The classic ATH with tools, but a need for a toolbox. Perhaps pro coaching can get him to another level. Robinson’s path will be an entertaining one worth watching.

•   It looks like the Bears got themselves a menace with Trestan Ebner, who looks like a handful to bring down when he gets the ball in space:

•   The short game wasn’t a real strength for QB Justin Fields during his rookie season. But if he can make the right tweaks and allow himself to get the ball out quickly into the hands of playmakers, letting them do a bunch of the dirty work (instead of relying on an offensive line loaded with question-marks to hold blocks for an extended period of time) could prove to be beneficial for his development.

I liked how Bears GM Ryan Poles handled Day 3 of the draft. He understood the importance of taking as many swings as he can with this rookie class by turning three picks into eight. He focused on a position group of need (O-line) and relied on players with strong athletic traits.

After nine of their 11 picks this weekend, the Bears brought a scout down to brief the media on the player and the process. Definitely a very helpful touch in the path to learning more about so many guys we knew little about just 72 hours ago.

•   The Broncos GM took it to another level when it came to giving his scouts some love and exposure:

•   Household cleaners, razors, Old Spice, bath bombs – all kinds of stuff you would use in your house – are Deals of the Day at Amazon today, so check that out. #ad

.@Schuster_Elias of @BN_Bulls joined #WGNNewsNow Sports Talk to discuss the end of the Bulls' season and what might be ahead this offseason. See his full interview on the team from @WGNNews here: https://t.co/PXABFhRpNT pic.twitter.com/CQ0XU6ZygG

•   Housecleaning for the UC’s other tenants is underway:

•   The Cubs are trying to avoid being swept out of Milwaukee: