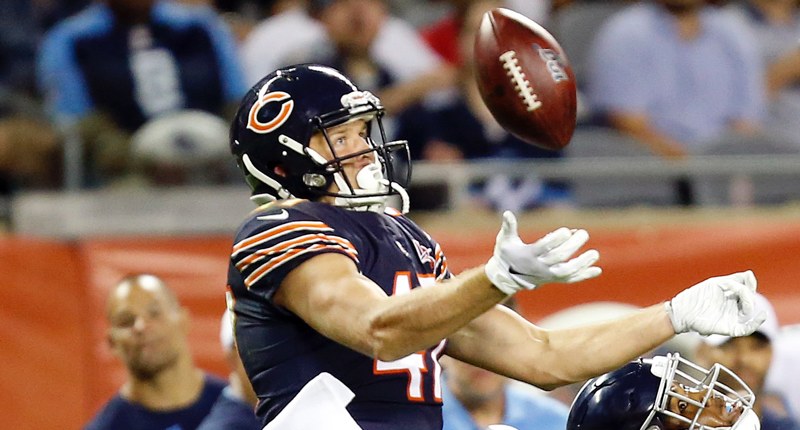 After spending time looking at the NFL schedule, I realize the Bears-Packers game in Green Bay is the same weekend SIU (my alma mater) plays Northwestern in Evanston. I’ve gotta make sure my tailgating equipment is fully operational for that weekend. It should be a treat.

•   The last few days have been quite a ride for Jesper Horsted:

⇒   Re-joins the team after clearing waivers, goes to the reserve/physically unable to perform list

⇒   Gets waived with an injury settlement

Going on waivers with an injury settlement likely spells the end of Horsted’s career in Chicago. He played in just 13 games and made just 10 catches, but three of them went for touchdowns. One of which you might fondly remember:

Years from now, when you’re asked at trivia night who caught Justin Fields’ first touchdown pass, you’ll know it was Jesper Horsted. And because you’ll get the answer right because you read this post, you’ll think of this post fondly.

•   Here’s what is left of the tight ends room: Cole Kmet, James O’Shaughnessy, Ryan Griffin, Chase Allen, Rysen John, Jake Tonges. Not quite the Murderer’s Row of options at the position. Although, I’m still holding out hope for Kmet taking another step forward toward being a serviceable “Y” tight end contributor.

•   While the Bears lose one pass-catcher, the Saints reel in another with Jarvis Landry set to return back to his Louisiana roots:

Jarvis Landry confirms he is signing with the Saints. https://t.co/AN5IqG1T0w

•   Jarvis Landry. Michael Thomas. Chris Olave. Alvin Kamara. Sheesh. What a collection of offensive talent they’ve been able to assemble in New Orleans. Must be nice.

•   It is a bit disheartening to see the Saints collect an embarrassment of riches while the Bears receivers room still needs obvious work. But was Landry ever a fit for Chicago? The LSU product returns home, following fellow LSU star Tyrann Mathieu in signing a free agent contract with New Orleans. It just makes sense. And then, when I consider where the Bears are (based on the moves they’ve made this offseason) and where the Saints think they will be (contending for a playoff spot) this year there is no questioning why the the Saints-Landry link up went down.

•   Never too early to dream on receiver prospects (especially in a loaded class):

If #Bears fans want size at WR, they’d be wise to remember Wake Forest’s AT Perry in the 2023 draft.

6-5 weapon with good deep speed and fantastic 50/50 ball ability. I think he skyrockets up draft boards sooner rather than later. pic.twitter.com/V2M5HIbFIr

•   Even still … I like the competition the Bears will have at the position during training camp and the preseason. We’ve seen post-hype sleepers make the most of these types of opportunities. And the Bears have a handful of players who fit that bill on their roster. It could be problematic if everyone in the receivers room flops, but we can cross that bridge if we get to it. And I imagine that if things are trending in that direction early enough, GM Ryan Poles will have eyes on improving the group on the fringes.

•   Read this, take a breath, and enjoy the weekend:

I'm going to say it as often as I can, even at the risk of sounding like a broken record.

Justin Fields is happy. The organization is happy. There is no panic from anyone in the building re: the young QB's 2022 production. This is a process, and they ALL understand that.

•   If Justin Fields is happy, I’m happy. And what’s there to be mad about in mid-May anyway?

•   Remembering some dudes who spent a brief time in Chicago:

With Jesper Horsted's #Bears career now seemingly over, I ask, who is the most popular Chicago Bears receiver in franchise history with 10 or less career catches?

•   If you’re looking for a mini, portable grill for your warm weather needs, there’s one 40% off at Amazon today. #ad

•   Watch your back, Daniel Jones:

When your GM used to be a college QB (for a minute). Yes, that is Joe Schoen throwing passes at #Giants rookie mini camp. pic.twitter.com/UXJUrKEKnL

Prime @frankgore on the @49ers was a problem.

•   At least the MiLB Cubs are stacking dubs:

•   I sure hope the answer to this question is a resounding “yes” for a great number of reasons:

Can Nikola Vucevic Find His 3-Point Shooting Stroke Before Next Season?https://t.co/ZGAVWgOkWU pic.twitter.com/8kqHYB8rTN