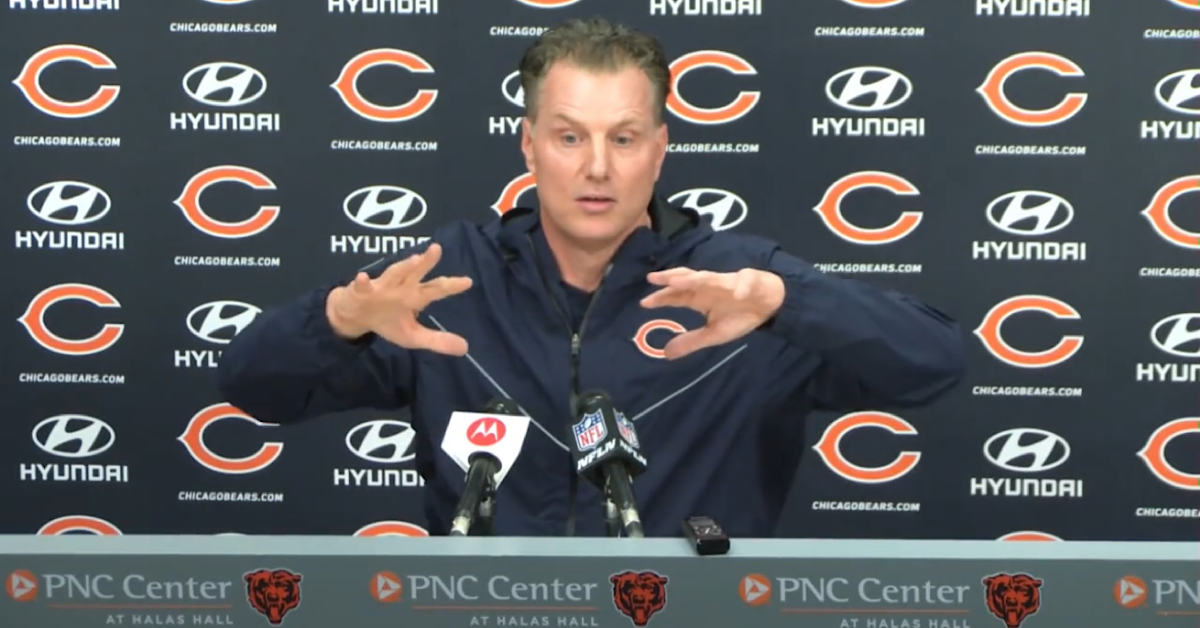 Getting four Game 7s over the weekend was a treat. Do I wish the Bulls or Blackhawks were involved in some way? Absolutely. But being a neutral and watching four elimination games is so much healthier for the heart, soul, and blood pressure.

•   If first-year Bears Head Coach Matt Eberflus wants to play the underdog card this season, he’ll be able to do so coming out of the gates. While thumbing around on DraftKings’ sports book app, I noticed the site already has way-too-early Week 1 lines. Chicago’s football team is a 6.5-point underdog *at home* against the 49ers. And the 42.5 point total is tied for the lowest of Week 1’s games. If you were curious about how the general public feels about the Bears, I feel as if being a 6.5 point home dog in a low-scoring game tells us everything we need to know.

•   Will it make you feel better if I underscore how the Bears aren’t alone in being home underdogs in Week 1? David Purdum (ESPN) shares that opening week will feature a record number of home teams who won’t be favorites. The Texans, Jets, Falcons, Panthers, Lions, Cardinals, Vikings, Cowboys, and Seahawks are all home underdogs in their respective lid-lifters. That first set of games can be unpredictable. I wonder if any of these lines will change between now and when games kick off in four months.

•   It probably isn’t much consolation, but it looks like Eberflus could be using several variations of any underdog rah-rah speeches he has up his sleeve this year:

Yes, #DaBears have one of the easiest schedules – 4th easiest going by win totals.

Yes, the Bears are favorites only TWICE.

•   We can also put this in the perspective of someone who isn’t wagering on the games. The Bears have seven games against six teams who made the playoffs last year. In addition to playing the Packers twice, the Bears get home games against the Niners, Eagles, and Bills, as well as road shows against the Patriots and Cowboys. Chicago also has games against Miami (had a winning record last year) and Washington (just one season removed from making the playoffs). There is some stiff competition ahead for the Bears. Ideally, the clean slates in Chicago will help lead a more consistent and competitive effort.

•   A nugget from Chris Emma (670 The Score), who notes that the Bears’ Week 14 bye week comes as late as it possibly can under the NFL rules. I’m not sure if this is a bad beat. On the other hand, we’re looking at a team playing 13 consecutive games from jump street with no breaks. A new regime might prefer an earlier bye to correct some things that aren’t going as per the plan. But on the other hand, maybe this can be a blessing in disguise. Perhaps playing through whatever growing pains will do wonders toward testing the Bears’ mettle.

•   On the bright side of all this scheduling mess is this fun factoid: The Bears don’t play a road game in December and are on the road just once during the final six weeks of the regular season. December could be more interesting than we might otherwise expect.

•   In addition to that Week 1 showdown against the 49ers giving us a Justin Fields-Trey Lance meeting, it might also be the first of three games pitting first-round QBs from the 2021 NFL Draft against each other. Chicago also gets Mac Jones (Week 7) and Zach Wilson (Week 12).

•   One player probably relishing the heck out of all of this is James O’Shaughnessy. The Naperville North and Illinois Stat product will play for his hometown team. “It’s a sentence you write in a children’s book,” O’Shaughnessy told the Tribune. Between a homecoming for the tight end and his ties to new Bears GM Ryan Poles (who was in Kansas City’s front office when they drafted O’Shaughnessey in 2015), there were ample ties pulling him back to Chicago. And I imagine a path to playing time (which grew even more clear with Jesper Horsted’s departure) helps matters.

•   New Orleans got themselves a hometown discount with Jarvis Landry:

The #Saints gave WR Jarvis Landry a 1-year deal with a base value of $3M, source said. He can earn another $3M in incentives, mostly based on individual stats. A good value option for New Orleans, while Landry gets his 1-year deal that allows him to get paid again if he produces.

•   Landry signing this deal with the Bears would’ve had me over the moon. But Chicago isn’t New Orleans. So, this wasn’t going to be available for the Bears. Landry’s deal with the Saints is essentially a pillow contract. It is a soft landing for Landry to re-establish himself before hitting free agency again next year. If Landry can turn back the clock and perform as he once did, he’ll get PAID next offseason. And, hey, the Bears could still be in the market for a receiver (or two … or three?) by the time next March rolls around.

Dennis Allen on Brees: “I think the comment was made in jest”

•   It would be a hoot if Brees came back to football … in a playing capacity … for the Fan Controlled Football League. Don’t laugh. That upstart organization features pro football Hall of Famer Terrell Owens and Heisman Trophy winner Johnny Manziel. Brees slinging it for funsies in that league wouldn’t surprise me (mostly because football is teaching me not to be surprised by anything any more).

•   If you’re looking for a deal on a soundbar, Amazon’s got one in its Deals of the Day. #ad

•   I’ll admit it — it was pretty cool to see the Albert Pujols St. Louis homecoming feature a relief appearance on Sunday Night Baseball.