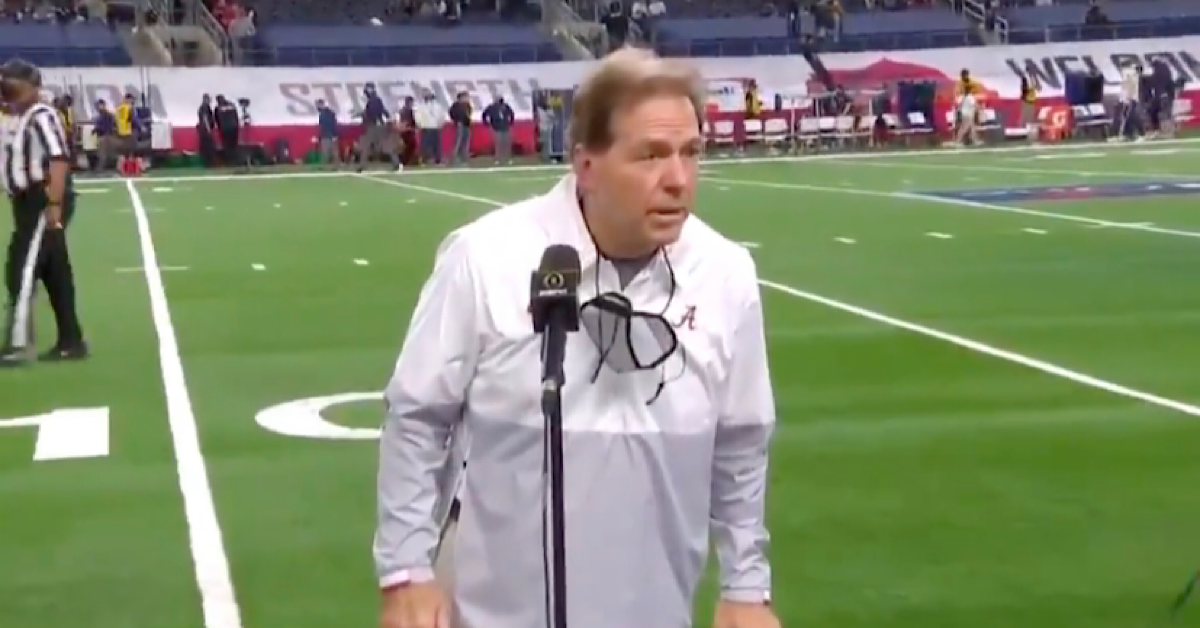 In an ideal world, the NIL movement — which allows college student-athlete to make money for the use of their name, image, and likeness — would level the playing field from a recruiting standpoint and help the players who generate revenue by way of their performances to net some cash.

And to this point, it has done that. But on top of that, it is spicing up the college football offseason. Because without NILs, we wouldn’t have a handful of high-profile college football coaches huffing and puffing in mid-May.

Alabama Head Coach Nick Saban and his Texas A&M counterpart Jimbo Fisher are going after each other in a pretty heated way. And the root of it all is in the NIL model, which Saban thinks Fisher is manipulating. As ESPN’s Alex Scarborough reports, Saban called out Fisher’s Texas A&M team for “buying” its top-rated recruiting class.

“I mean, we were second in recruiting last year,” Saban said. “A&M was first. A&M bought every player on their team — made a deal for name, image, likeness. We didn’t buy one player, all right? But I don’t know if we’re gonna be able to sustain that in the future because more and more people are doing it. It’s tough.

Those are some pretty hefty allegations Saban throws out publicly in a casual manner.

And as one might expect, Jimbo Fisher wasn’t going to just sit there and take it. Because one day later, Fisher called a press conference to address the matter. It was heated:

That was just a sampling of the evisceration from Fisher. He really put the screws to Saban, calling him a narcissist, a czar, and adding, “Some people think they’re God; go dig into how God did his deal.”

You best believe I will address that LIE Coach SABAN told tomorrow. I was & awakened by my son @ShedeurSanders that sent me the article stating that WE PAYED @TravisHunterJr a Million to play at @GoJSUTigersFB ! We as a PEOPLE don’t have to pay our PEOPLE to play with our PEOPLE.

What a wild time for college football. Saban and Sanders were doing AFLAC commercials as recently as last year. Fisher and Saban have a long-running rivalry as contemporaries in the SEC. I don’t think this is going away any time soon. And it definitely isn’t getting any quieter.

Now, if you’ll excuse me, I’m going to attempt to clear my calendar for Oct. 8. That is when Texas A&M and Alabama square off in the latest chapter of a rivalry that has new life. All because the players people pay to see are cashing in. Only in college football!