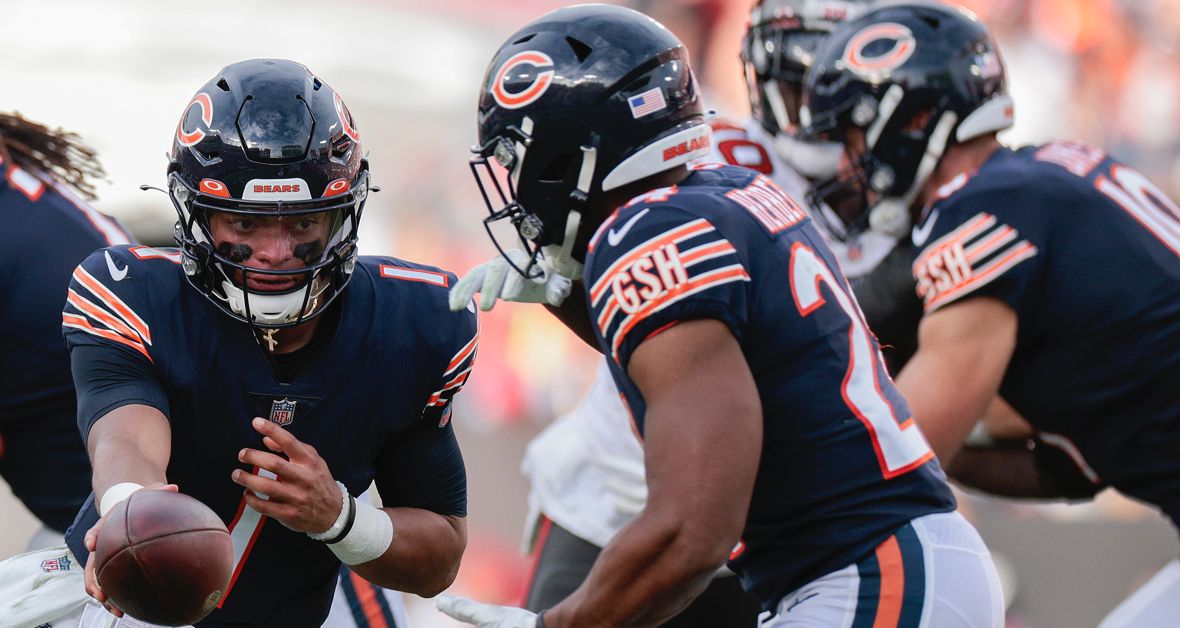 It feels like a decent day to do some grilling. The temperatures aren’t pristine, but I’m not one to turn down a sunny afternoon in the yard.

•   I love the message from Roquan Smith here:

•   Even though Smith has yet to make a Pro Bowl or earn first-team All-Pro honors, there is no denying his excellence. And while racking up tackle numbers in the modern game isn’t the sign of greatness it once was, a further dive into the numbers does a better job of telling the overall story. Because it’s not just that Smith is a tackling machine, it’s that he doesn’t miss tackles or allow easy completions to tight ends and backs. He hassles quarterbacks as a pass-rusher and pass-defender. Smith is a do-it-all player who does everything well.

•   No wonder extending him is a high priority for the new Bears front office.

•   Chicago’s new defensive alignment has me wondering how the Bears will pair linebackers moving forward. Obviously, Roquan is cemented in his spot. And while Nicholas Morrow is a free agent signing on a one-year “prove it” deal, part of me wonders if rookie Jack Sanborn can make some noise. Bleacher Report’s Brent Sobleski dubs the Wisconsin product the Bears’ most exciting UDFA signing, and with good reason. Sanborn was a snagging tackles throughout his collegiate career. Picking up 221 tackles, 29 tackles-for-loss, and 11.5 sacks over the last three years is impressive. As is the nugget Sobleski drops about Sanborn grading out as the third-best Power 5 linebacker by Pro Football Focus’ scale since the start of 2020. Only the highly regarded Leo Chenal and Devin Lloyd had higher grades. And when you’re on a list that also includes Nakobe Dean, you’re really doing something right.

•   Justin Fields is obviously the Year 2 player we want to see ascend to new heights. However, let’s not lose sight of Khalil Herbert. A Day 3 pick in the 2021 NFL Draft, Herbert found a way to contribute as a kick return specialist and running back. The best draft classes have players who chip in unexpectedly, and Herbert did that last year. We saw his kick return usage go down when the Bears were using him more on offense due to injuries that kept David Montgomery and Damien Williams out of the lineup. Based on the production he put forth in limited snaps, I can see the Bears further cutting back on his special teams snaps and giving him more touches on offense.

•   It probably deserves a deeper dive at some point this offseason, but it’s worth asking now while we’re thinking about it — what does a best-case scenario time share look like for Montgomery and Herbert? I feel as if new play-caller Luke Getsy should have a good idea what it could look like in Chicago, if only because he had a similar conundrum in Green Bay. Keep in mind that Matt LaFleur was the Packers’ offensive brainchild and play caller. But maybe Getsy took notes on the snap share between Aaron Jones (51.79%) and AJ Dillon (42.65%). We could see something similar with Montgomery and Herbert this season. Stay tuned.

•   A running game that deploys the ground attack with plays that build on something rather than calling a random assortment of plays because you’ve collected then would help the Bears immensely — which was a discussion point here:

The offense lacked a flow. It didn’t have an identity. Plays felt like they were called randomly. As if there was no rhyme or reason. Just a play call because I’ve got it in my book. Some semblance of scheme with a purpose could do wonders.

The 2022 Bears could have a 60/40 pass/run ratio, but the scheme lends itself to the running game and nearly every pass will be married to a look off the run game. This is what I’m most excited to see in Getsy’s offense. No more pointless random play calls.

“Our run game has to complement our pass, and vice versa,” Bears running backs coach David Walker told reporters Tuesday after the Bears’ second OTA practice. “Justin will be a much better quarterback if we can be productive running the football. I think everybody understands that and knows that. So we’re trying to put a premium on both, really, and the offense is set up, so it kind of marries one another. The things that we’re doing from a run game marry the things we’re going to do from a pass standpoint, the type of people we’ve tried to acquire fit certain roles in this particular offense.

“So, once again, Justin’s going to play better if we as an offense can run the ball effectively. That’s going to open up a lot of stuff for him.”

•   Tired: Establishing the run for the sake of it.

Inspired: Using the run game as part of a balanced attack rooted in plays that play off of one another instead of the disorganized chaos we’ve seen from the play-callers since the start of the 2019 season.

Wired: Run that triple-option because no one will see it coming!

OK, maybe I went a little overboard with that one.

•   The draft board looks pretty open for the Bulls. I’ll be curious to see who they chop it up with before draft day:

If you missed the ugliness in New York or the subsequent "explanation": https://t.co/5iF7fSr3h2