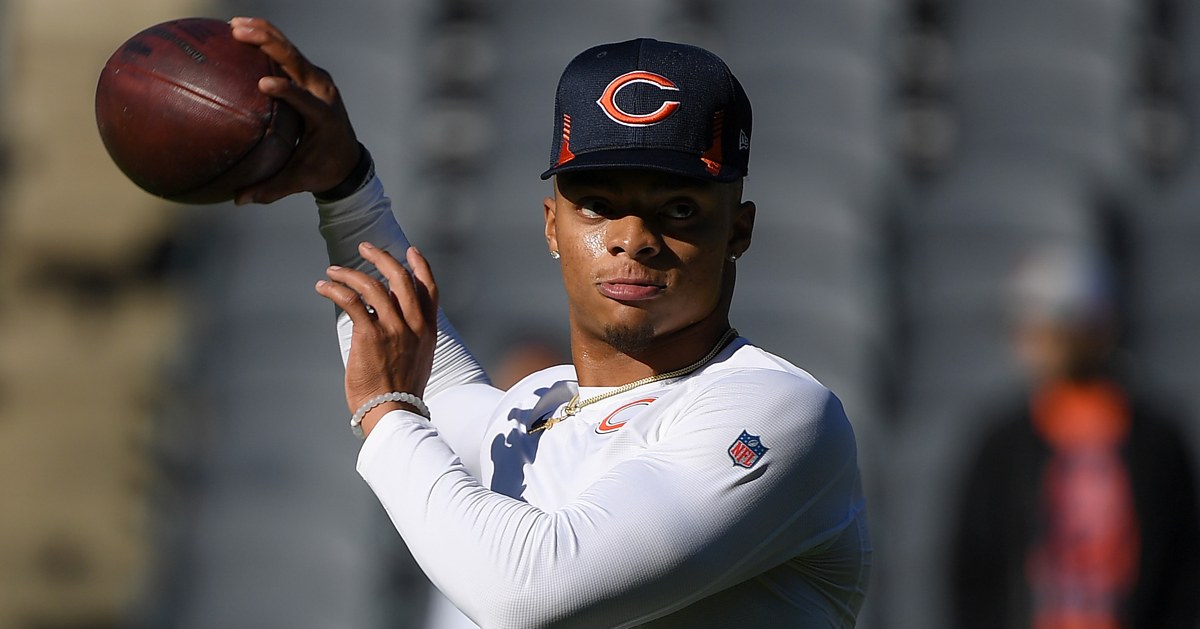 •   Bleacher Report’s exclusive interview with Bears QB Justin Fields has a bunch of fun little nuggets worth sharing. And while we began sharing some yesterday, you’ll want to read through the whole thing so you can find your own favorite factoid. From the top, this one has my attention:

Justin Fields Comes to the Defense of His Receiving Corps – https://t.co/tCybcyVi5m pic.twitter.com/O82Groz2ya

•   I know, I know. You’re probably reading that and asking what else is he going to say? Well, based on how quarterbacks have done well in leveraging less-than-desirable situations into getting whatever they were seeking, I suppose Fields could’ve gone down that road. But he didn’t. Instead, Fields took time to lay out some words that could instill confidence in the little-known pass-catchers he’ll be throwing to this year. Part of me thinks that Bears fans needed to hear it as much as the receivers did. There is something about words of reassurance that hit the spot.

•   Here’s to seeing a more demonstrative type of leadership from Fields in 2022. Yes, I understand how difficult it is to be the alpha leader when your own coaches have you buried on the depth chart. But we saw bits and pieces of it with Fields during his rookie season. Going into Year 2 with no hurdles to clear from that perspective, Fields will get ample opportunities to show the type of intangibles that helped make him a highly touted quarterback prospect. We could be seeing some tangible signs of growth from that department this year. How it translates to on-the-field success is unknown. C’mon, now. We can’t predict the future. But we can dream big things. Isn’t that what the offseason is for?

•   Ya know, I hadn’t really thought of it in this light until reading this from Patrick Finley (Sun-Times) over the weekend. Finley writes the Bears are giving Fields room to grow in 2022 after a 2021 season in which things weren’t designed to best serve Fields as a rookie. Sure, the veteran leadership of Andy Dalton and Nick Foles had its perks. Foles’ fresh and honest style plus Dalton’s emphatic support was valuable. But Fields needed more. He didn’t get it. And even though that wasn’t the reason Fields didn’t live up to lofty expectations as a rookie, that the shape of the room wasn’t fit for his development being the primary thing didn’t help matters.

•   Sometimes the lede sentence encapsulates everything the next few hundred or so words will go on to say. And that is what is happening in this from Jeff Hughes (Da Bears Blog) who writes: Justin Fields is not a finished product at the top of his latest at DBB. It rings true, and it something to keep in mind as we go on this journey together. Fields is a toolsy quarterback building toward what he can become. And while the team’s offensive needs are obvious, Fields’ needs to be more mechanically sound and better when it comes to his football clock are things on the to-do list. Maybe the Bears are betting on building pieces around Fields right now so that they can really take off when the new-and-improved Fields is ready to take flight.

•   Keep in mind that, as of right now, the Bears project to have more than $96 million in 2023 cap space (per OverTheCap.com) and a top-10 pick in the 2023 NFL Draft (per some way too early mock draft forecasts). Chicago’s football team can be in a prime position to strike. Especially if Fields finds another gear.

•   Speaking of the 2023 NFL Draft, Jacob Infante (Windy City Gridiron) has a ridiculously early set of mock draft predictions. We won’t see any team go on the clock for another 11 months, but there is never a bad time to put eyes on what others are foreseeing in our future. Without diving too deep on the prospects, the Bears targeting a Round 1 receiver (Kayshon Boutte, LSU), a second-round pass-rusher (Habakkuk Baldonado, Pittsburgh), and third-round offensive tackle (Anton Harrison, Oklahoma) would make so much sense.

•   Good thing the Bears plan on building through the draft, because there are ample receiver and offensive line prospects who could really bolster this team’s profile moving forward.

•   Hopefully, Fields (and some fresh faces who will jump on board later) can make Warren Sharp update this list sooner, rather than later:

•   The Bulls were fun as heck when they were healthy and fully operational:

I just remembered how incredible this Lonzo block was 😱

J.T. Realmuto Fell for One of the Oldest Tricks in the Bookhttps://t.co/m3tgK5kjPS pic.twitter.com/Vxz0raPnsN