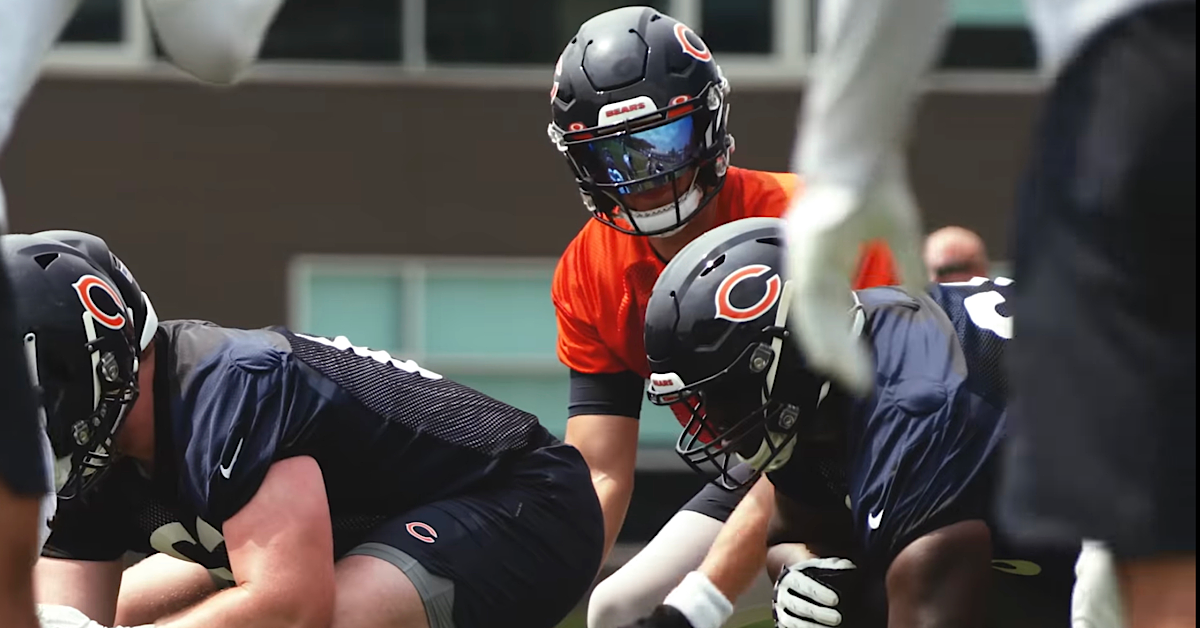 The fourth-quarter display by the Warriors was an all-time worst. Meanwhile, that Celtics run was the real-life equivalent of hitting the he’s on fire button-mashing combo on NBA Jam: Tournament Edition on Super Nintendo. Both teams have two days off to reflect on what went down on Thursday night.

•   Yours truly had a blast chopping it up on Thursday with the folks at CHGO, discussing the Bears, some baseball, and summertime Chi:

Some highlights that I want to expand on from that episode:

⇒   I still feel strongly about Justin Fields. Almost as strongly as I did when the Bears made the trade-up to draft him last year. The only differences between now and then are that Fields (1) has a year of professional experience under his belt and (2) isn’t dealing with a coaching staff that was stubborn with its development plan. Meanwhile, the loud tools still exist. As do the impressive athleticism and arm talent. And, perhaps most important of all, Fields’ will to win and leadership skills are still in tact. It is only June. No meaningful snaps will take place for another few months. But a rookie year that could’ve damaged Fields doesn’t seem to have done so. And that is a takeaway I think we should all keep in mind as we move along.

Here’s to Fields’ confidence in his teammates paying off:

⇒   The jury is still out on first-year GM Ryan Poles, as it should be. C’mon, now. This is a general manager who is just entering his sixth month on the job. Even still … I feel better about the team’s direction now than I did a year ago at this time. Although, I’ll admit much of that is has to do with Poles having a plan that isn’t rooted in doing anything and everything for the sake of job preservation.

It’s not as if the Poles plan has gone off without hitches. Fumbling the Larry Ogunjobi situation (which likely kept the Bears from hitting other FA targets) and seeing the Ryan Bates situation (grrr!) fall apart are tough blows to deal with early in your tenure. But I tip my cap to Poles exercising the type of patience necessary to not fall into the same trap other first-year Bears GMs stumble upon when they get the big job. Keep it up, and I imagine good things will follow.

⇒   There is nothing better than #SummertimeChi. And yesterday was a reminder of how many things I haven’t done in the city that I want to do. Architecture tour. Neighborhood festivals. New eats. One thing I’m seeing growing as a popular summertime Chicago event is a day trip to nearby areas. Think something like a camping trip or an adventure out to a nearby minor league baseball game. That wouldn’t necessarily count as a summertime Chicago thing (city limits being what they are), but some of the beauty of Chicago is the city-adjacent things we can do with our free time. Life is short. Soak it all in.

The Madden franchise has been putting out a disappointing product in recent years. But I hope they do right by the icon with this year’s release.

•   Alex Kay (Bleacher Report) wonders why a handful of high-profile free agents remain on the market. Among them are a handful of conceivable Bears fits. If all things were equal, the likes of Julio Jones, Odell Beckham Jr., Duane Brown, and Eric Fisher would make sense as Chicago targets to varying degrees. But because we’ve seen how the Bears have been targeting players who are (1) 30 or younger and (2) players without major recent injury concerns, it isn’t surprising that these players haven’t been explicitly connected to the Bears lately (if at all).

•   Josh Schrock (NBC Sports Chicago) explores Will Fuller V’s fit as a Bears free agent option. Fuller is one of those free agents who probably should have found a home by now, but hasn’t. Two things stand out from Schrock’s dive. Firstly, Schrock notes Fuller has an average depth of target of 15.0 yards in his career and is a run-after-the-catch machine averaging 5 yards of YAC after receptions. However, Schrock underscores how Fuller’s injuries costing him to miss 35 percent of his games as a pro essentially boils down to penciling Fuller in for six games he won’t play. That feels significant enough to raise a caution flag.

Translation: Fuller is the downfield threat that Fields could lean on to create explosive plays, but might not be able to do so if his body doesn’t hold up.

•   Ultimately, Fuller represents a high-risk, high-reward option in terms of weighing injury potential versus play potential. But the potential low-cost buy-in factor sure has my attention. Considering how the Bears were OK moving on from players such as Khalil Mack, Akiem Hicks, and Eddie Goldman (who had injury issues in recent years), it can be tough envisioning Chicago rolling the dice on Fuller. But that doesn’t mean it can’t (or won’t) happen. This situation remains worth monitoring.

•   In the meantime, Byron Pringle WR2 season is on the horizon:

Byron Pringle could end up playing a bigger role for the #Bears offense this year than many give him credit for.

As an explosive slot with some size, he could be a valuable short-route threat. Expect a lot of targets from Justin Fields for him early in the season.

I’ll say this about Pringle: He has the potential to wear a bunch of different hats for these Bears. And while that isn’t splashy, it isn’t inconsequential. Pringle playing WR2 snaps and the role of core special teams contributor makes him a decent value. Jack-of-all-trades types are often overlooked and underrated. In the end, there is a real chance we’ll look back fondly at the Pringle signing if he is the of multi-purpose contributor he projects to be.

•   Something for your podcasting ear:

We had @HerbHoward411 from the @itsthebigs join the show today.

Herb and @NicholasMoreano had an unfiltered discussion on a variety of #Bears topics.

Make sure you check out today’s episode. https://t.co/taVuHXhpu5

•   The Bears are mourning the loss of Joe Krajniak, a long-time groundskeeper who died at 83.

•   Teeth stuff, bag stuff, and vacuum stuff are among your Deals of the Day at Amazon. #ad

•   A friendly reminder that Davante Adams is no longer our problem:

Still can’t get over Davante in the silver and black 🔥

•   I think this announcement makes the Niners’ pursuit of J.C. Tretter inevitable…

… so I apologize if you were holding out hope for the Bears scooping him up ahead of training camp. And while I wouldn’t put the odds at 0% just yet, they’re not that far off.

•   The Cubs haven’t lost a game since LAST MONTH. But brace yourselves, the trade rumors are coming:

June is here, which means the trade-related chatter is gonna start picking up. Latest from the rumor mill: https://t.co/RN5fGVbW2k pic.twitter.com/s6UWE1jBu3

The #Blackhawks Reportedly Lost Their Cap Specialist Because of THAT Town Hallhttps://t.co/dxLvGa8ss9 pic.twitter.com/1apiEtwG8I