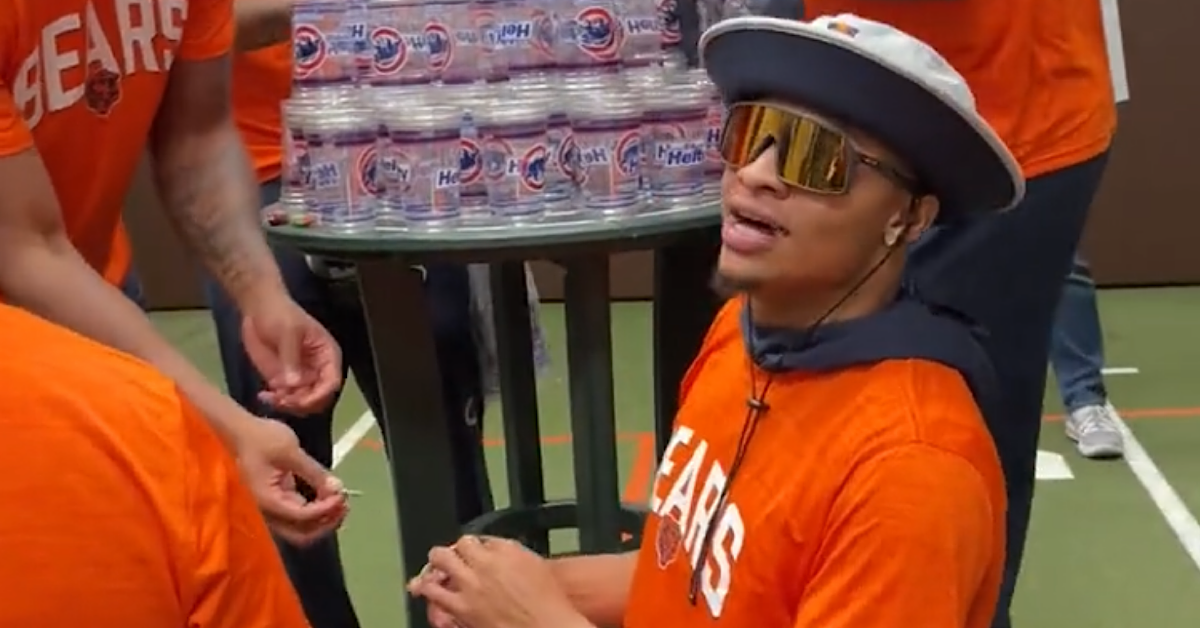 Even the most closely contested game of this year’s NBA Finals had the triumphant team winning by double digits. What an odd postseason by NBA standards.

•   There are few things I find as fun as professional athletes being good at sports other than their own. But cup-stacking excellence isn’t something I was expecting from these Bears:

•   Here’s hoping they have some more surprises up their sleeves during football season. Preferably, the good types of surprises.

•   One thing I hope we don’t lose sight of is the importance of team-building activities. Part of it has to do with so many new bodies in an offseason in which there is a new general manager and head coach, waves of changes in the front office and coaching staffs, and the addition of 50+ players via free agency and the NFL Draft. The Bears might need to wear name tags to get to know each other around Halas Hall. But perhaps something like playing home run derby at Wrigley Field will help draw this group together. At minimum, it’s fun to do not-work things with your co-workers. So, at least they have that going for them.

•   When I was a journalism school student, I had strong professors with backgrounds at the Chicago Tribune and Associated Press driving home the importance of making sure that the energy in your body type matches what you put in your headlines. Because, yes, people gravitate to bold headers. HOWEVA, not backing up your title with strong text is an easy way to make your readers do that confused head tilt. Which brought me to the Bears section in this B/R piece sharing what has been learned about every NFL team this offseason. As one might expect, the narrative of the Bears not believing in building around Justin Fields is one author’s takeaway headline. But also, in the body text beneath the headline, there is a line that says: Chicago may have plans to eventually build around Fields and treat him like an actual franchise quarterback. But Poles and Co have failed in that regard thus far.”

•   To an extent, that vibes. The Bears didn’t equip Fields with an ace receiver or lockdown left tackle. But that doesn’t mean the front office didn’t build around him. Yes, the Bears focused this offseason’s spending on the defensive side of the ball with Justin Jones and Al–Quadin Muhammad on the defensive line. They also doubled down on the “D” with the second-round selections of Kyler Gordon and Jaquan Brisker. But I wonder if those additions can count as votes of confidence in Fields. In other words, are Poles and friends so confident in Fields’ future that they felt they could kick the can down the road to next year when it comes to splashy offensive additions in order to plug other needs with better value and fits this offseason. That isn’t an idea that is totally out of step. Is it?

•   This discussion brings me back to a larger point that Akiem Hicks’ comments in signing with the Bucs put a light on. Because, yeah, Hicks dropped some truth bombs when it came to the Bears’ failures in the quarterback development department. It allowed us the opportunity to make it known that Chicago’s front office could stand to add help for Fields on the offensive side of the ball. But it also gave us the runway to underscore the importance of building a well-rounded team. Because if you listen closely to Hicks’ comments, his departure for Tampa Bay wasn’t solely rooted in upgrading at quarterback. Instead, Hicks is joining a well-rounded team that is well-versed in playing complimentary football. If the Bears want to be like that, they’ll need to get the quarterback right. Also? They’ll need to build out a strong 53-player roster that can fully take advantage of having a skilled QB.

•   Sometimes, on rainy afternoons, I wonder what a more well-rounded Bears team that was put together in a better and more efficient (and effective) fashion would’ve fared in 2021. And I dream of what the narrative surrounding Fields would be entering this season. For instance, how would we think of Fields if the Bears defense didn’t give up 24 second-half points (including 18 in the fourth quarter) to the Niners in a Halloween afternoon loss. Or if the defense could’ve come up with one lat fourth quarter stop in the final 2 minutes of that loss to the Steelers on Monday Night Football a week later. It’s almost as if players like Kyler Gordon and Jaquan Brisker could’ve been helpful in the secondary during those contests…

•   Don’t get me wrong. I still feel as if the Bears missed opportunities to bolster the offense. But as we were pointing out yesterday, spending a whole bunch of cash doesn’t always work.

•   I sure hope the Bears defense is ready for this guy on Christmas Eve:

224 passing yards, 95 rushing yards, five total TDs. @JoshAllenQB made sure you knew his name after this performance pic.twitter.com/i2CheCY2Vg

•   With Marcus Stroman hitting the IL, maybe Greg wants to throw on that Cubs uni for a weekend? They already got plenty of “Stroman 0” hanging up in the gift shop:

•   Wish the Bears weren’t showing up here on the wrong side of 99-yard touchdown passes:

Passing touchdowns are so much sweeter when they go for 99 yards. 😏 (via @nflthrowback) pic.twitter.com/m8HGxPMs3x

•   Washington Commanders Head Coach Ron Rivera gave Defensive Coordinator Jack Del Rio $100,000 for his comments about the Jan. 6 insurrection and threw down a lengthy statement worth reading in full:

•   Holy smokes! There is a lot to take in here with this Chargers-Spanos family story:

Here’s the Coaching Candidates We Are NOT Considering for the #Blackhawks (And Why)https://t.co/NebJGAk7BP pic.twitter.com/9SBGpWHWlR

As Rumors Swirl, Nikola Vucevic is “Under the Impression” He’ll be in Chicago Next Seasonhttps://t.co/Dhpg1ylPEj pic.twitter.com/c3oz2mnoZE

•   There aren’t many (if any) free agent signings who have embraced Chicago as fully as Jason Heyward. And that’s despite his notable struggles at the dish. With that in mind, I’m totally here for a Heyward revenge tour: