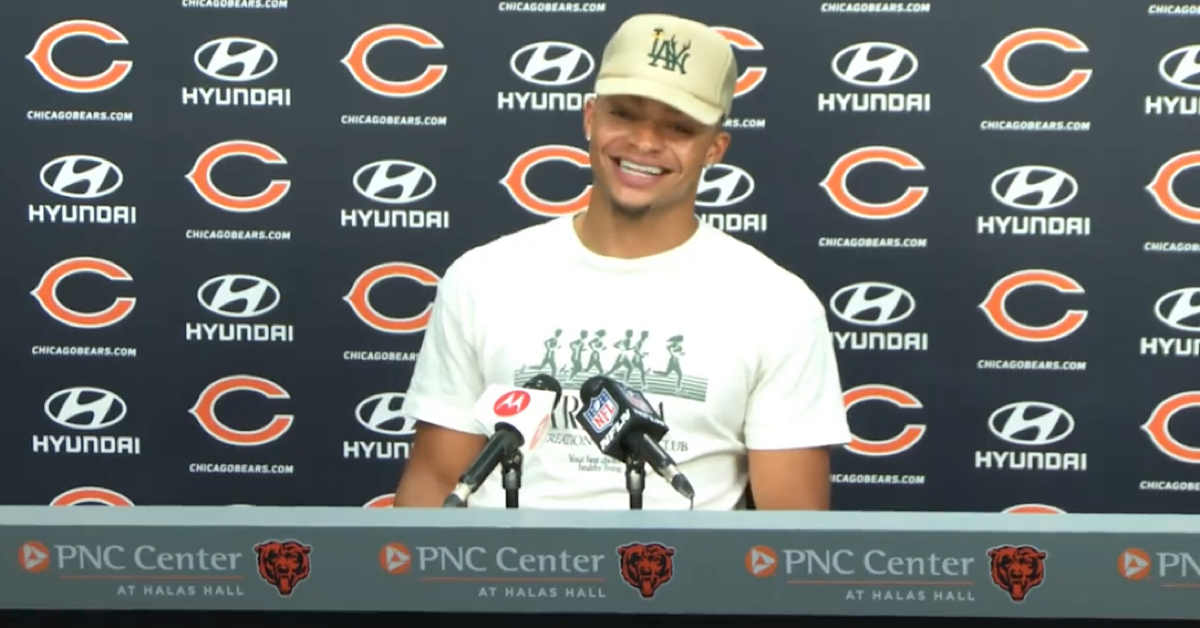 It’s been a newsy first day of mandatory full-squad minicamp at Halas Hall.

Stud defensive end Robert Quinn isn’t around for the action, choosing to skip out on festivities to train on his own. On the other side of the trenches, offensive lineman Dakota Dozier left practice early due to an injury. But Justin Fields was available, which is always a treat. Fields spoke with the assembled press at Halas Hall on Tuesday. We’ve pulled some highlights, adding commentary for depth and context. Please enjoy.

Find someone who speaks about you the same way Fields speaks about his No. 1 target, wide receiver Darnell Mooney:

He honestly makes me want to do more. Just seeing how much he works, how hard he works, it’s kind of contagious. Getting more guys around us, letting them see how hard we work, them seeing that will make them want to work. It’s definitely been good.

If only all of our relationships worked as well as theirs.

Seriously, who couldn’t use someone pumping them up, working hard, and inspiring you to be better? We could all use that type of influence in our life. Fields even discussed how he and Mooney were even challenging each other to see who was working harder and later in the facility … ON AN OFF DAY. Respect that!

Self Evaluation is Key

One of the most important thing a quarterback can be is self-aware. Especially a quarterback early in his pro development cycle. To be clear, you don’t want QB1 to be in their own head. But you’d like for them to be cognizant of what they’re doing, where they can improve, and how they can go about it. So, when Fields was asked to assess his performance during the first mandatory full-squad minicamp of the summer, I found his reply to be satisfactory.

I’m doing my best to not freak out about summertime practice interceptions. There is no reason to feel strongly one way or another about when they happen. Because — guess what? — they’re going to happen. Interceptions are inevitable. In other words, I’m as happy that Jaylon Johnson got one on Fields as I am about Fields understanding that practice interceptions aren’t the ones that will hurt the most.

Also? I’m digging that they’re putting a lot on Fields’ plate right now. In a season where the most important takeaway might be in figuring out what this team has and who it can build with, there is nothing wrong with a little trial by fire in June.

One of the longest-running concerns about the Bears offense is along the offensive line. Who is playing where? And when will we know? What bodies are responsible for protecting Justin Fields? Which linemen will be clearing running lanes for David Montgomery, Khalil Herbert, and others? So. Many. Questions. Naturally, we all want answers. After watching the Bears’ offensive line play inconsistently last year, we’re all hoping for some good answers. Speaking of which, Fields delivered a good one when asked how soon he’d like to see that group settled.

I’m not in a rush. I think we have a lot of time. At the end of the day, it’s whoever does the job the best is going to be the best fit for us. So I’m not really in a rush to see who’s playing what position on the O-line. I think, right now, it’s about us developing, learning the system, and getting better every day.

For more from Fields, check out the video below: