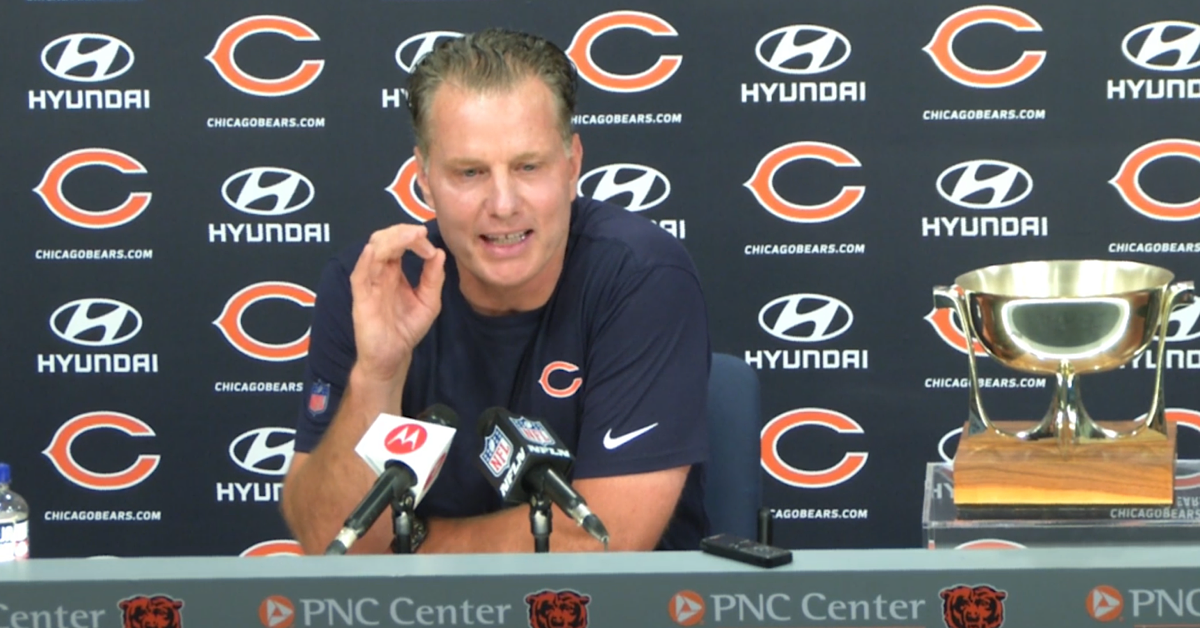 In quiet moments, I’ll chuckle to myself thinking about Matt Eberflus’ underlying message upon his hiring. That whole get your track shoes on, because we’re gonna run sentiment is great in theory. You want the Bears to be fast and hit hard. But we know that, in reality, that Soldier Field turf monster lurks.

Still … the idea of playing fast should hit home with players. Especially since that was one of Eberflus’ messages as the team was wrapping up the third (and final) mandatory minicamp practice on Thursday.

But there was something else that caught my ear from Eberflus, and I’ll transcribe it below.

The summer for these guys is gonna be important. And the message I said after practice to them was to come back lean, fit, and strong. Obviously, I left them with ‘get your track shoes on’ – like I started my first press conference – because we’re going to be running once we get to training camp. Training camp’s not to get in shape, you should already be in shape. You should be ready to go for training camp, because we’re blowin’ and goin’ from Day 1. And then just to be safe. Be careful who you hang around and be mindful of that, and where you are. And to be safe during the vacation, this little time-off break we have before training camp.

There are three main takeaways for me from Eberflus. Firstly, the importance of showing up to camp in shape and ready to rock. Once upon a time, training camp was a time to get players into shape after a summer off. But between the institution of offseason training programs and players working out alone on their own volition, training camp is less about getting players in game shape and more about refining things. And while there are still players who show up not in tip-top form, Eberflus’ message is clear that he is willing to leave you behind if you’re not up to speed.

Secondly, the anecdote about being safe and mindful of your presence during this period away from the team sticks with me. Coaches aren’t babysitters. And, to be clear, players are adults who can make decisions on their own. However, it feels like every offseason features stories of things going sideways for players between the end of mandatory minicamps and the start of training camp. A most notable such instance folks might recall is Jason Pierre-Paul’s gruesome fireworks accident that mangled his hand. If you’re reading lunch while reading this post, I’d recommend you bypass reading that link from SI. Heck, I might recommend passing on it altogether because it’s pretty detailed and could be triggering if you’re even the tiniest bit squeamish.

Thirdly, and what might be the ultimate takeaway, is the concept of taking care of yourself — both physically and mentally in what’s left in the offseason. This is an important year for so many Bears players. There are openings for starting jobs and contributing roles that are essentially open competitions. Those who are in tip-top shape — both mentally and physically — will start camp with a leg up on anyone who isn’t on top of their game. Don’t want to be left behind? Then be on your P’s and Q’s this summer and show up at camp ready to run. Otherwise, you put yourself at risk of putting yourself behind others. And that is an easy way to get lost in the weeds.

In the end, I hope that part can resonate with players and fans alike. All of us want to see our favorite players back in the fold when camp kicks off in July. And I definitely look forward to seeing your faces at Halas Hall when they open it up for fans. Although, I’ll admit that I must take the first half of Eberflus’ statement to heart, as I need to whip myself into playing posting shape for when camp opens.

For more from Eberflus, watch the video below: