N'Keal Harry Welcomed Himself to Chicago, So Let's Watch Some Highlights (UPDATE: It's Official) Skip to content

It isn’t officially-official yet, but N’Keal Harry is about to be the Chicago Bears’ newest wide receiver.

So tweets the man, himself:

In case you’ve been napping away the last two days, the Bears are reportedly set to acquire Harry in a trade with the Patriots for a 2024 seventh-round pick. (UPDATE: It’s officially official!) Or to put it in a different light, Chicago’s football team is acquiring a wide receiver who was a 2019 first-round pick and two-time first-team All-Pac 12 performer for the same price as what was sent to the Raiders in the Eddy Piñeiro trade before the 2019 season. Seems like a decent value to me. And the payoff could be tremendous if the Bears can get more out of Harry than the Pats did.

Harry didn’t do much in New England, so the bar to clear is low. But the ceiling is unlike any receiver the Bears brought in this offseason. So, let’s peruse some highlights.

Only 15 days until we get to see Harry (and the rest of the Bears) in the team’s first training camp practice. 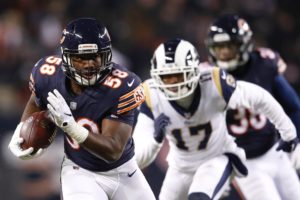