Around the NFL: Myles Garrett Charged with Reckless Driving, Tua to Play vs. Bengals on TNF, Brett Favre Continues to Suck, More Skip to content 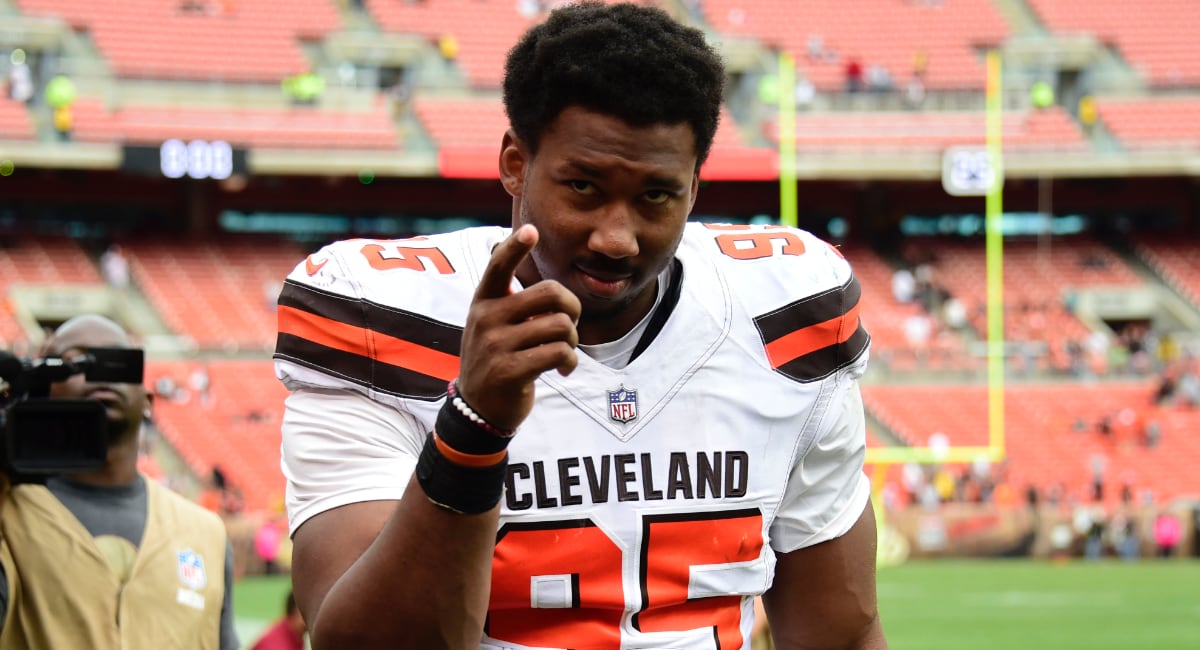 I’ll never understand why people need to roll the dice with their and other people’s) lives with silly decisions like driving recklessly or impaired. Myles Garrett becomes the latest example in the professional sports world to issue the reminder that it’s always better to err on the side of caution and sensibility. Drive safe, kids.

Cleveland Browns pass rusher Myles Garrett was charged with failure to control his vehicle on Thursday, with unsafe speed for the type of roadway being traveled appearing to be a contributing circumstance, according to the Ohio State Patrol.

The charges stem from a Monday afternoon accident in which troopers from the Ohio State Highway Patrol discovered a gray Porsche 911 Turbo S driven by Garrett on the side of the road with rollover damage. While Garrett told police that he lost control of the vehicle when he swerved to “avoid an animal on a wet road,” investigators have deemed that Garrett was traveling 65 MPH in a 45 MPH zone, struck a fire hydrant and overturned the car several times, according to the Ohio State Highway Patrol crash report.

This is not the first incident involving reckless behavior behind the wheel for Garrett. A recent report by Phil Trexler revealed that Garrett has been stopped for speeding at least six times since joining the team in 2017, according to court records.

“Additionally, multiple tickets show Garrett was driving over 100 mph, including one 24-hour period in which Garrett was stopped twice – once for driving 120 mph and a second time for 105.”

Garrett reportedly suffered a shoulder sprain, biceps strain, and lacerations, which have kept Garrett out of practice this week.

While there has been no official ruling into the investigation, NFL executive vice president Jeff Miller said Wednesday that all indications point to the Dolphins being in the clear:

“(This process) usually takes a week or two to make sure that we’ve spent enough time with all of the people who were involved in the protocol, and the evaluation to get a sense as to whether it was followed,” he said. “Every indication from our perspective is that it was. I know that the player, the coach and others have spoken to this.”

It’s a short turnaround for Tua and the Dolphins, who are set to play the Bengals in tonight’s ‘Thursday Night Football’ matchup in Cincinnati. While Tagovailoa has been bothered by nagging leg and back injuries, he is expected to play in tonight’s game.

If the massive welfare scandal that has Favre as a leading player in wasn’t enough to make you think that former Packers quarterback Brett Favre is a gigantic fraud, new reports that Favre’s charitable foundation donated more than $130,000 to Southern Mississippi’s Athletic Foundation at the same time should do the trick.

“From 2018-2020, Brett Favre’s charitable foundation, Favre 4 Hope, which has a stated mission to support disadvantaged children and cancer patients, donated more than $130,000 to the University of Southern Mississippi Athletic Foundation during the same years that Favre was working to finance a new volleyball center at the school.”

The Athletic’s Katie Strang and Kalyn Kahler go on to shed more light on the questionable donations of Favre’s foundation during the years in question:

“In the same years Favre was soliciting money to build the volleyball facility, his charitable foundation, which received public donations, significantly increased its contributions to USM’s athletic fundraising arm. Tax records show that Favre 4 Hope gave the USM Athletic Foundation $60,000 in 2018, when no other charity received more than $10,000. The next year, it gave $46,817; the next highest gift, to the Special Olympics of Mississippi, was $11,000. In 2020, Favre 4 Hope sent USM’s Athletic Foundation $26,175; no other organization received more than $10,000.”