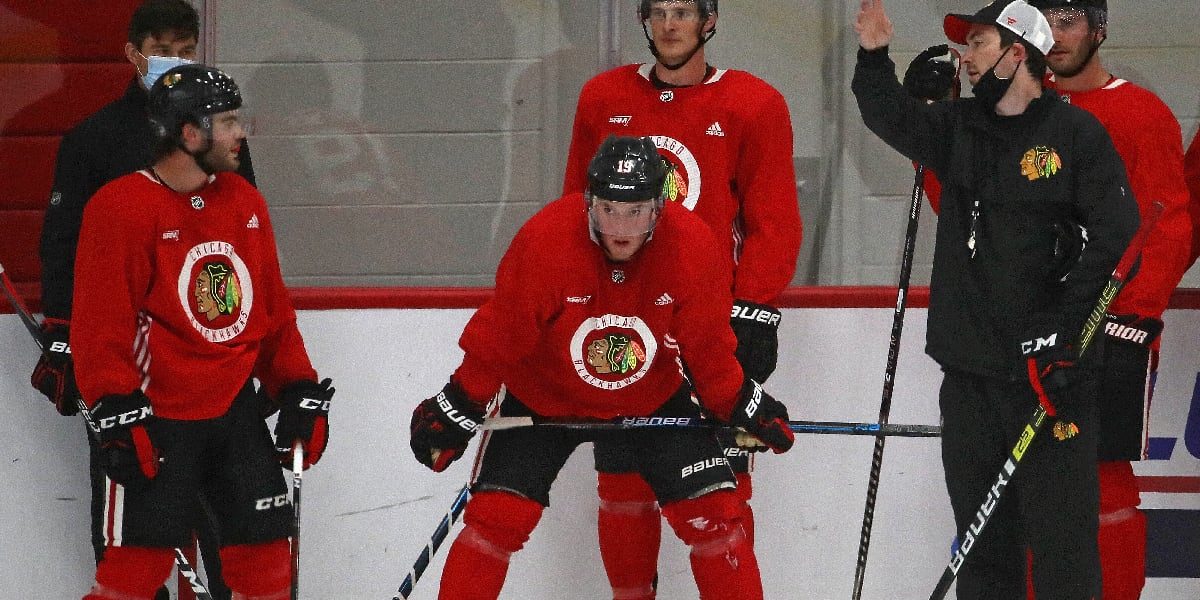 Here we are, the opening of the 2021 Chicago Blackhawks season. Allow me to re-introduce myself, my name is not HOV-it’s Mario. I’ll be your captain aboard the barf-train that probably will be this season of Blackhawks hockey. I’d love to be more optimistic, and I usually am, but my goodness this season went off the rails before it even had a chance to get started. Alex Nylander gone. Kirby Dach gone. Jonathan Toews gone until who knows when. SEESH, at least give them a chance to get my hopes up.

Nevertheless, the season is officially underway!

•   It may have taken until the Blackhawks were actually on the ice warming up before the first session of training camp, but they finally released their camp roster today, which … woo! Hockey. They were the 31st out of 31 teams to release their training camp roster to the public.

•   If you missed it on Sunday night (because you were watching the Bears back their way into the playoffs), Dylan Strome signed his contract extension with the Blackhawks. With the injury to Dach and the undisclosed illness with Toews, Strome walks into camp as the Blackhawks top center – for better or worse. Strome spoke to the media after the first session about how his contract negotiations went down, saying “I just wanted to get out here and not miss any days of camp, so thankfully we got it done.”

•   So what is the opening of training camp like without Jonathan Toews around? Alex DeBrincat spoke to the media after day one without Captain Serious:

DeBrincat on Toews: "It’s tough. We just found that out probably a week ago or something. That was a hard hit to us. But we’ve got to work through it. Obviously he’s one of our best players, our captain. Definitely tough not having him here."

•   Jonathan Toews has been one of the most reliable constants for the Blackhawks over the last decade and a half. There’s a reason he was named one of the youngest captains in NHL history. The guy is a pro’s pro and has been a tone-setter for the Blackhawks for years. It will be very interesting to see who steps up without Toews around to lead the locker room. Duncan Keith and Patrick Kane are givens, and the main reason Brent Seabrook’s is still with the organization is because of the impact he has on the locker room. But you can’t give Seabrook a leadership letter if he’s going to be the seventh or eighth defenseman on the roster. Guys like DeBrincat, Connor Murphy, Dylan Strome, and Andrew Shaw will likely be leaned on more to step up and lead the Blackhawks in Toews’ absence.

Patrick Kane: "It doesn't really feel like a team without Jonny as your captain… He's no question our biggest leader. You miss him for sure." #Blackhawks pic.twitter.com/1BNZcG3KUS

•   Also missing from day one of training camp were the aforementioned Brent Seabrook, Evan Barratt, Zack Smith, Carl Soderberg, and Pius Suter. Both Seabrook and Barratt were deemed “Unfit to participate” in the first session, while Soderberg had immigration issues to iron-out. Suter was also listed as “unfit”, but did workouts with the team according to Charlie Roumeliotis. Zack Smith, who was reportedly healthy and ready to go for training camp, was placed on waivers on Monday morning.

•   Not that anyone has real high hopes for Seabrook’s return from shoulder and double-hip surgery last season, and yes it’s only missing one day (so far), but at some point you have to wonder what is left in his tank and whether or not HE is wondering the same thing.

•   If you can remember back to mid-November, the Blackhawks community welcomed its newest fan as Patrick T. Kane III was born.

•   Patrick Kane, the hockey player, spoke to the media after practice about what being a new dad is like, “It’s been a lot of fun. I can enjoy my mornings skating and training, and then there’s no better feeling in the world than going back home seeing Amanda and my son.” With his new Dad strength, expect Kane to score 50 goals in 56 games and probably win the Hart Memorial Trophy and drag the Blackhawks to the Stanley Cup (probably not).

•   As with any opening day, training camp provides players with a ton of optimism since they haven’t played a game yet. Kane said he sees a lot of opportunity with this Blackhawks roster:

•   Being the player who would get the largest return via a trade on a team that is likely going to rebuild for the next few seasons can’t be much fun mentally. Hearing Kane talk about being excited to be playing with so many new faces and younger players gives you the sense he’s not necessarily eager to find the emergency exit out of the United Center. We’ll see how long that lasts once the season begins.

•   Speaking of the new guys, check out Scott King’s piece about former Wisconsin Badgers captain Wyatt Kalunyk and why he believes he may be a surprise breakout player during Blackhawks training camp. On Wisconsin.

•   Another new Blackhawks defenseman who had success in college, Ian Mitchell has a TON of expectations on him and he’ll more than likely be given every opportunity to find success on the NHL roster. I mean, Stan Bowman doesn’t just say this last summer, “We thought Ian could have been in the NHL with us last year (2018-19),” without truly believing it. Bowman’s future with the organization is tied to Mitchell’s success. I said Bowman, not Pace right? Anyway, check out Charlie Roumeliotis’ interview with Ian Mitchell ahead of training camp.

•   In World Junior Championships news, the only Blackhawks prospect left standing is Landon Slaggert of Team USA. Slaggert and his rag-tag group of yanks take on Finland on Monday night in the semi-finals, with an opportunity to play for the Gold Medal on the line. The Americans last won Gold at the World Juniors in 2017.

•   In minor league news, the American Hockey League (AHL) held their Board of Governors meeting today to figure out which teams will be opting in or out of the shortened 2021 season. The expectation was a healthy chunk of AHL teams would not be operating for the 2021 season, set to begin on February 5. The Rockford IceHogs, the AHL affiliate of the Blackhawks, appear to have opted-in to the 2021 season:

•   The Blackhawks NEED their minor league teams more than ever this season. The spill over from the NHL roster and the taxi squad this season will still be populated by players who will be looked at as part of the rebuild/retool/replenish/rehydrate, whatever you want to call it, of the Blackhawks future. Players like Alec Regula, Chad Krys, Matt Tomkins, and Andrei Altybarmakyan could all find themselves playing significant AHL minutes this season.

•   Lastly, would you expect anything less from a place named ICELAND?