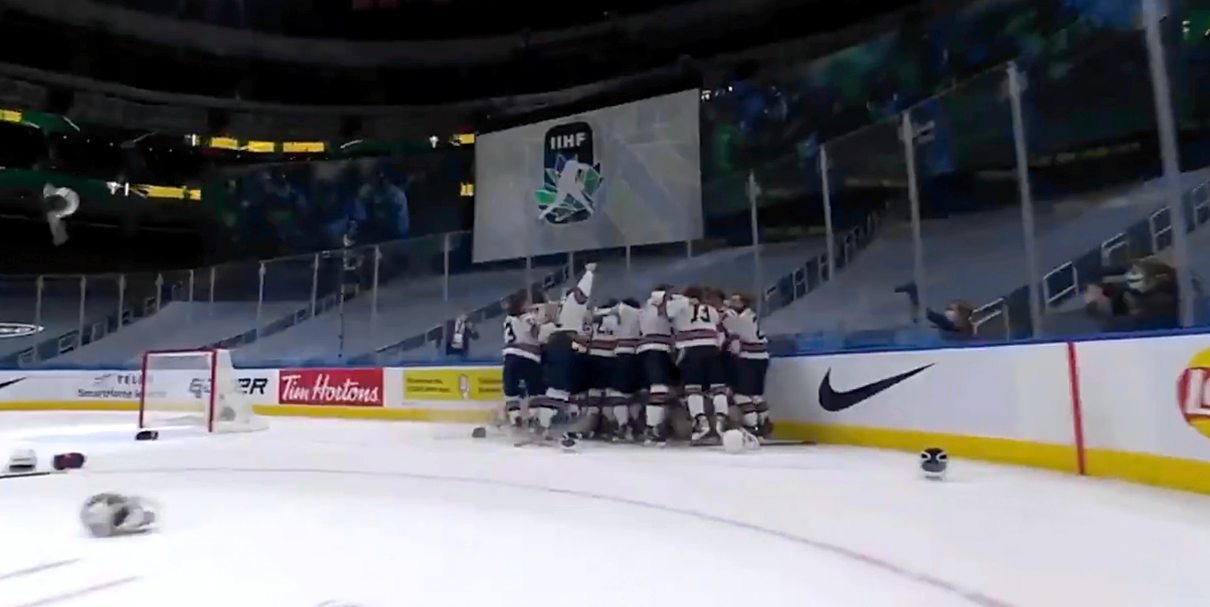 Landon Slaggert may have not scored a goal, or registered an assist, but it doesn’t matter in the end, because he and Team USA topped Team Canada in the World Junior Championship Gold Medal game, 2-0 on Tuesday night!

Slaggert, a third-round pick by the Blackhawks in the 2020 Draft, played his role en route to the USA winning its fifth World Junior Championship Gold Medal. Nothing like adding to their collection from 2004, 2010, 2013, and 2017 to start a new decade. The win also marked the fourth-straight time the USA has beaten Canada when the two countries have met in the World Junior Championships Gold Medal game.

The Final, held in Edmonton, was a remarkable back-and-forth contest that felt like a high-pressure Gold Medal game being played in Canada — even without fans in the stands.

Team USA was a significantly less-talented team than the Canadians on paper. But they say games are not played on paper. The States out-worked the Canadians for the first 30 minutes, scoring two goals in that time frame thanks to Los Angeles Kings prospect (and Illinois-native) Alex Turcotte, and Anaheim Ducks prospect Trevor Zegras, who was named the tournament MVP. The Canadians found their legs mid-way through the second period and started to apply their own pressure to Team USA but couldn’t break through. The third period saw the USA hold its 2-0 lead, while being out-shot 15-1. Florida Panthers prospect Spencer Knight shut the door on the Canadians for the shutout win, earning player of the game honors.

But let’s talk some more about Slaggert, seen below getting his gold medal:

The Blackhawks’ 2020 third-round draft pick from South Bend, Indiana, becomes the fourth American Blackhawks prospect to win Gold at the World Junior Championships joining James Wisniewski (2004), Jeremy Morin (2010), and Ryan Hartman (2013). And while he wasn’t a highlight-creating, point-scoring threat for the USA, Slaggert perfectly played his role of the fourth-line grinding center. He was regularly causing havoc in front of the opposing net all tournament. In the Gold Medal Game, Slaggert picked up one shot on goal and totaled 12:22 of ice-time.

Of course, it’s a bit bittersweet to see Canada fall short after Kirby Dach was forced to miss the entire tournament after suffering a broken wrist. Dach would have been not only Canada’s team Captain, but most likely its best player in the tournament.

Anyway, back to the good stuff. Congrats to Landon and his Team USA teammates. Slaggert will now head back to the University of Notre Dame to rejoin the No. 18 ranked Irish, where he has one goal and two assists in six NCAA games this season.

We leave you with this: