We Don't Need Analytics to Tell Us the Blackhawks Are in for a Tough Season, But Well ... | Bleacher Nation Skip to content

The divide between the analytics community and the eye ball test crowd in hockey is pretty well split. I try to live somewhere in the middle, where analytics can help us break the game down and understand what we’re seeing, while making sure we’re actually still SEEING what we’re seeing. Hockey is such a fluky game, you can’t fully calculate the human element into the analytics. But they do give you a very good picture of what to expect and help weed out some noise and bias on the margins. One of the best in the hockey analytics game is The Athletic’s Dom Luszczyszyn.

For this exercise I’m going to use Dom’s model for the Chicago Blackhawks expectations for the 2021 season, as well as his breakdown for strength of schedule impact on fantasy hockey.

The short of it: Blackhawks are going to have a bad time.

But we already knew that, yes? Unproven goaltending, injuries to major players, shaky team defense, an unproven coach, etc. We knew all of that. But looking at it quantifiably, where can the Blackhawks expect to rank in the NHL? 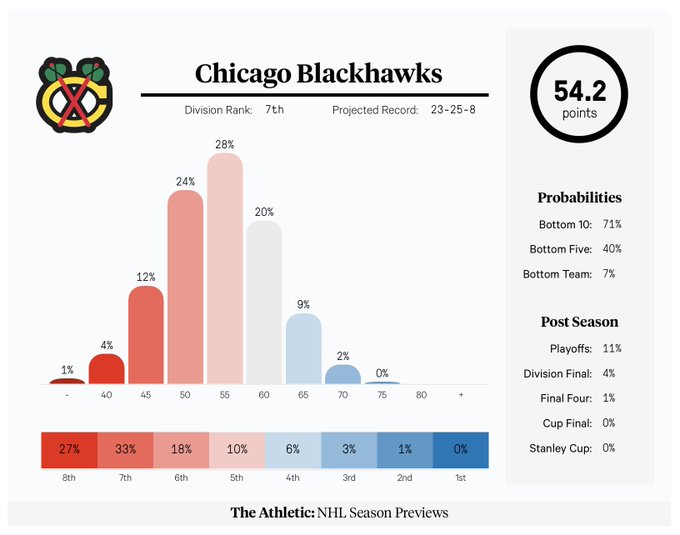 The 54.2 point projection from Dom’s model ranks in the bottom-five of the NHL with only the Detroit Red Wings, Los Angeles Kings, and Ottawa Senators behind the Blackhawks.

It helps that the Blackhawks will be playing the Red Wings eight times in the 2021 season, but Chicago is going to have one of the tougher goes of it as far as impact of opponent in 2021. According to Dom’s model on strength of schedule impact on expected goals for (xGF), the Blackhawks drop to from 3.00 xGF to a 2.95 (sosGF) when factoring in their schedule. The -.05 difference ranks them with the ninth-biggest negative impact. 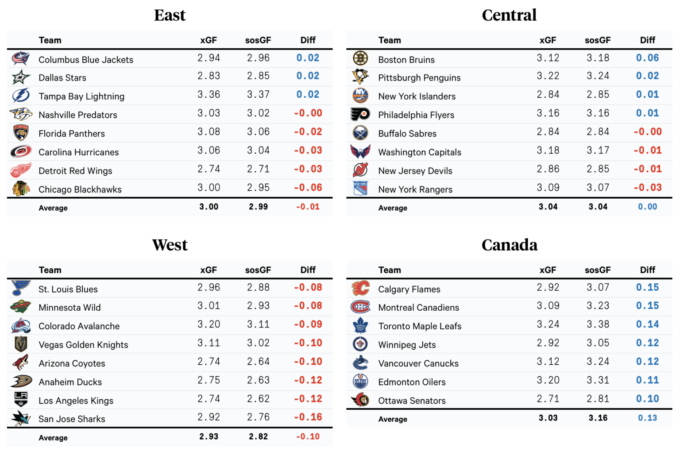 Essentially, the quality of defense and goaltending in the Central Division (the division the Blackhawks will face this season) give them a below-division average in goal scoring, something that will already be a challenge for Chicago this season with Kirby Dach and Jonathan Toews out. Indeed, adding in the Carolina Hurricanes and Tampa Bay Lightning to the Central Division really is not going to be fun for Chicago.

It really is a shame that the Canadian border is closed, because if the Blackhawks could have faced some of our neighbors to the North, they might have had a better time playing against more porous defenses.