When the Chicago Blackhawks signed Swiss forward Pius Suter to a one-year deal last summer, it had a familiar ring to it: “The Blackhawks have signed the Swiss NLA Most Value Player.”

We’d done this before, just one summer prior with the signing of Dominik Kubalík.

So right out of the gate, the expectations from the Blackhawks community started to inflate around this new Suter guy. Kubalík didn’t make it easy on him, with a 30-goal season in 2019-20 and finishing third in rookie of the year voting.

Then the pandemic delays the NHL season, so Suter has to delay his NHL debut and goes back to Switzerland to play on loan with his old friends at ZSC Lions. He scores 10 points in 12 games in the NLA and NLB before rejoining the Blackhawks for training camp, so his scoring ability took no hit.

Now he finds himself a focal point for a depleted Blackhawks roster. He’s been thrown into a second-line center role and is playing on the second powerplay unit in his first game in the NHL, against the defending Stanley Cup Champions. Seems simple enough.

“I expected a hard game, especially with less time on the smaller ice than I’m used to,” Suter said in a zoom call with the media on Friday. “It [first game] was kind of what I expected or what I hoped it would be, so I feel more confident now going into game two than I did maybe two days ago.”

Suter is going to be tested early and often with the Blackhawks because he is going to see a lot of ice time and will have more responsibilities given the amount of injuries with which Chicago is dealing. Had this been a normal season without injuries or illnesses, Suter likely would be playing for a third-line role, or even fighting for a roster spot to stay off the taxi squad or out of the AHL.

But he comes into the season as if he’s already a veteran player.

Pius Suter with a scoring chance in his #NHL debut. #Blackhawks pic.twitter.com/yGIDWrBcZY

At 24-years-old, Suter isn’t a typical “rookie” coming into the league. Much like Kubalík or Artemi Panarin before him him, Suter has five full seasons playing in professional leagues in Europe already under his belt. But unlike his time in the Swiss league, this is a whole new schedule and experience in the NHL

Suter is used to a similar amount of games being played this season, comparing his NLA schedule to the NHL’s shortened schedule for 2021. But the travel will be a challenge: “The back-to-back-to-back, that’s a bit new. I’m used to more Tuesday, Friday, Saturday. The flying is the biggest difference, not having to bus to games, but to have to get on a plane. I’ll have to get used to that.”

For reference, look how small Switzerland is: 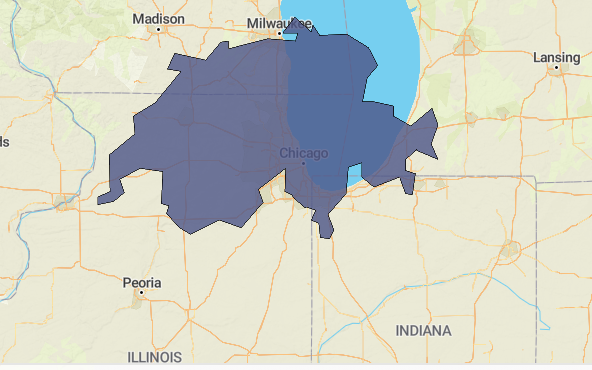 I think WGN TV’s signal strength is larger than that.

Through two games with the Blackhawks, Suter has clearly shown he belongs on NHL ice. He’s created a few chances, even though he has yet to finish one off. On Friday night, Suter led all forwards with 18:49 minutes played and it likely won’t be the last time he leads the Blackhawks forwards group on the ice.

Pius Suter, who is playing in his second #NHL game, with a shot between his legs in front of the net. #Blackhawks pic.twitter.com/QlLxmFQ9Zb

His contract is the epitome of a full NHL tryout: one-year, less than $1M. If he nails his audition, it’ll be very interesting to see what Chicago would decide to do with him heading into the future. For what it’s worth, if he pans out like any of the other European gems the Blackhawks have found like Kubalík, Panarin, Dominik Kahun, or even Michal Kempný, he should be looked at as part of the rebuild process.