The Rockford IceHogs, American Hockey League affiliate of the Chicago Blackhawks, begin their AHL training camp this afternoon in Rockford. The season is set to begin on February 5 with the IceHogs hosting the Cleveland Monsters. On Monday morning, the team released their 30-man roster for training camp comprised of 18 forwards, eight defensemen, and four goaltenders, including former Chicago Blackhawks Stanley Cup winner Scott Darling.

The IceHogs signed veteran goaltender Scott Darling to a professional tryout agreement. The Newport News, Virginia, native enters his 11th professional season including 126 NHL contests with Chicago and Carolina, earning 54-42-18 record with 2.72 career goals-against average and .908 save percentage. In 2015, Darling was a member of the Blackhawks’ Stanley Cup Championship appeared in 26 games with the IceHogs that same season, earning a 14-8-2 record, 2.20 goals-against average and .927 save percentage.

You can find the full roster here: 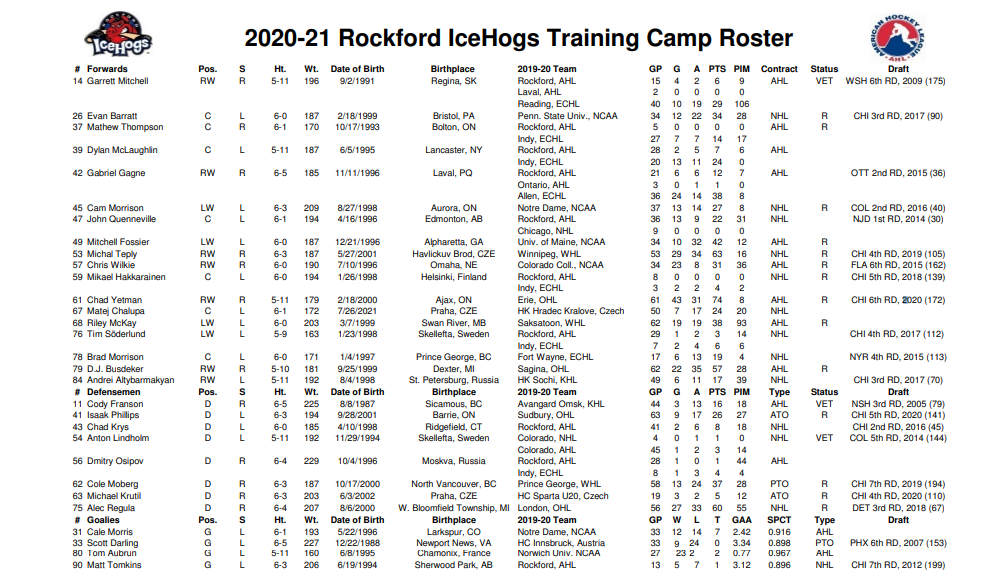 Some names that will be of interest to Blackhawks fans looking towards the future of the organization:

•   Evan Barratt – A college standout at Penn State, Barratt tallied 39 goals and 95 points in 98 career NCAA games. He missed Blackhawks training camp with an injury, but is expected to be a central player for the IceHogs forwards group to begin the season.

•   Michal Teply – After an impressive first season playing in North America last year with the Winnipeg Ice in the WHL, Teply makes the jump to the professional ranks with Rockford. With a good mixture of size and skill, if Teply can put it together consistently with the IceHogs, we could see him make the jump to the NHL sooner than expected.

•   Andrei Altybarmakyan – Making his first appearance in North America after playing parts of the last three seasons with HC Sochi in the Russian KHL, Altybarmakyan is a two-way winger who has demonstrated scoring pop at the Russian minor and junior levels. His transition to the smaller North American ice will be interesting to keep an eye on.

•   Alec Regula – Acquired from the Detroit Red Wings in the Brendan Perlini trade, Regula was a two-way leader from the blue-line with the London Knights in the OHL the past three seasons. He led all OHL defensemen in goals (22) during the 2019-20 season and helped the Chicago Steel win the Clark Cup in the USHL in 2017. Smooth skater for his size (6’4″, 207lb) and can generate offense.

•   Cale Morris – Another college standout, Morris was arguably the best goalie in the Big Ten Conference the last three years with Notre Dame. In three NCAA seasons as the Irish starter, Morris held a 58-35-11 record with a 2.18 GAA, a .931 save-percentage, and recorded 11 shutouts. He also holds a laundry list of NCAA awards including being a two-time Big Ten conference champion, two-time Big Ten tournament MVP, the 2017-18 Big Ten Goaltender and Player of the Year, the 2017-18 Mike Richter Award winner (Top NCAA Goalie), and a 2017-18 Hobey Baker Award finalist (Top NCAA Player).

A number of names at camp will be familiar to IceHogs and Blackhawks fans. Along with Scott Darling, the IceHogs welcome back defenseman Cody Franson to the team. Franson was a key part of Rockford’s 2018 Calder Cup Playoff run and joins the team on an AHL-only deal this season. John Quenneville, Chad Krys, Gabriel Gagne, Tim Söderlund, and goaltender Matt Tomkins are also notable returns to the IceHogs roster to begin this season.