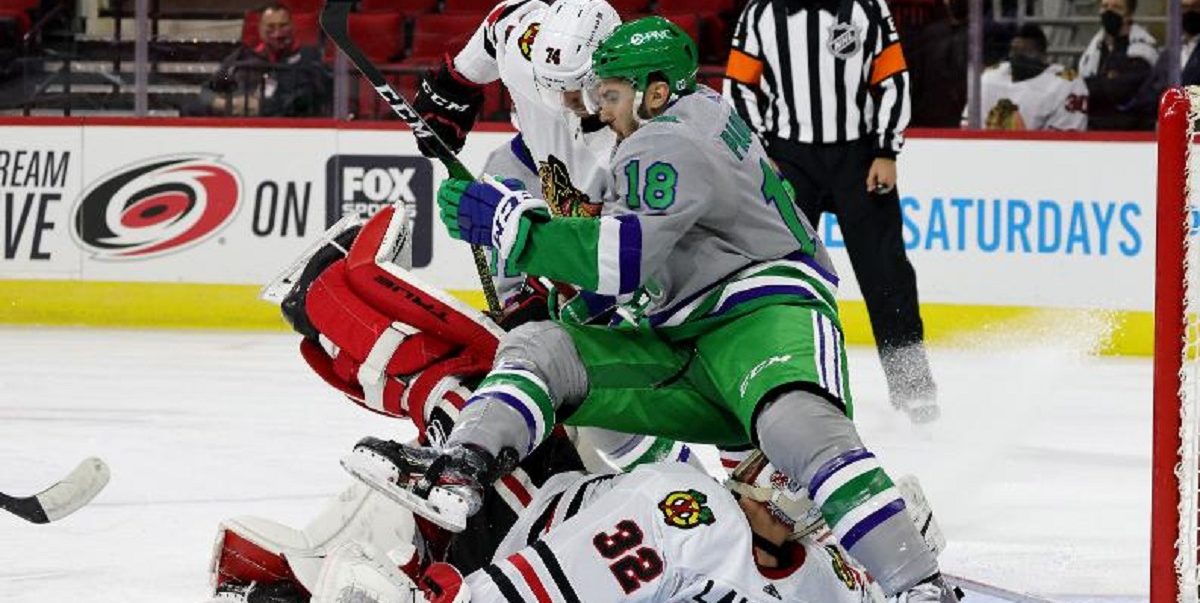 Not every game can be a banger. The Chicago Blackhawks fall 5-3 to the Carolina Hurricanes tonight in their third meeting of the season. Tonight was the first loss by more than one goal for Chicago since their third game of the season (a 5-2 loss to the Florida Panthers). They are now 1-1-1 against Carolina … or should I say the Hartford Whalers?

Okay, but for real, these Whalers Reverse Retro sweaters are bad. I know every hockey fan over the age of 30 suddenly can’t get enough of Hartford Whalers nostalgia, but these suck.

These kind of suck. pic.twitter.com/BePf2gYqkN

Unfortunately, the team that looked better on the ice, didn’t play better on the ice. With Saturday’s game postponed, I was hoping to see more of a full-speed 60-minute effort from the Blackhawks. They didn’t string that kind of performance together.

It was refreshing to see the comeback effort from Chicago late in the second period. It was part of their inconsistency tonight, but the upswing in the middle frame showed the resiliency of this squad. Also, Patrick Kane is so gross:

Ian Mitchell was able to add his second goal of the season to tie the game 2-2 heading into the third period. It was a spirited comeback that was quickly thwarted by the Hurricanes with two goals on the powerplay in the third period. Chicago came into this game having killed 19 of their last 21 penalties, they were 2-for-4 tonight.

Even though he losses the game tonight, Kevin Lankinen had a number of moments where he came up huge for the Blackhawks and kept them in this one. His record moves to 7-3-3 on the season after making 33 saves on 37 shots faced. This was the eighth time this season that the Blackhawks have allowed 35 or more shots against them. The Blackhawks are now off for three days before heading to Columbus to take on the Blue Jackets for their third two-game mini-series of the season.

•   The Blackhawks have trailed entering the third period five times in 19 games this season. Three of them were in the first three games of the year.

•   Special teams have carried the Blackhawks a long way this season. They were 8-for-25 on the powerplay since February 2nd heading into tonight’s game, but went 1-for-4 in the game tonight. On the penalty-kill, Chicago had killed-off 19 of their last 21 penalties, but were 2-for-4 tonight.

•  Patrick Kane tallied a goal and two assists tonight. He has 26 points in 19 games this year and has eight multi-point games this season.