Playing for Pride, Connor McDavid on Another Planet, and Other Blackhawks Bullets Skip to content 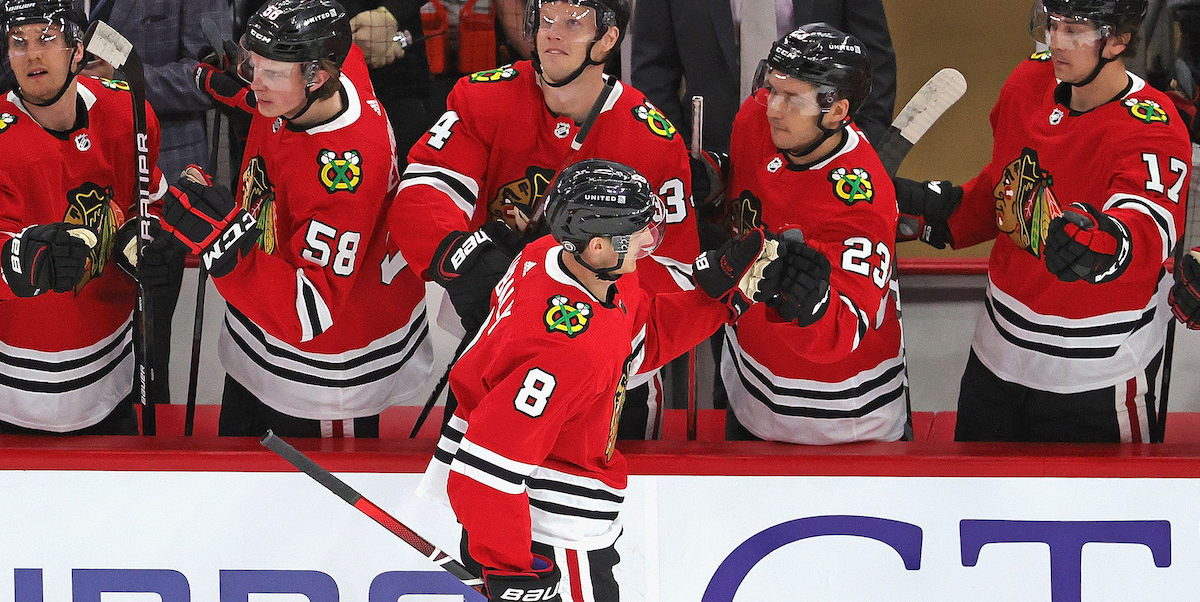 With a win over the Carolina Hurricanes on Saturday night, their first of the season, the Nashville Predators have locked up the fourth and final spot in the Central Division playoff picture, eliminating the Dallas Stars with two games remaining in the season.

The Stars come to Chicago to take on the Blackhawks today and tomorrow to close the season for both teams and will also serve as the first and only two games of the 2021 schedule with fans at the United Center. While it will be an awesome energy in the building, there will be very little for the teams on the ice to battle for.

There are two AHL dual affiliations that will have their NHL parent teams matching up in the first round of the Stanley Cup Playoffs.

•   Even though the Blackhawks have a 4-2-0 record over Dallas, they have been outscored 17-14 in the six meetings, with the two regulation losses coming by a combined scored of 11-2.

•   Chicago will be welcoming fans back to the United Center tonight for the first time since March 11, 2020. It’s going to be great to finally hear real fans cheering, booing, and yelling “shoooooot!” from the upper decks.

•   Although the teams will not be battling for playoff positions, the Blackhawks healthy enough to play in the final two games still have a good amount to play for. Most of them will be rookies. Duncan Keith, Brett Connolly, Calvin de Haan, Ryan Carpenter are all out along with Kirby Dach and Adam Boqvist.

•   Chicago has seen nine rookies make their NHL debuts this season, most recently with defenseman Alec Regula. It appears that the Blackhawks could make it an even ten rookies making debuts with their latest roster move. On Sunday morning, the Blackhawks recalled Evan Barratt to the Taxi Squad from the Rockford IceHogs.

•   The young players of this Blackhawks season have shown that they can play in the league. Although none of them seem to be franchise-changing players, the collective of rookies to step into the NHL this season and relatively all “swim” is an encouraging sign. Along with the steps forward from Dominik Kubalík and Adam Boqvist in their second NHL seasons, there’s optimism for the next wave of talent within the organization.

•   The key is adding to this next wave. The Blackhawks cannot be satisfied with the crop they have now, because it’s not good enough to get them over the hump and make them not just playoff contenders, but Stanley Cup contenders. President of Hockey Operations and General Manager Stan Bowman has expressed the need to find impact players to supplement this new group of players. With the amount of cap space the Blackhawks have to work with this offseason, finding that impact player could come via trade, free agency, or they may find it in the NHL Draft, which will be unique to any draft before it.

•   I’m not ready for the Blackhawks season to be over, but at the same time I am. We’ve seen enough of this club to know what they are and what they lack. But I will be missing them as the summer goes on.

•   It appears that head coach Jeremy Colliton is ready for this season to be over too, for different reasons though. Colliton’s family stayed in Canada for the season and with the border restrictions, he hasn’t been able to see them all season. That’s a rough time, no matter what you think of Colliton as a coach.

Jeremy Colliton's family stayed in Canada during the season.

Colliton on reuniting with his family after the season: "Good to see the kids, reintroduce myself. My wife, too. Hopefully, she still likes me." #Blackhawks

•   Speaking of restrictions, if you missed it yesterday, it appears that the NHL will be loosening restrictions on teams that are fully vaccinated for the Stanley Cup Playoffs.

•   You can tell Robin Lehner is excited for this news…

•   Around the NHL last night, we saw one of the best American-born goalies in NHL history play his final game. Ryan Miller played in his 796th career NHL game, 18th-most all-time, in a 4-3 overtime loss against the Minnesota Wild.

Ryan Miller gets a standing ovation in his final NHL game. 👏 pic.twitter.com/Pk6mSfUpoe

•   A very emotional moment and night for Miller, his parents in the stands for their son’s final game.

Ryan Miller shares an emotional moment with his parents after his last NHL game. 🧡 pic.twitter.com/mEqAYk6Bkq

•   I don’t care how old you are, that’s a heart-breaking scene. Miller had an incredible career and we wish him the best in his life after hockey.

•   While he’s not calling it a career as far as coaching goes, it appears that Blue Jackets head coach John Tortorella will not be returning to the team after this season.

Blue Jackets coach John Tortorella has informed the club he will not return when his contract expires this summer, sources told The Athletic on Saturday.https://t.co/2F6ZMcnrP7

•   After six seasons with the Blue Jackets and four Stanley Cup playoff appearances, the collapse that Columbus went through this season was enough to send Tortorella out the door. He likely will not be long without a head coaching job in the NHL, because that’s just how it goes in this league.

•   Finally last night in the NHL, Connor McDavid reached 100 points on the season. He’s a freak.

•   29 points in his last ten games for McDavid would rank him fourth on the Blackhawks in points FOR THE SEASON.

•   McDavid leads the NHL in points, obviously, by a 21-point margin over his teammate Leon Draistaitl. Third-place in the NHL in scoring is a tie between Brad Marchand and Mitch Marner at 67 points. McDavid has 68 assists this season.

•   Let me repeat that, McDavid has MORE ASSISTS than the guys in third-place in the league HAVE TOTAL POINTS.

•   If he’s not the unanimous winner of the Hart Trophy as league MVP, those who didn’t vote for him should have their voting privileges revoked for life.

•   That’s all for today. Have a good Sunday and a Happy Mother’s Day!