Remember where you were tonight six years ago?

Remember what you felt on this day six years ago?

On June 15, 2015, the Chicago Blackhawks and Tampa Bay Lightning squared-off in Game Six of the Stanley Cup Final at the United Center in Chicago. Holding a 3-2 series lead, the Blackhawks had the opportunity to do something that was almost unthinkable in the new salary-cap era of the NHL: Win their third Stanley Cup in a six-year span of time. Having already captured Stanley Cups in dramatic fashion in 2010 and 2013, the Blackhawks and fans were hoping not to have to sweat it out as much, or worse, have to face a Game Seven back in Tampa.

I remember everything about that day.

It was a Monday. I was working at the time for Sports Radio 105.7 fm “The Fan” in Milwaukee as a radio producer on the morning drive program. I was living with my girlfriend (now my wife) in Waukegan and had to work that morning. I was up at 3:30 a.m. to make the drive up to Milwaukee and work from 5 a.m. to noon.

I wore my Patrick Kane sweater all day, and in a Milwaukee sports radio station, wearing anything Chicago-based was like wearing a bullseye. But a Blackhawks sweater was different, especially when it came Stanley Cup Playoff time. No one gave me grief, except one Detroit Red Wings fan in the building. But following the work day, I drove to Jack Andrea’s Cafe in Kenosha to grab a few cigars for later that night, just in case.

I drove straight from Kenosha down to Chicago in the afternoon. The game didn’t start until 7:00 p.m. that night, but I arrived early to make sure that I could get to the bar where me and my wife and friends had planned to watch the game and get a table. We were going to Pitchfork Saloon on Irving Park, which is now sadly closed. It was the same bar that in 2013 we watched the Blackhawks score two goals in 17 seconds to steal the Stanley Cup from the Boston Bruins. Figured we’d have the same luck going there again for another Game Six. 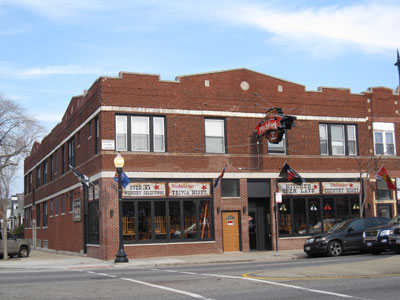 By the time I had got to the city, there was a storm rolling in and it was going to be pretty severe. I parked may car where I knew I could get free parking and started to walk to the bar. Little did I know just how fast the storm was coming. It started to rain, then monsoon shortly after I started walking. I had to sprint through the rain to get to the bar and not be caught in the rain any longer than I had to. I got to the bar and got inside, thankfully the staff had a towel the could borrow to me to dry off.

I waited for my friends to show up and the game to start, we sat at a table near the bar and a few of us spilled over and sat at the bar. That’s where I planted myself for the next five hours.

Watching the game unfold, there was a sense in that this was going to be maybe the most stressful sporting event I had ever watched, maybe even more than in 2013. The back and forth nature of the first two periods provided so many moments where I though either team could break through. Thankfully for Chicago, Corey Crawford decided to put in one of his best performances in the postseason in his career.

Then, late in the second period, Duncan Keith came through roaring like a lion.

I don’t think I’ve screamed any harder than after Keith’s 1-0 goal. If you watch the replay of Keith’s celly after the goal, that was pretty much me too.

Heading into the third period, up 1-0, 20 minutes away from watching the Blackhawks win their third Stanley Cup in my lifetime, I was a wreck. I barely said anything with our friends during the intermission. It would be another nearly full period of anxiety and waiting for the shoe to drop, I kept thinking, “there’s no way I’m going to be blessed enough to see them do this three times without having to go through more anguish. Tampa’s going to tie it, I know it.”

Then, with just about five and a half minutes to play, the deal was sealed.

I broke my hand banging it on the bar after Kane buried the 2-0 goal. Really, it was swollen for about a week or two after that night. But with the adrenaline, and beer, running through me, I couldn’t care less about the pain. That was it. Surely, they’ve done it a third time.

The cigars I bought, somehow still dry in my pocket from the rain before, were lit and the party in the streets of Chicago began. People cheering, people dancing (myself included), cars honking their horns as they drove by with Blackhawks flags hanging out the window. It was a city, if just for one more summer, that was owned by the Blackhawks.

The City of Chicago were champions again thanks to the Blackhawks. We partied in the rain through the night, bar hoping (safely) across the north side of town. Unfortunately I couldn’t try my luck at following the Cup around town because I had to be in Milwaukee in four hours for work. Needless to say, that was not my best day of work, but it was so G-D worth it.

Fast forward to today, six years since that night where Duncan Keith, Patrick Kane, and Corey Crawford led the way to the third Stanley Cup of the “One Goal” era of the Blackhawks, it remains the last time that Chicago has won a Stanley Cup Playoff series. We’re not counting the play-in round from summer 2020. After being ousted in seven games by the St. Louis Blues in 2016 and then swept by the Nashville Predators in 2017, the Blackhawks have become a shell of what they once were, holding onto the memories of the modern-day dynasty Blackhawks.

Since June 15, 2015, Marian Hossa, Andrew Shaw, Patrick Sharp, Corey Crawford, Brent Seabrook, Bryan Bickell, Kris Versteeg, Scott Darling, and Michal Rozsival have all retired. With many others having their time in the NHL winding down, or over altogether. Joel Quenneville and John McDonough are gone as well. It’s a very, very different look for the Blackhawks now six years removed.

Do I trust that they will be, one day, back at the top of the NHL? Of course. If I didn’t have that optimism, why would I watch sports? But it feels much different now than it did back in 2005, 2006, and 2007 when the major parts of the modern-day Blackhawks dynasty were being put in place. There was a hope and optimism surrounding the entire franchise when players like Jonathan Toews and Patrick Kane were joining the organization, and Brent Seabrook and Duncan Keith were becoming stars for the team. There isn’t another Jonathan Toews or Patrick Kane on the way for the Blackhawks, not soon at least.

So how do they get back to the top? Hopefully it won’t take as long as it seems it will. But for now, for today at least, enjoy the memory of six years ago. I know I will.