Let's Do Our Own Blackhawks Mock Draft: Drafting the Goalie of the Future, Getting Bigger, Dach's Brother, More Skip to content

Now that the Seattle Kraken Expansion Draft is over, it’s time to turn our attentions to the next draft in line this offseason: The NHL Entry Draft.

The Chicago Blackhawks have eight picks in the 2021 NHL Entry Draft, with the 12th overall selection and three picks in the first two rounds. Blackhawks Scouting Director Mark Kelley had some jokes in his pre-draft presser on Thursday afternoon ….

Blackhawks scouting director Mark Kelley previewing the draft: "We know that Forfeiture is going in the top 11."

The Arizona Coyotes are forfeiting their first-round pick due to violations of the NHL scouting combine from last year’s draft. So they held the 11th pick, but will not be using it. The Blackhawks technically hold the 12th pick, and it is being called the 12th pick, but they will be selecting the 11th player in the draft. It’s all dumb and all the picks are off by one spot because of it.

In case you have missed it this summer, we have been doing NHL Draft Wishlist posts for players I feel like the Blackhawks should be targeting with their first-round selection. Here are the players we’ve profiled:

Luckily for me and it appears for the Blackhawks too, they feel like the top goaltenders in this year’s draft class (Jesper Wallstedt and Sebastian Cossa) are worthy of first-round consideration. As you’ll see, that would come into play in my mock draft.

He said Jesper Wallstedt and Sebastian Cossa are certainly worthy of a first-round selection. #Blackhawks

A few things I prioritized in this mock draft is the need for the Blackhawks to find a future top-tier goaltender, getting bigger and stronger in their prospect system, and landing impactful forwards for their prospects system since they already are pretty deep on the defensive side.

Without further ado, here’s how I drafted the Chicago Blackhawks 2021 NHL Draft Class… 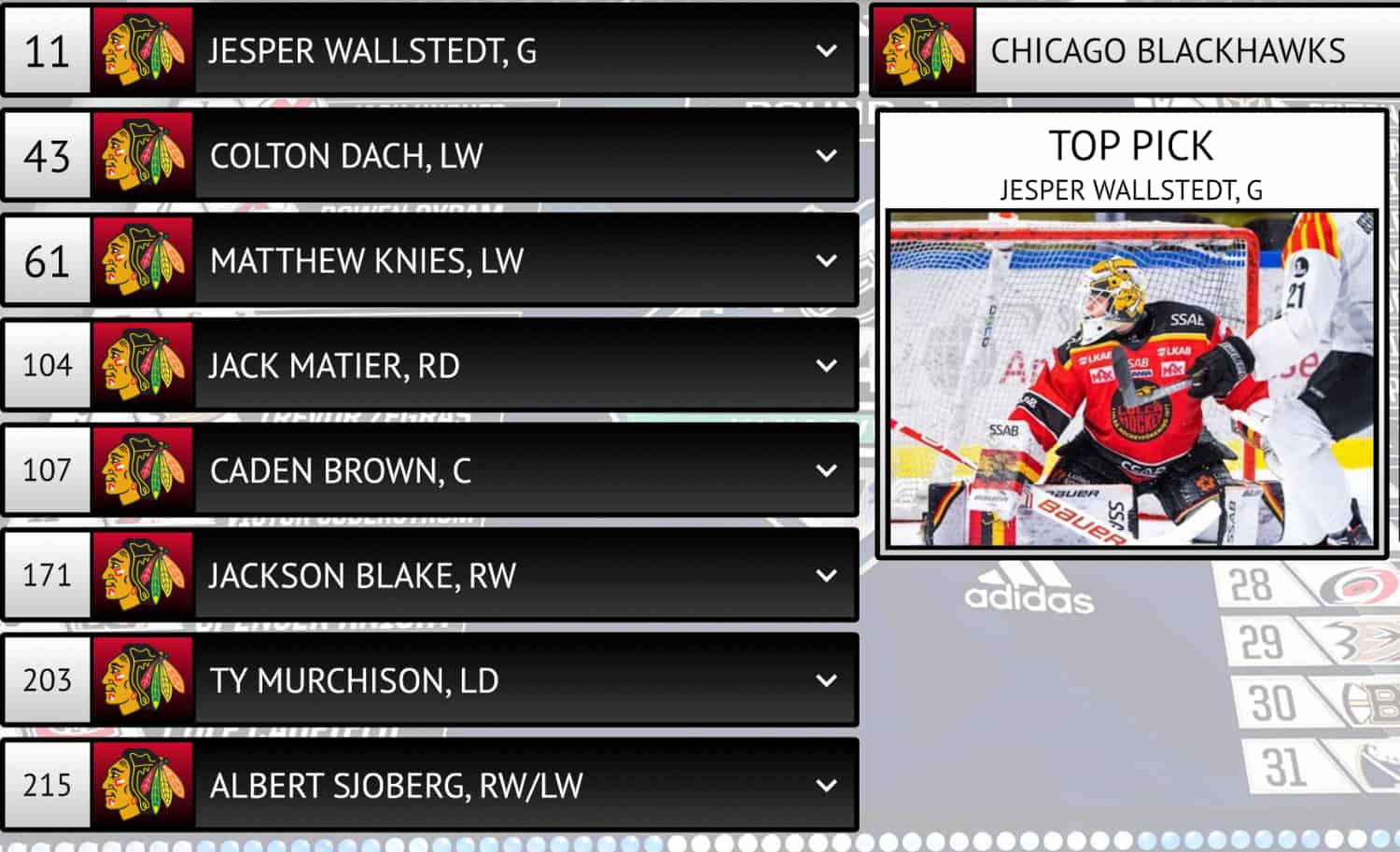 I was surprised to see Wallstedt fall to the 11th/12th pick in the draft simulation and was prepared to take McTavish, but he was selected by the Senators in the pick before mine with the Blackhawks. The team has indicated that their draft plan will likely be to select the best player available when their first-round selection rolls around. Whether it’s Wallstedt, or one of the top forwards available in the draft, there’s almost virtually no wrong pick for Chicago at their position in the first-round.

Wallstedt is regarded as the top goaltending prospect in the draft class, and some even have him listed as the best overall prospect in this draft. But there is hesitation around the league in drafting a goaltender high in the first-round. Last year, top goaltending prospect Yaroslav Askarov was a target for the Blackhawks at 17th overall, but he didn’t fall that far. This year, I get the feeling Wallstedt, if available to Chicago, will end up being the selection.

He’s has solid size at 6’3″ and 210 pounds, his athleticism is what puts him at the top of the goaltending list in the draft class and he has already had experience playing professionally in the Swedish SHL last season. Chicago has Dominic Basse and Drew Commesso already in their prospect system at the goaltending position. Both had good first seasons in the NCAA last year, with Commesso looking like a future potential starter in the NHL. While Commesso looks good, Wallstedt looks great. Having a potential future 1-2 punch in net of the two would set the Blackhawks up nicely for a long time in-between the pipes.

This is a pick that is half about his size and skill and half about the marketing aspect of having the Dach brothers in Chicago. Colton is a sizable power forward at 6’4″ and 200 pounds, just like his brother, but has a skillset that makes him more of a goal-scoring power forward than Kirby, who is more of an all-around/play-making power forward type. Chicago needs size and skill upfront and the younger Dach adds to that in their prospect system. He’ll likely be a high-scoring monster in the WHL with the Saskatoon Blades next season.

Copy and paste what I said about Colton Dach for Matthew Knies.

He’s a goal-scoring power forward that has been consistent at the USHL level with the Tri-City Storm. At 6’3″ and 205 pounds, he again adds significant size and skill to the future of the Blackhawks prospect system. Knies is headed to the University of Minnesota next season, where he’ll have to learn the game at a higher pace in the NCAA.

At 6’4″ and 205 pounds, Matier is a physical defenseman that uses his size and reach to get the puck off of his opponents stick and uses his body positioning to get into shooting/passing lanes. He’s a good skater for his size, from all accounts, and even though he missed his entire OHL season in his draft year, Matier skated with Team Canada at the U18 World Junior Championships, helping the Canadians win Gold.

My first pick that is under six-foot tall, but it’s for good reason, I swear.

Brown is headed to the University of Wisconsin, so that’s the first positive in his favor. He’s not going to blow many people away with his skating and shot, but they are at a high enough quality after his past two seasons in the U.S. Development Program that he can step into the Badgers lineup at the NCAA level and likely become one of their top contributors. He’s young for his draft class, having just turned 18-years-old a month ago, so he still has plenty of time to go down developmental path.

Hey, there has to be at least one player form the Chicago Steel, right?

Blake is still 17-years-old, so like Brown before him, he has a long way to go down his developmental path. He split last season playing at the prep level with Eden Prairie, a hockey powerhouse in the Minnesota High School system, and with the Chicago Steel in the UHSL, helping them win the Clark Cup. Blake dominated at Eden Prairie, with 20 goals and 58 points in 19 games at the prep level, helping them win the Class AA State Title.

At 5’10” and 150 pounds, He has time to physically mature still and will get a second season with the Steel under his belt next year before heading to the University of North Dakota for the 2022-23 year.

Ok, back to adding size on the blue-line.

Another product of the U.S. Development Program, Murchison is a sizable defenseman at 6’2″ and 195 pounds and uses his size to his advantage. Much like Matier, his best attributes lie in how he uses his frame to his advantage. He skates well for his size, by all accounts, and was part of Team USA’s roster for the U18 World Junior Championships this past Spring. He is headed Arizona State next season, where he’ll likely have to hone his other skills besides being physical at the NCAA level.

Can’t finish the draft without adding another European prospect.

The Blackhawks do a great job canvasing the European hockey scene to find not only professional prospects, but also in the amateur ranks. The pandemic obviously made overseas scouting difficult this past year and most of it was done through game film, rather than in-person viewing. That’s why I feel like this will be a draft year where the Blackhawks may end up picking more domestic players than usual.

Sjöberg has decent size, straight-line speed, and goal-scoring ability, and is actually ranked much higher than a seventh-round pick by most major scouting publications, so it’s likely he won’t fall this far. He scored 10 goals and three assists in 18 games at the Swedish U20 level last season with Södertälje SK and also skated in 17 games in the Swedish second-tier professional hockey Allsvenskan league. Not dynamic on his feet or with his hands, but what he does (skate fast, shoot hard) he does well.

We will see how things shake-out on Friday and Saturday as the NHL Entry Draft first round gets underway on night one, with rounds two through seven happening on night two. The broadcasts can be found on ESPN2 for night one and on NHL Network for rounds two through seven in the United States. Again, this was how I would draft for the Blackhawks this year, not exactly how I think they will draft. There is likely going to be a lot of movement over the next few days that will impact who and where the Blackhawks draft this weekend.

We’ll have all the news and updates as the week continues.