Blackhawks Having A Bowl Of "Salary Cap'n Crunch," Free Jack Eichel, and Other Blackhawks Bullets Skip to content 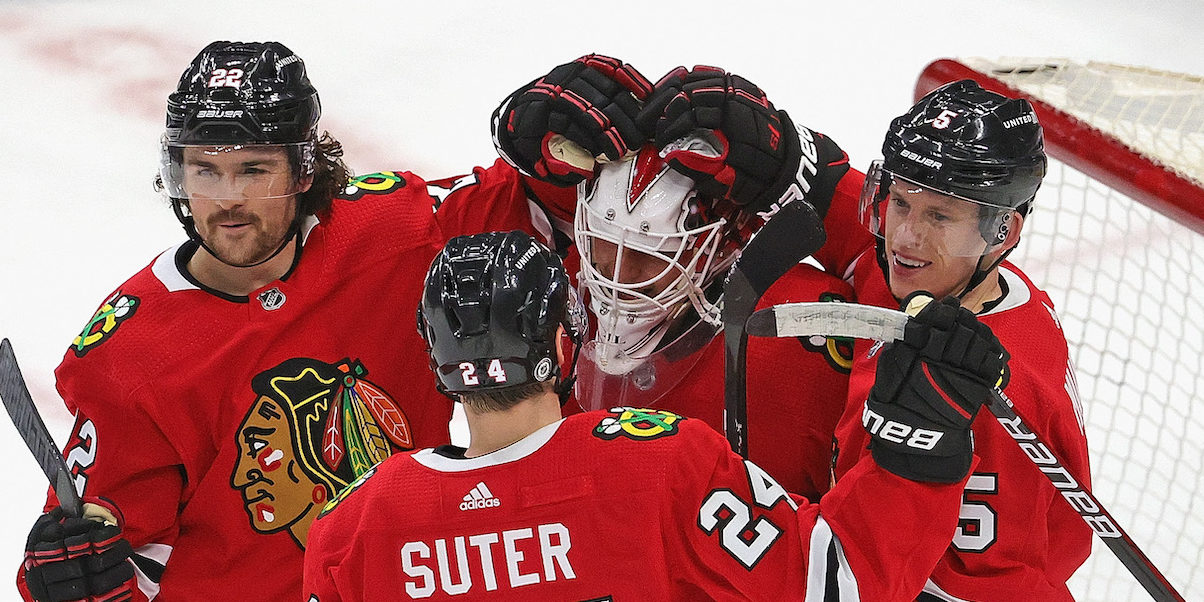 So we’re just in a state of limbo now? The Chicago Blackhawks had a big week last week with the NHL Draft and beginning of free agency. Landing Marc-Andre Fleury and Tyler Johnson, and adding Jake McCabe and Jujhar Khaira in free agency, added to the Nikita Zadorov trade and the Blackhawks are heading in a brand new direction after their one-year “rebuilding” process. They have Seth Jones now and Jonathan Toews is expected back. So what now?

Here is how the WAR roster builder projects the 2022 NHL standings after two days of free agency. pic.twitter.com/2EdHra8aRN

•   Just a few weeks ago, the Blackhawks were projected to finish dead-last, and not even close to seventh-place, in JFresh’s model. It’s amazing the kind of turnaround that Chicago has seen, IF they are going to get the best of Fleury and Toews and company.

•   The additions of Fleury and Johnson are hefty on the Blackhawks’ salary cap situation. If Fleury doesn’t play, things get a bit easier to navigate, but that also makes the team, on paper, less competitive. The Athletic’s Scott Powers took a dive into the salary cap situation for the Blackhawks for the next few seasons after it went from “look at all this space they have” to “cap crunch” almost overnight.

Assessing the Blackhawks' salary cap over the next five seasons https://t.co/lgIUil9k6i

•   One of the reasons the Blackhawks are going back into the “cap crunch” realm is because of the addition and extension of defenseman Seth Jones. While Jones is expected to make the Blackhawks more competitive on the ice, getting to know the newest member of the team off the ice is important as well. Blue Jackets writer Aaron Portzline of The Athletic offers up this piece on Jones outside of being a hockey player, and tells of his love for art.

If you want to know more about Seth Jones’ life off the ice … I wrote this a couple of years ago on his passion as an art collector. Really enjoyed talking to his artist friends.

•   The other big addition this offseason with significant salary cap implications is Tyler Johnson. A middle-six forward option, Johnson is a far-cry from his breakout 2014-15 season with the Tampa Bay Lightning, when he finished tied for the team-lead in points (72) with Steven Stamkos and helped propel the Lightning to the Stanley Cup Final against the Blackhawks, with 23 points in 26 postseason games. Granted, since that 2014-15 season, the Tampa Bay Lightning have built a juggernaut of a team and Johnson’s role has slipped down the depth chart. As Ben Pope of the Chicago Sun-Times points out, Johnson is expecting more responsibility with the Blackhawks and a chance to prove he can still be one of the go-to players for an NHL franchise.

When the Lightning raced to the 2015 Cup Final, Tyler Johnson was one of their integral players.

As he now joins the Blackhawks team that eliminated them that year, Johnson is ready to re-earn that kind of large role.

•   The Blackhawks would GREATLY benefit from having a veteran forward like Johnson mesh well with the young group of forwards looking to take steps forward from last year to this year. If he can find a home in the middle of the lineup, Johnson could add to the games of players like Henrik Borgström, Brandon Hagel, and Philipp Kurashev.

•   A Happy Blackhawks Birthday to NHL veteran of 915 games (688 with Chicago) and Blackhawks radio broadcaster Troy Murray, who turns 59 today!

•   In news around the league, a big bombshell was dropped late last night. Peter Fish and Peter Donatelli, the agents for Jack Eichel, released a statement on his behalf last night, calling out the Sabres’ handling of Eichel’s neck injury and accusing the team of stopping the 24-year-old from continuing his NHL career.

A statement from the agents of Sabres captain Jack Eichel: pic.twitter.com/9vyY4albk2

•   The Buffalo-Eichel saga is getting worse and the two sides couldn’t feel more toxic to the other. Eichel wants out of Buffalo and the Sabres won’t be able to get him to play for them. Why is a trade taking so long? Well, when you are asking for the equivalent of four first-round values for a player who needs a neck surgery, you are asking for too much.

•   In an incredible case of perfect timing, the “31 Thoughts Podcast” with Jeff Marek and Elliotte Friedman just had one of Eichel’s doctors on the podcast to discuss the situation. It’s a fascinating listen. Highly recommended.

New 31 Thoughts podcast:
This is an interview we’ve chased for awhile. Dr. Chad Prusmack is part of Jack Eichel’s medical team. He explains to us why Eichel desires a disc replacement and gives insight into the potential procedure. https://t.co/Y1zxsR4CrE

•   Speaking of trading superstar players, yesterday was a rough day for the Chicago Cubs and for our friends here at Bleacher Nation. I am admittedly not a Cubs fan, but even I could see how and why the trades of Javy Baez, Kris Bryant, and Anthony Rizzo, along with others in the past few days, hit the fans hard. As I watched the news break and the outpouring of emotions online, I could only think what I would have felt, had the Blackhawks traded Duncan Keith, Patrick Kane, Brent Seabrook and Jonathan Toews following the 2016-17 season, just a few years removed from the glory of three Stanley Cups in a six-year span. The city of Chicago had a rough one yesterday.

Crossover content that is relevant today. Thank you for everything these guys have done for the city of Chicago! #BaseballTweet (Javy too, just couldn’t find a #Blackhawks picture of him) pic.twitter.com/vee7o3yjT2

•   That will do it for today. Get outside and enjoy your weekend!