Hey! Let’s open ourselves up to being very wrong about something, what do you say?

The Chicago Blackhawks are not too far off from the beginning of training camp for the 2021-22 season. There’s not much left to do on the offseason checklist outside of signing Alexander Nylander to a new contract, as he is the last restricted free agent left for the club to sign.

Since the end of the 2020-21 season, the outlook for the 2021-22 has changed quite a bit. What was once a team asking the fanbase to be patient with a “rebuilding” process is now a team that looks to be using their own definition of “rebuilding” with a roster in transition that will be half going-for-it and half still-building-a -new-core-of-players.

Heading into the Seattle Expansion Draft, the NHL Entry Draft, and the beginning of NHL Free Agency, this was a very different Blackhawks team that had a very different feel to it. Life comes at ya fast.

With that in mind, and with the help of CapFriendly’s Armchair GM Roster Builder, here is how I predict the Blackhawks’ opening night roster will look like for the 2021-22 season …. 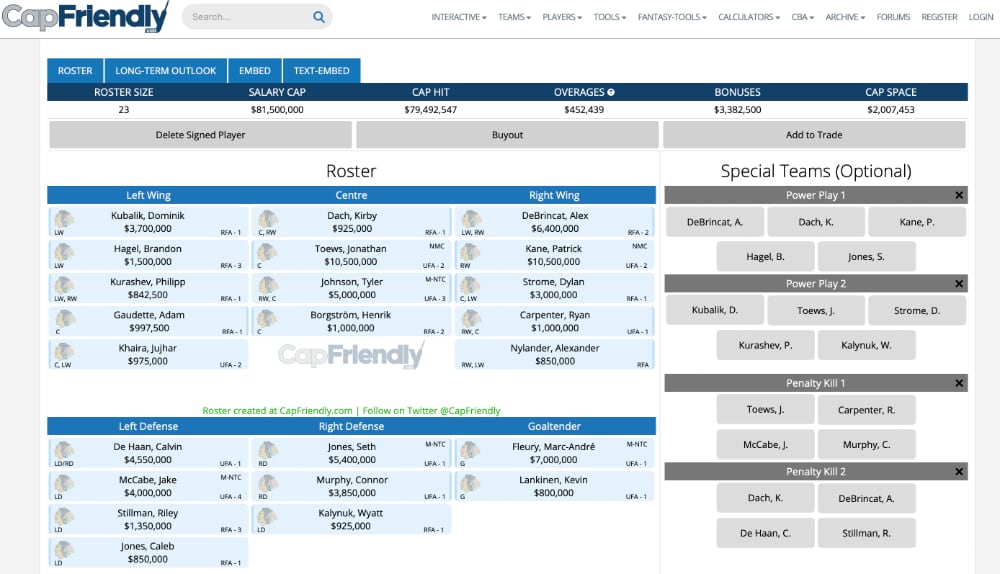 With a full 23-man roster, the Blackhawks would have just a few thousand dollars over $2M in salary cap space. This is also with a full 23-man roster that has Alexander Nylander on a one-year deal with a $850,000 cap hit, which is what I would think his deal would be after missing all of last season. Missing from the NHL roster is forward Brett Connolly. I chose to bury his $3.5M AAV NHL contract in the AHL with the IceHogs, cutting his AAV cap hit to $2.375M for the season.

The biggest change for the Blackhawks this season is on the blue-line. With the subtractions of Adam Boqvist, Nikita Zadorov, and Duncan Keith, along with the additions of Seth Jones and Jake McCabe, the defensive group in Chicago seems to be in a better position than last year’s far as responsibility and mobility.

It also helps that the goaltenders behind them will likely be better than last year’s rotation of “maybes.” With last season’s Vezina Trophy winner Marc-André Fleury and a breakout rookie last year in Kevin Lankinen backstopping the club, Chicago’s more stable defensive-minded group will (should?) get the Blackhawks out of the bottom of the league when it comes to shot suppression and goals-allowed per game.

The addition of Tyler Johnson and the return of Jonathan Toews, who is hopefully healthy enough for a full season, helps solidify Chicago’s lineup down the middle. After potentially having a 1-2 punch of Pius Suter and Kirby Dach, the Blackhawks have a decent rotation of options at the center position with Dach, Johnson, Toews, Henrik Borgström, Adam Gaudette, Philipp Kurashev, Dylan Strome, and Ryan Carpenter. The versatility of the forwards group will hopefully be an asset to the club and head coach Jeremy Colliton, rather than a detriment causing over-blending of the lines.

I’m optimistic for the Blackhawks’ forwards group as a whole. The mixture of veteran experience with the youth gives me hope that there will be at least one more young player who can step forward as a potential future building-block of the next core group of players in the organization. Kurashev, Borgström, Gaudette, and Brandon Hagel could be quality complimentary players to the top scoring options of the group like Toews, Dach, Patrick Kane, Alex DeBrincat, and Dominik Kubalík.

I chose to keep Nylander and newly acquired Jujhar Khaira on the roster as extra forwards over young players like Lukas Reichel, Mike Hardman, and MacKenzie Entwistle. Those young players, without the NHL Taxi Squad this season, would benefit from having significant minutes with the IceHogs in the AHL, over sitting in the press box in Chicago or playing limited minutes. Especially for Reichel, getting him acquainted to the North American game in the AHL could play out as a better scenario for him in his development than throwing him directly into the NHL.

Speaking of playing significant minutes in the AHL, defensemen Ian Mitchell and Nicolas Beaudin would be slated as two of the top four defensemen with the IceHogs in the 2021-22 season. Much like the young forwards group, it would be better for their development to get top-minutes in the AHL, rather than being a healthy-scratch or playing lesser minutes. These kinds of roster decisions come into play now this season, after previously figuring the Blackhawks would be a team investing NHL minutes into their young players, with the roster moves Chicago made this summer to be closer to a Stanley Cup Playoff-contending team.

For those wondering, with no NHL Taxi Squad this season, here is how I would construct the Rockford IceHogs’ lineup for the 2021-22 AHL season. Keep in mind, CapFriendly doesn’t track AHL-only contracts, which means no representation of players like Ryan Stanton, Garrett Mitchell, or Cale Morris…. 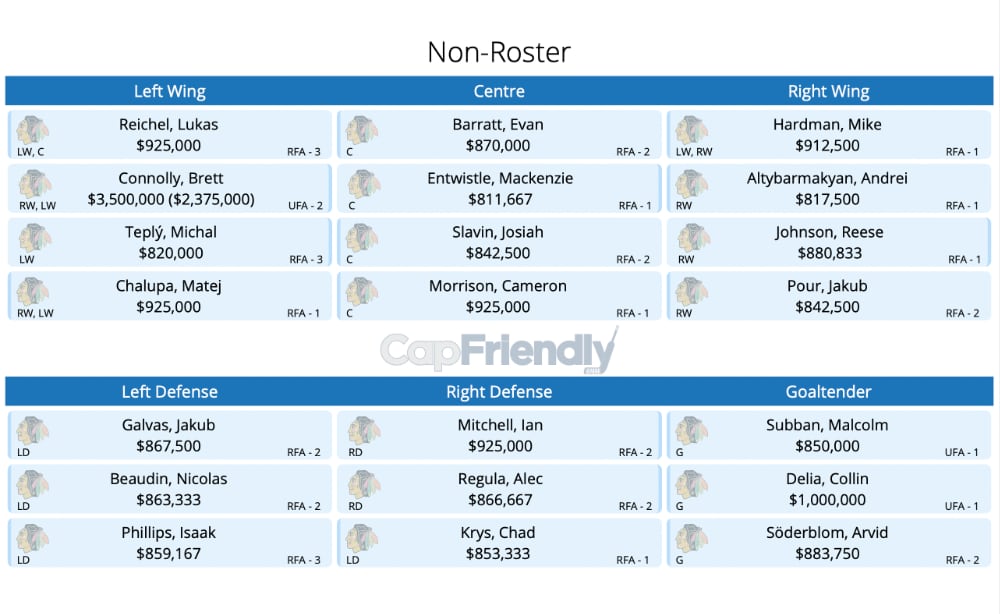 For what it’s worth, I am in love with this IceHogs roster.

This is all on paper, or rather a computer screen, for now. The Blackhawks did a lot to change the outlook of the 2021-22 season and went from a team that looked like they would be cellar-dwellers in the Central Division, to being a team that could realistically contend for a Stanley Cup Playoff spot.

Chicago hasn’t made a “real” postseason since the 2017 Stanley Cup Playoffs, which ended in a sweep by the Nashville Predators. With Marc-André Fleury here for one season, the addition of Seth Jones and Jake McCabe defensively, and the return of Jonathan Toews, this looks like a short-term Blackhawks team that could break that streak and “go for it,” at least for the 2021-22 season.

Beyond that, who knows?