For years, we have been talking about hockey prospects all wrong. Outside of a handful from each franchise, when we rank them in a numerical fashion from No. 1 to whatever, is there really that much difference in prospects No. 13. and No. 19 for example? Usually very much not.

So to avoid nonsensical arguments about Blackhawks prospects being ranked above or below other in these numerical rankings, I (not me) have come up with a system (not originally mine) to categorize hockey prospects that is a perfect (not perfect) way to rank them all.

Ok, this is an idea ripped directly from Sportsnet’s YouTube star Steve Dangle, but he said to take it from him, so I’m doing just that. If he has a problem with it, he can find me. You can find his original idea here, done for the Toronto Maple Leafs.

Without any further ado, behold the Prospect Pyramid! 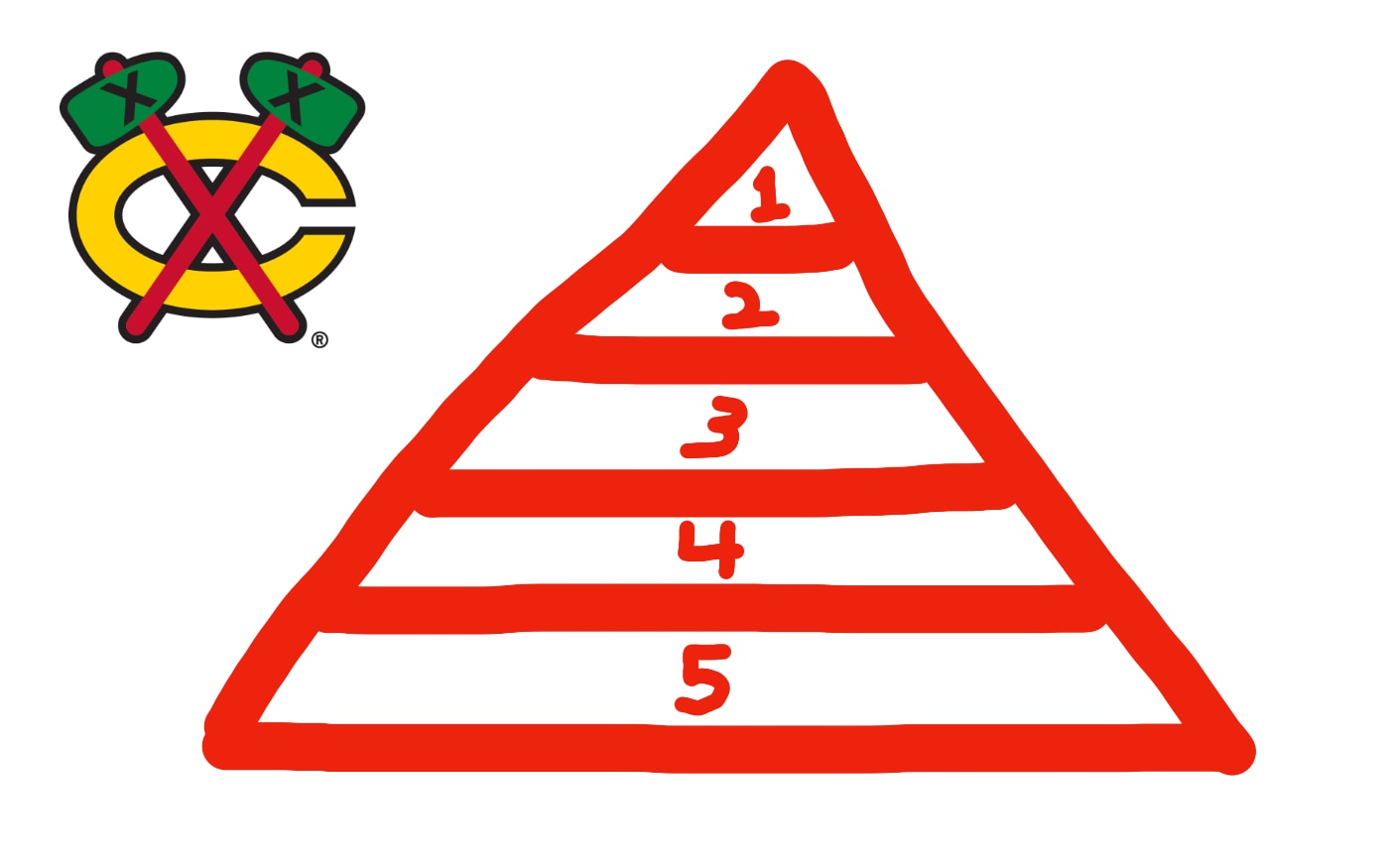 Clearly this is not a perfect way to go about it, and this is my ranking of the Blackhawks prospects, so it’ll be subjective if you want it to be. But here is how I see the different levels of the 2021 Blackhawks Prospect Pyramid shaping up:

This is a player that you look at and have zero doubts about their ability to be that top-line/top-pairing superstar player. Someone who you build an entire franchise around. Players like Patrick Kane and Jonathan Toews.

This is a player who may not be that “future Hall of Fame” type player, but someone who is going to be around for a long time and will have a big impact on your team. These are players that no successful franchise is without, like a Patrick Sharp or a Niklas Hjalmarsson.

These are players that don’t jump off the page as someone who is going to drive your team, but they make those small, timely impacts that can make good teams great. Think of Dave Bolland or Johnny Oduya.

This prospect level is good for players who have high expectations, but we don’t know much about them. Like if they have played in Europe or have had injury issues, for example. Players whose NHL aspirations may or may not pan out.

Level Five: Everyone Else

Like the title says, this is where everyone else lands. Usually, these are prospects and players that have unlikely futures in the NHL, or have not shown enough in their Junior careers to be excited about yet. These are just “guys.”

Now that we know the levels in which the Blackhawks’ prospects will land, I have to lay some ground rules for what is and is not a “prospect” in my terms. Again, this is my system and it is not perfect, but I make the rules and they are pretty simple:

I’ll split the breakdown of the pyramid over two posts, which you’ll see in the next few days as we get closer to the beginning of training camp and the preseason.