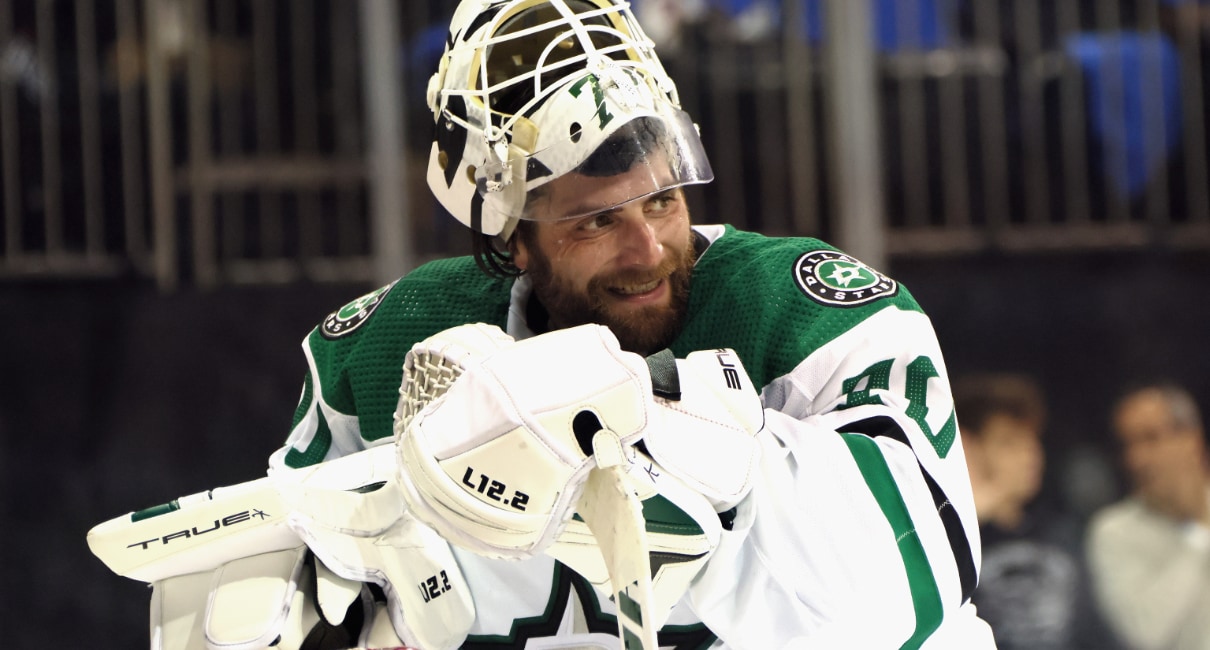 Someone do me a favor and get me whatever the heck Alex Ovechkin is eating/drinking because that guy is playing like he’s drinking from the fountain of youth at 36-years-old. Before we get to Ovi, though, let’s get into a night of historical marks and firsts for multiple players and teams.

•   Filip Forsberg scored four goals in a 6-0 romping of the Columbus Blue Jackets on Tuesday night in Nashville. The 27-year-old winger tied Rocco Grimaldi (March 25, 2021, vs. DET) and Eric Nystrom (Jan. 24, 2014, at CGY) for the Predators franchise record for goals scored in a game, according to NHL Public Relations.

The most wins by a goaltender in NHL history through his 500th game.

What a night for Braden Holtby! #TexasHockey pic.twitter.com/QR6w5tmGTC

•   Check out this series of saves by Holtby on Tuesday night:

BRADEN HOLTBY ARE YOU KIDDING?!? pic.twitter.com/o5LjXsiSQf

•   Holtby wasn’t the only one wearing a green sweater to have himself a night in the Stars’ 4-1 victory over the Carolina Hurricanes. Roope Hintz scored three of the four Dallas goals on the night, logging his first career hat trick in the victory.

•   Circling back to Filip Forsberg for a minute, one of his four goals helped the Preds score a pair of goals in nine seconds or less for the fourth time in franchise history.

The @PredsNHL scored two goals in a span of nine seconds or less for the fourth time in franchise history and second against Columbus (also Jan. 21, 2006, 0:08). #NHLStats: https://t.co/tW1wVK4QYd https://t.co/G47utDvtyK

•   If you think that’s cool, Tampa Bay would like a word with you:

Let's unpack this first period so far, shall we? pic.twitter.com/1riqvOExnq

•   Corey Perry and Erik Cernak scored five seconds apart to make it 3-0 Tampa Bay in the first period, the fastest two goals in franchise history for the Lightning.

•   Speaking of the Caps, let’s talk about Alexander Ovechkin for a minute here this morning. Ovechkin, 36, became the oldest player to score a hat trick for the Washington Capitals when he tallied a trio of goals on Friday night as Washington topped Florida 4-3.

Alex Ovechkin (36 years, 70 days) becomes the oldest player to score a hat trick for the Capitals.

•   Ovechkin has 19 goals and 18 assists (38 points) in 23 games this season and is firmly in the conversation for the Hart Trophy at the age of 36. Freaking wild. Ovechkin is on a 60-goal pace right now, and even if he slowed down a tick and scored 50 goals this season, he would end the season with 781 career goals. Which would put him 113 goals behind Wayne Gretzky for the all-time NHL record. If Ovechkin can continue to play at this level for the next two to three seasons, we could be talking about him becoming the NHL’s all-time goals leader before he hits 40.

•   The Caps might have topped Florida on Friday night thanks to the Ovi hattie, but the Panthers were the ones who stole the show on Tuesday night in the rematch between the two Eastern Conference powers.

The @FlaPanthers score four in the third to complete this amazing comeback!

•   The Panthers outshot the Capitals 27-2 in the third period and scored four goals to erase a three-goal deficit in a 5-4 victory over the Capitals. According to STATS, INC., The Florida Panthers are the only NHL team in the last 30 years to outshoot their opponent by 25 or more and outscore them by four or more in any single period. On the evening, Joe Thornton recorded his 1,533rd career point, tying Mark Recchi for 12th on the NHL’s all-time scoring list.

•   The New Jersey Devils and Jack Hughes have agreed on an eight-year, $64 million extension that includes a 10-team no-trade clause that kicks in on the back half of the eight-year deal.

•   Hughes, the Devils’ No. 1 draft pick in 2019, has 55 points (20 goals, 35 assists) in 119 NHL games, with the Devils with 31 of those points coming in 56 games played last season when he scored 11 goals and tallied 20 assists. Hughes finished second in the NHL last season with 36 takeaways. Hughes has been sidelined for much of this season with a separated shoulder suffered in a loss to the San Jose Sharks on October 19.

•   Even with Hughes getting paid by the Devils, the NHL’s player salaries continue to be dwarfed by the other major professional sports in the U.S., especially baseball.

Max Scherzer will be making $30.8M more than Connor McDavid this year.

•   Max Scherzer pitches once every five days, and he’ll make $43.3 million next season, while Connor McDavid, who skates night in and night out for 82 games (plus the playoffs), will make $12.5 million this season… YIKES.

•   Anywho, that’s it for today. I’ll leave you with this bit of bite (pun intended):