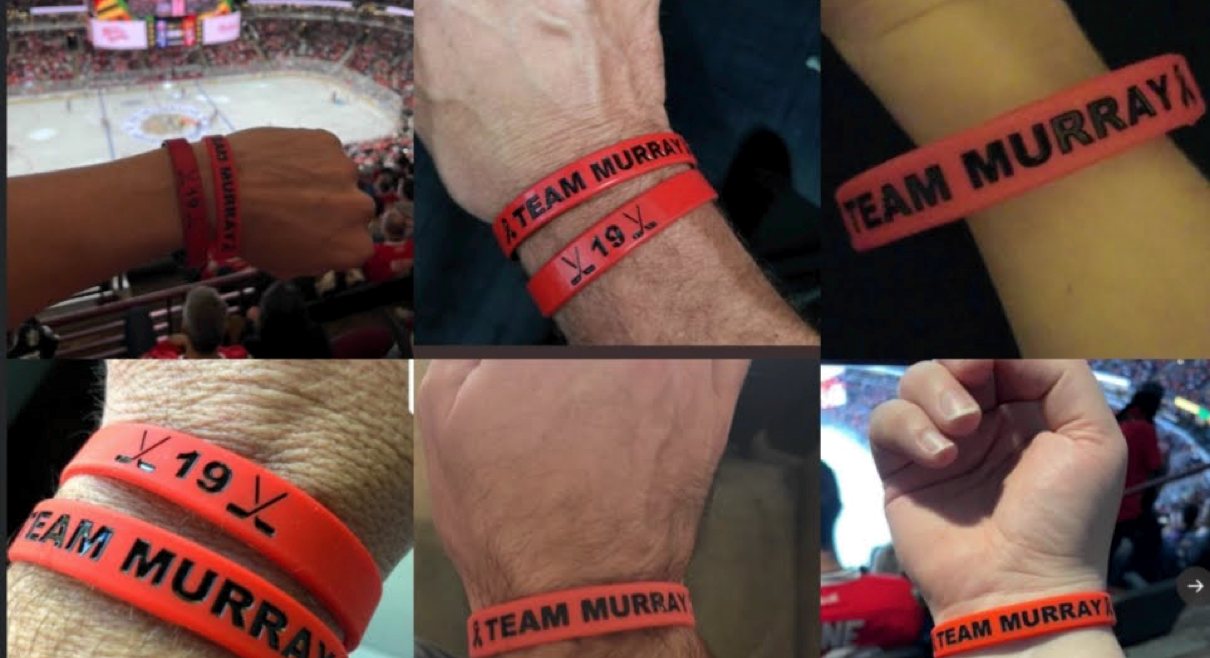 (The following is a guest post from Tessa Martyn, on a subject of personal importance to Blackhawks fans. Thank you to Tessa for sharing.)

In August of 2021, former Chicago Blackhawks center and longtime radio color analyst, Troy Murray revealed that he was diagnosed with cancer.

After hearing the news, friends and fans felt helpless, including Katrina Vlasich from Brookfield, Illinois.

“It’s hard to listen to the radio and not hear Troy’s voice. There’s something missing,” said Vlasich.

In 2019 during #HockeyFightsCancer night at the United Center, Vlasich brought her friend Nina Zdravev, a cancer survivor to the game. When the WGN broadcast team saw Zdravev walking up to her seats in the “Neighborhood” section of 318, they stood up and clapped for her.

Knowing how much gestures can make a difference to those battling, Vlasich decided to show her own support for Troy Murray by creating and sharing wristbands to bring awareness to Troy’s battle and show their support during these trying times.

“One of the guys that made my friend and me feel so special that night is fighting his own battle and it’s kind of crazy that we are not doing something to raise awareness and show support for him during his battle,” said Vlasich. “… It’s not about me, it’s about Troy.”

On September 18, Chris Boden tweeted a picture wearing a #TeamMurray wristband on Twitter and it went viral. Since then, the tweet has gotten over 115 likes and 38 retweets.

As @NHLBlackhawks begin camp next week our support continues for @muzz19 Thnx to superfan/listener @TR1N1TY3 for designing/ordering these for Troy, his fam & all those who work (& have worked) closely with him @WGNRadio . RT & ♥️ to show we're with him #TeamMurray #Blackhawks pic.twitter.com/afuJ8RxT7T

Since the month of October, Vlasich has given out over 100 #TeamMurray wristbands to Murray’s fans and multiple media personnel across sports.

On November 28, Vlasich collaborated with the Chicago Blackhawks during #HockeyFightsCancer night where she sold #TeamMurray wristbands in the East Atrium during the pre-game Purple Carpet Celebration, with all proceeds going to charity.

#TeamMurray is continuing to grow throughout the season, and Vlasich is restoring faith in humanity, one wristband at a time in support of Murray and his current battle with cancer.

Fans interested in ordering a #TeamMurray wristband can contact Katrina via her twitter handle @TR1N1TY3 or a dedicated email she just created: teammurray19.bands at gmail dot com.