Kyle Davidson’s first trade deadline as General Manager of the Chicago Blackhawks is in the books, which means it’s now time to take an early look at how the rookie GM performed.

The grades below are based on the moves as they stand today, taking into account the player (or assets) dealt away, how they fit with the rebuilding Blackhawks, and the current and future value of the assets coming to Chicago in return.

Let’s get into it, starting with the blockbuster that kicked things off for the Blackhawks on Friday afternoon.

We discussed why trading Brandon Hagel was probably a necessary evil, and most of you disagreed. Heck, Jonathan Toews didn’t even agree with the move. But evidently, Kyle Davidson did. Davidson had discussions with the Toronto Maple Leafs late last week regarding a package involving Hagel and Marc-André Fleury. While that didn’t materialize in the end, the Tampa Bay Lightning came calling on Hagel with a package that Davidson couldn’t refuse.

The Lightning sent Taylor Raddysh, Boris Katchouk, and two first-rounders (in 2023 and 2024) in exchange for Brandon Hagel and two future fourth-rounders. That little detail is why I didn’t give Davidson a perfect grade on this trade. Keeping those future fourth-rounders would have been ideal in an ideal world, but that’s a minor concession in an otherwise fantastic haul for the Blackhawks.

Taylor Raddysh and Boris Katchouk are former second-rounders who are on the first year of three-year deals and will now have a shot to prove themselves with the Hawks. Raddysh has the higher ceiling as a potential top-six forward, while Katchouk looks more like a bottom-six forward with some physicality. Raddysh has looked great in a Hawks sweater (albeit in a super small sample size) with a goal and an assist in his first two games, and Katchouk has come up just short on a couple of scoring chances thus far.

The two first-rounders will be later-round picks in the first round, but first-round picks nonetheless, and in a pair of draft classes projected to be pretty deep. Overall, the Hagel trade was an excellent move for the Blackhawks and has the potential to be the kick-starter that this organization needs as they embark on their rebuild.

Davidson stuck it out until the waning hours of the deadline to strike a deal that worked for the Blackhawks and Marc-André Fleury. Make no mistake, the way that Kyle Davidson navigated this process will be a huge selling point for future players mulling offers from the Chicago Blackhawks.

Fleury’s agent Allan Walsh said that Kyle Davidson was in constant contact with Fleury and worked hard to find a deal that worked for everyone. Walsh tweeted after the trade that the Blackhawks were “wonderful to Marc-Andre Fleury and his family.”

That’s some seasoned savviness from a young pup general manager that netted the Blackhawks a 2022 second-rounder that can convert into a first-rounder, but he did right by one of the greatest and most well-liked NHL players ever. The Minnesota second-rounder can convert to a first-rounder if the Wild advance to the Western Conference Finals this season and Marc-André Fleury wins at least four games in the first two series.

The Blackhawks’ final move of the day was a swap with the Calgary Flames that sent Ryan Carpenter to Calgary in exchange for a 2024 fifth-rounder. This isn’t the sexiest move that Davidson could have made, but capturing a fifth-rounder for a fourth-line center isn’t a bad return, either.

Carpenter will provide the Flames with a gritty veteran presence in their bottom-six as they gear up for a playoff run. The Flames are leading the Pacific Division, and they’ll benefit from the addition of Carpenter at a pretty affordable price.

Honestly, I’m going to give Davidson a mediocre grade on this one, but that in no way indicates that I don’t like the trade. 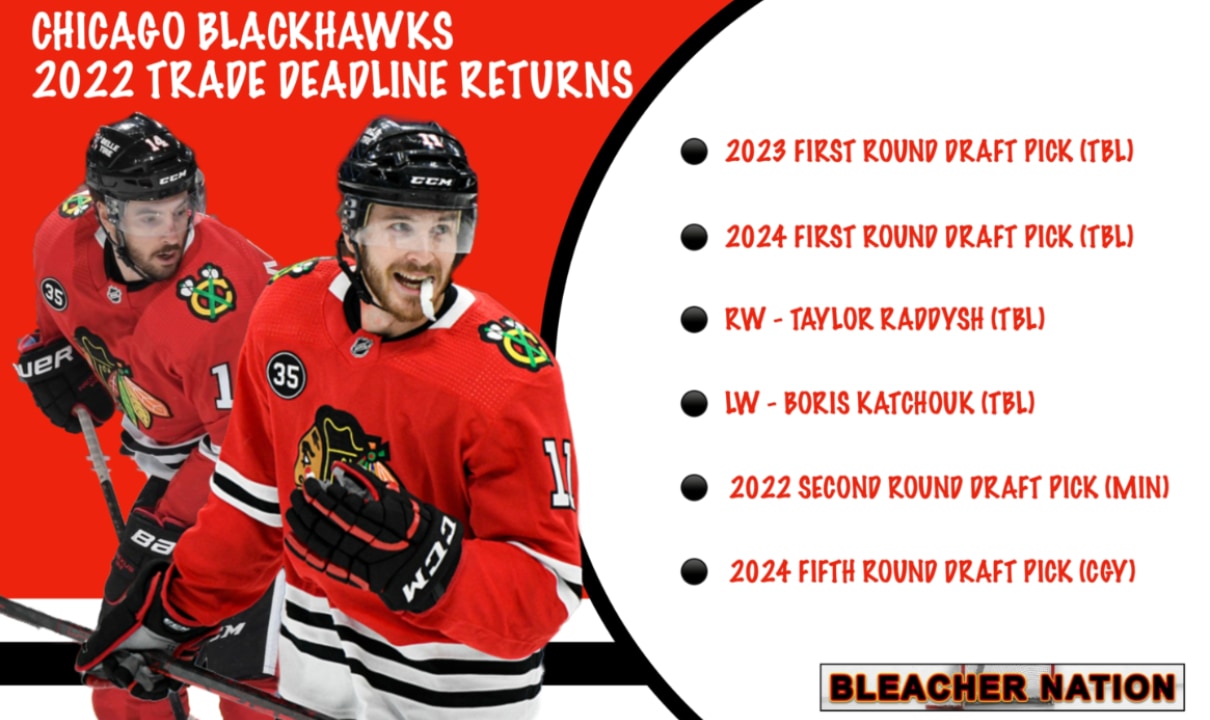 Davidson did well in the trades that he executed this weekend. While I think that he might have left a little on the table by not flipping guys like Calvin de Haan and Dominik Kubalík, he might have gained from making it known to the league that he’s going to be firm on the valuation of his roster, so good luck calling his bluff in future deals.

All said and done; it was an impressive first go at it for the 33-year-old GM.