On a rainy Thursday night in early-May when my wife had work to do so I couldn’t disappear to see the new Marvel masterpiece in a theater, the National Hockey League provided four playoff games to help me fill a few hours and support my insomnia.

Sadly, while our Blackhawks aren’t in these playoffs, you couldn’t watch any of the games without seeing a familiar name last night. Indeed, there were five former Hawks on four of the eight teams in action last night. We’ll update their performances in a little bit. But first a few other nuggets of note.

•   Earlier this week, Scott Powers at The Athletic wrote a really good story about the year defenseman Ian Mitchell spent developing in Rockford. One quote from Mitchell was telling:

“I think I’ve always been an offensive player and now I think I’m really strong two-way player where I can be on the top penalty kill and can be on the power play,” Mitchell said. “Whatever the coaches needed me to do, I can play that role. Of course, everyone loves getting points and scoring, but I’ve taken a real onus and a real enjoyment of defending too this year. So I really feel like I’m rounding up my game.”

•   I’ve been a huge fan of Mitchell’s since he was a freshman at the University of Denver. He arrived on their campus with Pioneers coming off an NCAA championship and immediately emerged as a top-pair, every-situation defenseman. Lots of scouts raved about the maturity of his game as a teenager. With his time in Rockford this year it appears that maturity is showing itself valuable once again.

•   The Hawks’ first and second-round picks from last summer’s draft, Nolan Allan and Colton Dach, met with the media in Rockford on Thursday to discuss becoming professionals and their seasons in juniors. The IceHogs host Texas in the second game of their playoff matchup at 7 PM CT on Friday night.

•   How’d the former Blackhawks do in their playoff games on Thursday night?

•   Fun fact about your new Hawks writer here at BN: I have written two books about the Blackhawks. My most recent book, Chicago Blackhawks: An Illustrated Timeline hit shelves in October of last year. The greatest anthem singer on the planet, Jim Cornelison, wrote a marvelous foreword for this book. It’s a photo-driven history of the franchise from 1926 to the end of the 2020-21 season. Give it a look on Amazon! 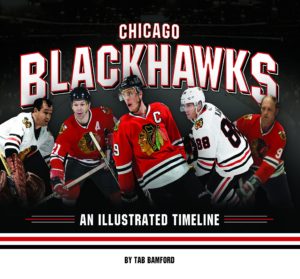 •   The checkbooks were out in Boston on Thursday. The NHL’s Department of Player Safety handed out $5,000 fines to both Brad Marchand for slashing Pyotr Kochetkov and Derek Forbert for slashing our old friend Teuvo Teravainen. Carolina has a 2-0 series lead on the Bruins. They play the first game on Friday night on TNT.

•   As we wait for the NHL Draft Lottery next week and, ultimately, the actual draft to come around in July, we can start staring at names in a vacuum. NHL Central Scouting released their final rankings of the top prospects entering the upcoming draft on Thursday. Let us know who you want!

•   This one hurts on so many levels…