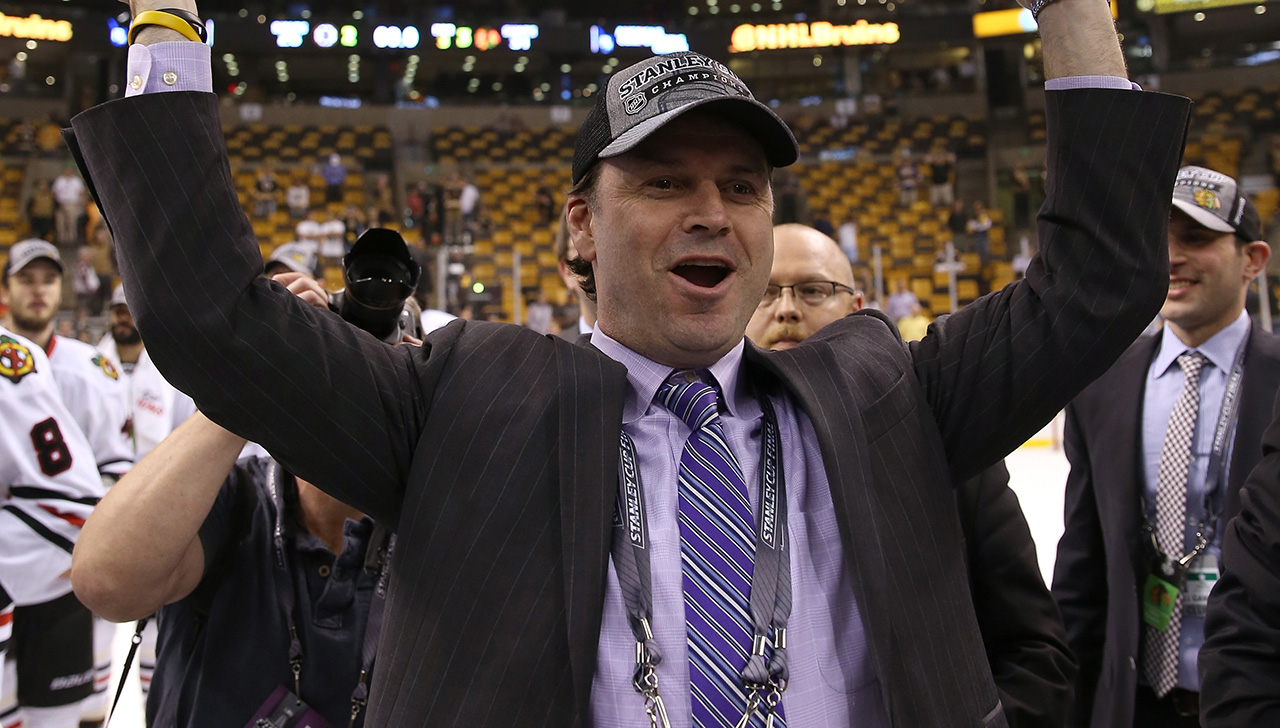 When the Blackhawks’ new front office met with the media on Tuesday, there were a couple of young guys on stage with a seasoned veteran.

“Veteran” is the best word to describe what Norm Maciver brings back to the table in his return to Chicago. His resume is unique. Maciver appeared in exactly 500 regular-season games as a defenseman and served as an assistant coach for the Bruins during the 2003-04 and 2005-06 seasons. He then joined the Blackhawks’ front office in 2008 and was part of the brain trust that built a dynasty.

Maciver left in an unsurprising divorce with Stan Bowman’s group last year. He joined the Seattle Kraken’s inaugural front office in January of 2021 as their director of player personnel and helped guide them through an expansion draft, free agency, and the 2021 NHL Draft.

Now, he’s back in Chicago where he joins two gentlemen who are 20+ years his junior in a new front office dynamic.

Maciver repeatedly used the word “experience” when asked what he brings to the table in his return to the Blackhawks’ front office. He’s been on the ice, behind the bench, and worked in hockey operations for more than a decade. He’s been with a good — great — team at its peak, and then started from scratch in Seattle this past year.

I asked Maciver what he took away from his year helping the Kraken start a franchise from absolutely nothing but a logo. His answer reinforced a lot of what general manager Kyle Davidson has preached since taking over as the permanent GM: patience, communication, and culture.

“The whole expansion process was really interesting and a fun project to be a part of,” Maciver said. “The thing I took away was… [we were] starting something new, so it’s like ‘how do we want to get this thing started.’ We knew we weren’t going to get elite talent from the get-go… so the culture and the types of players we wanted to bring in right away to set the foundation in Seattle [were important] so when we brought in the right players you’ve got a structure in place where they’re going to be able to flourish in a way you want them to flourish. That was the whole mindset in Seattle last summer. Make sure we get the right players.

We knew the team was going to struggle to score goals, to win games was going to be challenging, but if we have the right pieces in place so when we do get elite talent, it’s in a real comfortable environment where they can grow and be better and the team can take the next step forward.”

These comments from Maciver were perfectly in step with how Davidson has spoken about his vision for the team moving forward, and it certainly is in line with how Dale Tallon built the Blackhawks before he was unceremoniously replaced by Bowman. When you look back at the “culture” guys Tallon brought in to compliment his core, names like Andrew Ladd, Patrick Sharp, and (eventually) Marian Hossa jump off the page.

Coupled with what Davidson said about how the team is approaching the upcoming 2022 NHL Draft, it’s become clear that the Blackhawks are looking to start with foundational players who establish a culture to build in, not around.

Maciver also shared that he and Davidson are “big baseball fans,” so the conversations they have had with Jeff Greenberg have been interesting. They have discussed his perspective on roster building, maintenance, and management. There is an inquisitive nature to the collaboration happening in the front office, with Greenberg’s analytics background in baseball and Maciver’s experience informing the decision-making process.

Where will Maciver’s experience benefit the new regime most?

“The whole process,” he said. “The patience and understanding of the strengths and weaknesses of our team and organization are, where we have to get better… all those things that having someone with experience on both ends of the spectrum [can provide].  Hopefully we can keep that perspective — patience is going to be important to make sure we make good, sound decisions for the organization [and] that we use a lot of common sense and think things through and not rush to judgement in certain situations.”