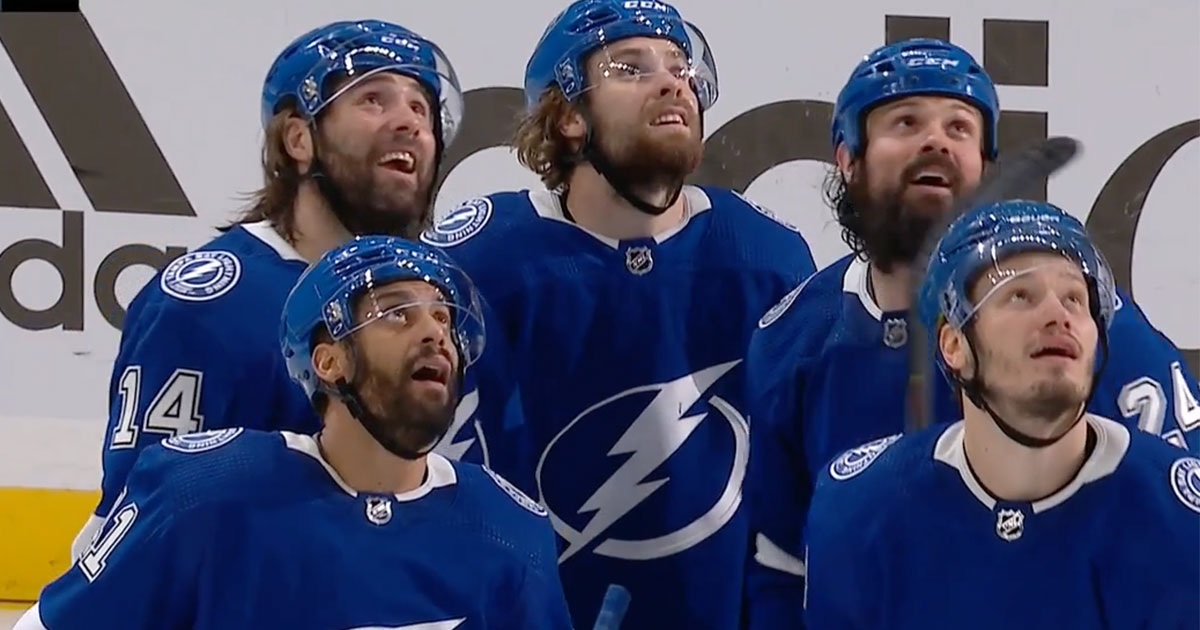 We have our first contestant in the Conference Finals for the NHL. Tampa Bay is one step closer to their third consecutive Stanley Cup Final after last night’s win. We’ll dig in on that in a bit, but what they’re doing is pretty amazing. Blackhawks fans should appreciate the excellence of the Lightning organization from top to bottom… and feel confident their first-round picks in the next two drafts won’t be in the top ten (which means they’ll end up belonging to the Hawks).

•   Yesterday the Blackhawks signed a free agent defenseman from Sweden, which adds another body to an already-crowded blue line. We examined how the organizational depth looks heading into an important first summer for GM Kyle Davidson.

•   Lukas Reichel continued his solid play for Germany at the World Championship on Tuesday morning (our time). He skated 21:26 and picked up another assist in Germany’s 4-3 loss to the Swiss, who won Group A with the victory. Reichel won five of 14 faceoffs in the game.

•   The early game on Monday night saw the Florida Panthers do everything except score for three periods. Of course, that’s because Andrei Vasilevskiy isn’t human and is playing at a level we have never seen before in the postseason.

Vasilevskiy has clinched six of the last seven series with a shutout, passing Clint Benedict (5) and Chris Osgood (5) for the most in NHL history. #GoBolts have won 10 consecutive #StanleyCup Playoff series.

•   The Panthers actually challenged two would-be Lightning goals and won. But they still lost the game.

•   Jumbo Joe Thornton dressed for the Panthers and skated a little more than six minutes in the game. If he retires, he’ll be in the same Hall of Fame class as his long-time teammate and draft classmate Patrick Marleau. And last night’s appearance might be the last time a player born in the 1970s appears in an NHL game.

•   The nightcap saw the Avalanche in St. Louis, where an on-ice collision led to off-ice concerns. Nazem Kadri skated/was escorted into Blues netminder Jordan Binnington in the previous game, leading to a knee injury for the goalie that will cost him at least the rest of this series. Kadri has a history of cheap shots, including a dirty one against the Blues last year, so the Blues and their fans took exception. Unfortunately, St. Louis fans — who are known for their… hospitality… — opted to make racist threats to Kadri via social media. Not acceptable. And, sadly, the Blues organization said nothing to condemn the threats. Warning: some of the things you’ll read in the shared posts below is disturbing.

nazem kadri's wife just shared a sampling of the type of shit they've been getting on their social media accounts and these people are disgusting. honestly good for her for not redacting names and photos. pic.twitter.com/cf126jWNVD

•   So what does Kadri do with the Blues’ team wanting blood and the fans making threats? He drops a hat trick on them, leading the Avs to a big road victory and a stronger lead in the series.

This is honestly getting so damn funny now lol #GoAvsGo pic.twitter.com/GAJdwel8uL

•   David Perron, who had two goals for the Blues, mugged Kadri and received a penalty that led to Kadri’s second goal of the night just as the subsequent power play ended. As he left the box and Kadri scored, Perron swooped in and tried to put an elbow into Kadri’s head. It’s unlikely the NHL’s Dept. of Player Safety will look at it because the Blues rarely get slapped on the wrist, but the elbow was a failed attempt at a dangerous play.

Perron isn’t dirty?? Give me a break! pic.twitter.com/F8wmd9GRaV

•   The Blackhawks are going to play a game in Milwaukee this coming season. Not quite as appealing as the Bulls’ heading to Paris.

The Chicago Bulls Are Playing a Regular Season Game in Paris Next Year!https://t.co/xPWrmL8Hl1 pic.twitter.com/qBaGHZ2V3f