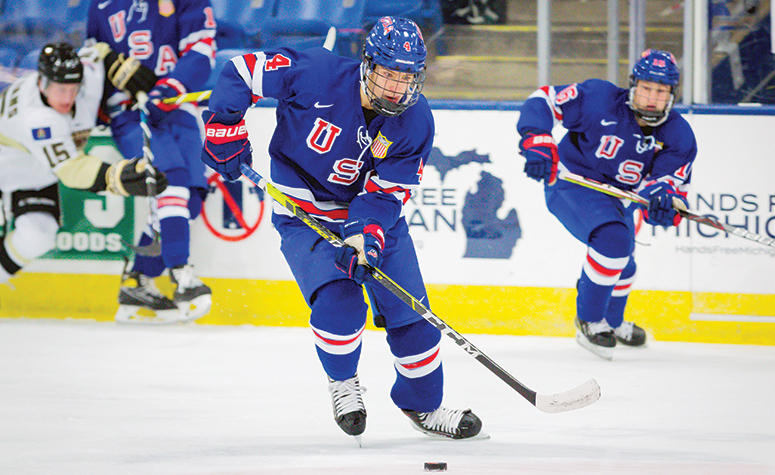 The 2022 NHL Draft begins on July 7, but only the first round will take place that night. While the Blackhawks currently don’t have a selection until the second round — in which they’ll have two picks — there is always a chance the Hawks will move up. The front office has indicated they would be open to move up.

So which players could be on the Hawks’ radar when they’re on the clock for the first time (which, right now, will be at pick No. 38)?

In the coming weeks leading up to the 2022 NHL Draft we’re going to profile some of the young players who might be the right fit in the eyes of the Blackhawks’ front office. We’ll begin our profiles today with a name that sounds familiar, but it’s a different player than the one who already has two brothers in the NHL.

“Hughes is one of the more skilled and creative players in the draft. He has high-end puck skills and ability to improvise with the puck to create chances for himself and his teammates. He’s able to score goals but he’s a pass-first type player. Hughes lacks ideal speed for the NHL and the pace of higher levels will be his main test. He competes well enough. He won’t run guys over but he’s responsible off the puck and doesn’t shy from physical play. Hughes projects as a bottom-six forward.”

“Hughes is a prospect I’ve liked whenever I’ve watched him play over the last three seasons. He makes his linemates better and does a great job manufacturing shots and chances for himself (which I’d insist he has always done even when his production skewed toward the assist column at the program). I see a diligent two-way centre who skates well enough (this quality is underrated by some, I’d argue), possesses excellent hands, has a great deal of poise and vision under pressure, and thrives as a distributor (especially finding backdoor options). He doesn’t have star power, but I won’t be surprised if he becomes a heady, playmaking pivot who knows where to be and how to use the ice in order to reach his middle-six upside in the NHL. I expect him to take a step and produce more as a sophomore. The skill is there.”

From Last Word on Hockey:

“Hughes is an effective playmaker. He has very good vision and hockey IQ. Hughes is willing to be very creative with his passes, attempting to make passes through tight passing lanes, or a saucer pass over an opponent’s stick to get the puck to a teammate. This type of risky play can sometimes lead to turnovers, but also leads to creating a number of scoring chances as well. He does a good job of making give-and-go passes and working in the cycle game.

Hughes gets in quickly on the forecheck and forces opposing defenders to make mistakes. He will throw a hit to try and make a play. He is also willing to battle on the boards for loose pucks. However, Hughes’ lack of size and strength is still a limiting factor. He should be able to add muscle to his frame and this will improve this aspect of his game.”

“I describe myself as a playmaking forward and I think my two biggest assets are my skill and my hockey sense,” said Hughes, the highest-ranked NCAA player on Central Scouting’s midterm ranking. “I like to make plays, and I think I make players around me better.”

“In situations where he might be slightly further away but still in tight proximity of the puck carrier, he will lowers his body in the forecheck in the corner to trap the puck carrier and force the carrier to dump the puck. In the corners, he will display physicality and go complete shoulder checks… Hughes is also defensively responsible in the offensive zone. He will drop back towards the blue line and into the neutral zone if the defender pinches up with the puck but then looses possession. Hughes drops back to ensure that the other defender is not on his own to defend the rush.”

Is Hughes a fit in Chicago?

There are a couple areas where we can begin analyzing prospects without a draft track record from the new front office. What kinds of players have they acquired via trade? And what has Davidson (and others) said about what they’re looking for in players they target in the future?

One potential red flag with Hughes’ profile is his skating. Both Davidson and Norm Maciver have immediately pointed to speed as an attribute they’re trying to attain moving forward. Pronman and others have noted his skating is below average, so that might be a reason the Hawks would move him down their board (to maybe later in the second round or lower).

However, the Blackhawks have had players make significant contributions in the past who weren’t great skaters. The first name that comes to mind in that regard is Troy Brouwer, who worked hard into making himself a viable NHL player and enjoyed a solid career.

Another issue might be his size. Davidson has acquired size in each of the trades he’s made as GM thus far, and Hughes being listed under six feet tall might be an issue as well.

However, he’s a center whose puck skills are graded very well by scouts and analysts. And we saw the impact Dylan Strome made in spite of his below average speed as a top-line center with Patrick Kane and Alex DeBrincat. Yes, Hughes is a smaller player than Strome, but if you’re looking to inject some creativity in the offense of the squad Hughes might be a good fit.

Another item to keep in mind is Hughes is already playing at the NCAA level. The Blackhawks won’t be looking for an immediate impact player in the second round, so Hughes could have as many as three more collegiate seasons to work on his skating and development before turning pro.