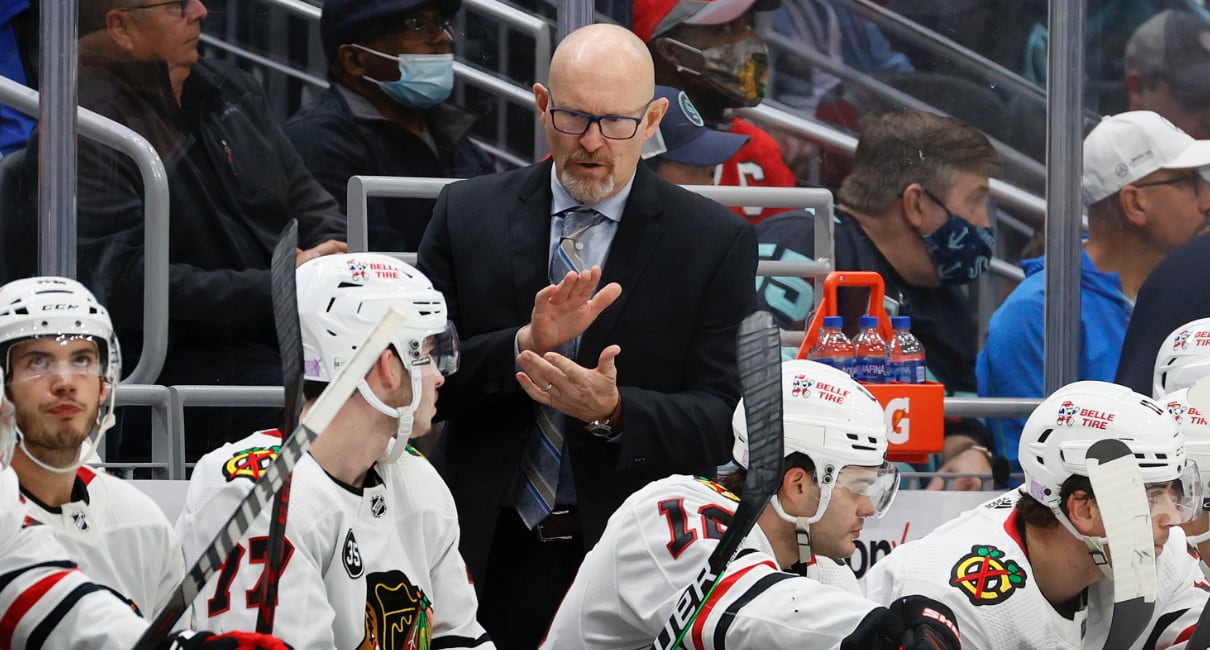 Over the past couple weeks we’ve been discussing some potential head coach candidates for the Chicago Blackhawks. The front office indicated early this offseason that their plan is to build a profile for the next head coach before putting names on a list, but that hasn’t stopped us from putting together our wish list.

General manager Kyle Davidson did indicate to the media at his last media availability that Derek King will be part of their consideration set when they do begin interviewing for the job. But thus far we have added five additional names to the list:

With those six (including King) in mind, what would our profile for the next head coach look like?

When you look back at all five of those profiles, you’ll note that all of them have experience coaching at a number of levels. Quinn made the jump from college to the NHL with the Rangers to babysit their rebuild before Gerard Gallant was hired. Sturm worked in the building stages of putting Germany on the world hockey map, helping grow their national program. And the other three have experience in juniors and the AHL on their resumes.

This should be a critical part of the Blackhawks’ next head coach. With the organization entering a rebuild (for real this time), a player who has experience growing younger players and preparing them for the next level(s) is important. Additionally, working with high level talent should be an important aspect — and all five of our identified candidates have done that across their careers.

There is also the element of identifying the right kind of player. As we noted in our profile of Velluci, he was a big promoter of Sam Lafferty while he was in the Penguins’ organization; Davidson signed Lafferty to an extension since acquiring him this past season. Recruiting, signing and playing the “right” players look like on the ice is something Davidson’s front office has spoken about a number of times since the season ended.

Davidson and Norm Maciver have spoken about building the culture of the Blackhawks’ organization on and off the ice. Obviously the off-ice culture with the Blackhawks is in the process of an overhaul it the wake of the Kyle Beach report coming to light. And equally obvious, the organization’s approach on the ice needs to be built almost from scratch at this point.

If you read the backgrounds of the five candidates we profiled, each has played a role in an organization that has either worked to redefine its culture or with one that has a strong structure already in place. Lalonde, Carbery and Velluci build and defined that culture at lower levels and matriculated to NHL programs that were defining their own culture; Tampa and Pittsburgh have clearly established “who they are” as organizations.

If you’re familiar with the hockey culture in Boston, Quinn’s work at BU was noteworthy; that’s a tough market and he recruited and developed elite players. And Sturm’s work with Germany’s national program was an important element as well.

The third element we identified with our five candidates was one that should be painfully obvious: win games. Each of these five coaches has played an important role with organizations that have been successful.

Quinn made BU a national championship contender and then did a good job of turning the Rangers’ around. Sturm has been an important part of the Kings’ renaissance. Lalonde, Carbery and Velluci were incredibly successful with their junior clubs. And each of the five has been recognized for their success at various levels.

Everyone understands that winning is going to be tough for the NHL level of the Blackhawks’ organization for a period moving forward. But, getting back to the culture trait, having expectations for performance and work ethic are things a coach can instill with a roster that isn’t ready for the next step — yet. If you don’t have the talent of the other team, that doesn’t mean you should be an easy opponent. So coaches who expect winning will, in theory, make the Blackhawks a team that’s at least a tough out every night.

What about the Blackhawks’ profile?

All three played in the NHL at some point. All three have been assistant coaches in the NHL primarily since their playing careers ended; Reirdan and Shaw have had a cup of tea as head coaches in the NHL (two years for Reirdan, 40 games for Shaw). And all three are north of 50 years old.

While the Blackhawks haven’t gone public with their profile, what we can take away from the three names that have been linked to the organization is that the Blackhawks aren’t necessarily looking for someone with a lengthy head coaching track record in the NHL. But all three of these potential candidates have been NHL assistants for a while.